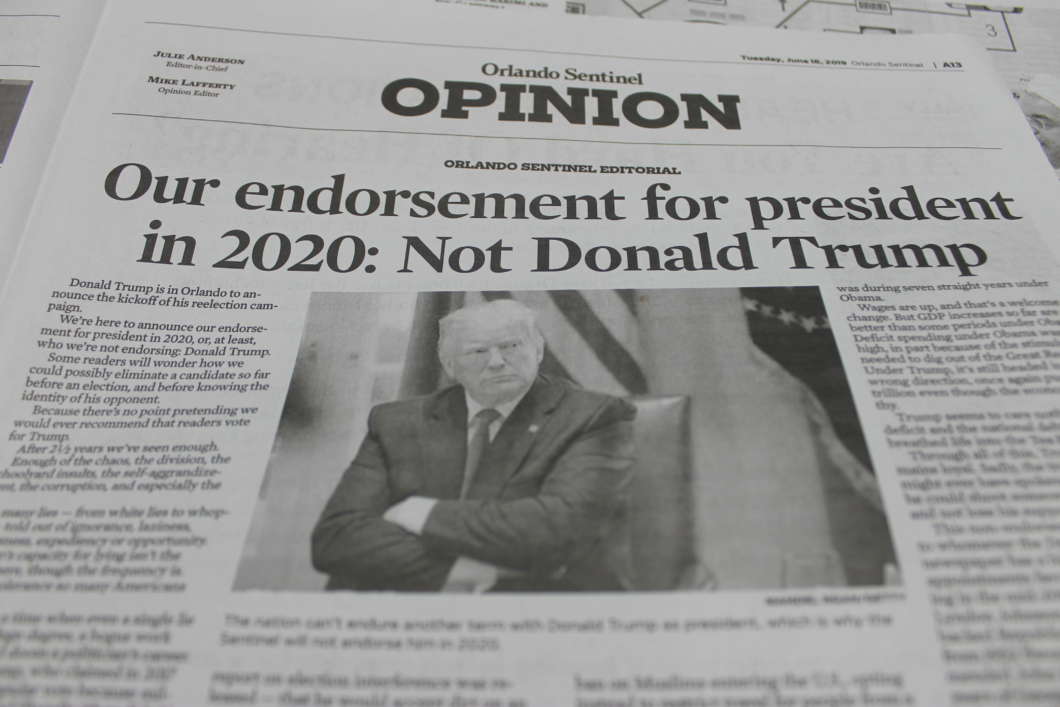 The Sentinel has fielded about 1,000 emails, hundreds of calls and even a fax since publishing its 'non-endorsement' last week.

Responses poured in after the editorial, which was posted at 5:30 am. By the week’s end, the Sentinel had received about 1,000 emails, with opinions split “about 50-50.” They also received about two hundred phone calls in “2-1 in opposition to the editorial,” one handwritten letter and one fax from readers.

The Orlando Sentinel’s opinion editor Mike Lafferty sat down with 90.7’s Matthew Peddie to talk about the non-endorsement and the response from readers.

“This was a statement of values,” Lafferty said.

“We really believe in the truth. If you look at what this president has done over the past two and a half years, it is, as we described in the editorial, what amounts to an assault on the truth. Just on a near daily basis. Just lies that you just cannot explain why he would say them. One of the examples we gave in the editorial, ‘Windmills cause cancer.’ Why would you say something like that? If you don’t like alternative energy sources, say it. But why fabricate something that has no basis in fact?”

When asked about whether there were concerns about the editorial’s impact on subscriptions, Lafferty says it was a concern but it wasn’t an influence on whether to run the editorial.

“Once we start deciding what to write because of how it’s going to be judged by our readers, favorably or unfavorably, I kinda feel like we’ve lost,” Lafferty said.

As the 2020 presidential election draws nearer, the Orlando Sentinel’s editorial board will have to decide if it will endorse anyone and if so, whom.