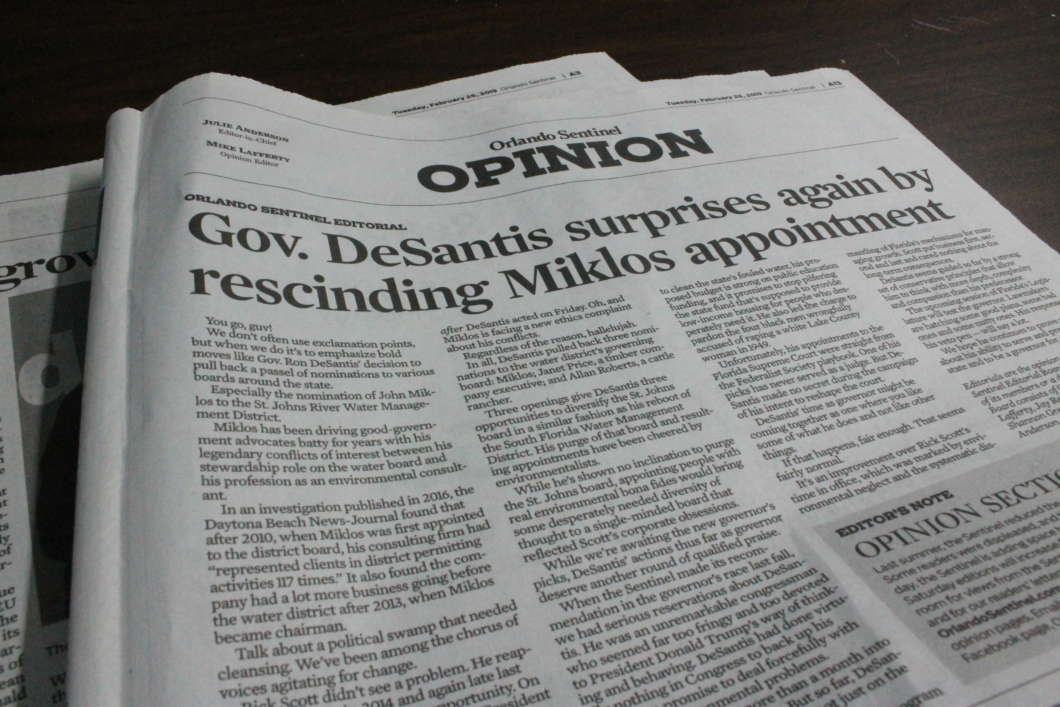 Last November, the Orlando Sentinel announced new editorial leadership in an effort to increase its readership and focus more on local reporting. Orlando Sentinel editor in chief Julie Anderson and opinions editor Mike Lafferty stop by Intersection to discuss the motivation behind the Sentinel’s changes.

Anderson, who also serves as editor-in-chief of the South Florida Sun Sentinel, replaced Avido Khahaifa as editor-in-chief of the Orlando Sentinel. She says the Sentinel’s renewed focus on local reporting came out of an effort to combine forces from both newsrooms to better report on topics that can “cross geographical boundaries” like state politics, environmental issues and public health.

“We thought that by joining reporters and editors together in those topics that we could kind of elevate our stories and really have an impact on the state,” Anderson says.

Anderson says the new leadership is looking to cover topics like the red tide on Florida’s shores that will appeal to both the South and Central Florida markets. And she says having two news teams works to their advantage.

“It just helps to have reporters with different ways of approaching things,” Anderson says. “One reporter might be really good in investigative reporting and digging into public records, and another one might have some really good sources in a particular area. If you combine those two areas of expertise then you really can get somewhere pretty fast.”

Lafferty, who had been working as a freelance reporter since accepting a voluntary buyout from Tribune Publishing and leaving the Orlando Sentinel in 2016, says that Anderson and publisher Nancy Meyer’s  commitment to revitalizing the newspaper’s opinion content brought him back.

“[Anderson and Meyer] decided to fill the opinions editor job again, so what I saw was kind of a renewed commitment to value of having different expressions of opinion on those pages, but also to have a strong institutional voice which we think is important,” Lafferty says.

Lafferty says that while the role of opinions sections at newspapers has shifted with more existing news options, the Orlando Sentinel is focusing on making an impact by reporting editorial opinions on hyperlocal topics like the state legislature and county commissions.

“The landscape [of opinions sections] has changed,” he says. “People have a lot of choices. They have a lot of different places they can go to find opinion. Where we think we can have more impact is opinion on a state and local level.”

“I wanted to bring that to Orlando as well and make sure that we have that same effort and dedication to putting a spotlight on corruption, abuse of power [and] all that good stuff, so that’s really what I would like to bring to Orlando,” Anderson says.