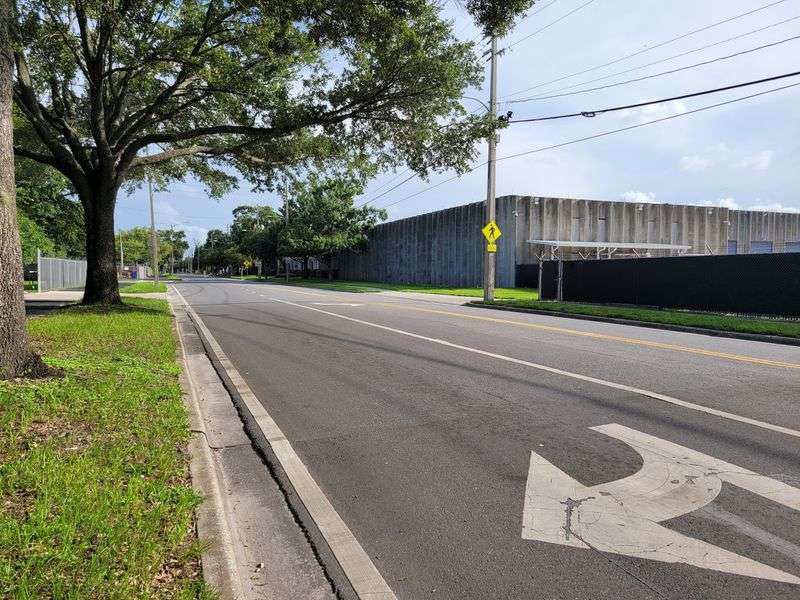 A strip of Westmoreland Drive in Orlando was used to test a pavement treatment that can lower air pollution and temperatures. The city is considering wider use of the technology in other areas. (Trevor Fraser / Orlando Sentinel)

Orlando is looking to be one the first cities to try a new pavement treatment that can reduce certain types of air pollution by nearly half. What’s more, the treatment has the potential to lower ambient temperatures.

The solution also reflects sunlight, thereby reducing what is known as the heat island effect where pavement raises the ambient temperature around it.

“It’s sort of like walking outside wearing a white T-shirt instead of black one,” said Rick Howard, director of public works for the city of Orlando.

Howard explained the use of titanium oxide solutions are not new, just not widespread in the U.S.

In 2018, Orlando was selected along with Greenville, S.C., to be the site of a test of the new pavement by the Texas A&M Transportation Institute, with treatment going to a section of South Westmoreland Drive near Gore Street.

While temperature differences are difficult to monitor on such a small scale, targeted air pollutants were found to be reduced as much as 31%, according to Howard.

Another test of the material was conducted at Orlando International Airport in conjunction with engineering firm Avcon. Two 500-sq. foot sections were injected with the treatment in the cargo area. Judith-Ann Jarrette, an assistant director of airport operations with OIA, said the nitrous oxide was reduced by nearly half.

And that wasn’t the only effect Jarrett saw. “A lot of pavements build up algae,” she said, but the treated areas didn’t develop any.

Orlando is considering a broader use of the treatment, with a proposal on the table for a 2.2-square-mile area around the interchange of I-4 and the 408 Expressway. “We thought if ever there was going to be sources of pollution … we’d probably get our biggest bang for the buck there,” Howard said.

Air pollution has been rising in recent years in Orlando and Orange County. The American Lung Association in May delivered a report stating that particle pollution got worse between 2017 and 2019, though it still gave the county an A grade for it. (Orange County received a C grade for its ozone pollution.)

A larger-scale test of the material would also demonstrate its temperature-reducing abilities, lowering what is known as the heat island effect around paved areas. Howard said if it works to expectations, “it could lower building costs, electricity costs and cooling costs.”