Orlando Remembers The 49 Lives Lost In The Pulse Nightclub Shooting, Five Years On 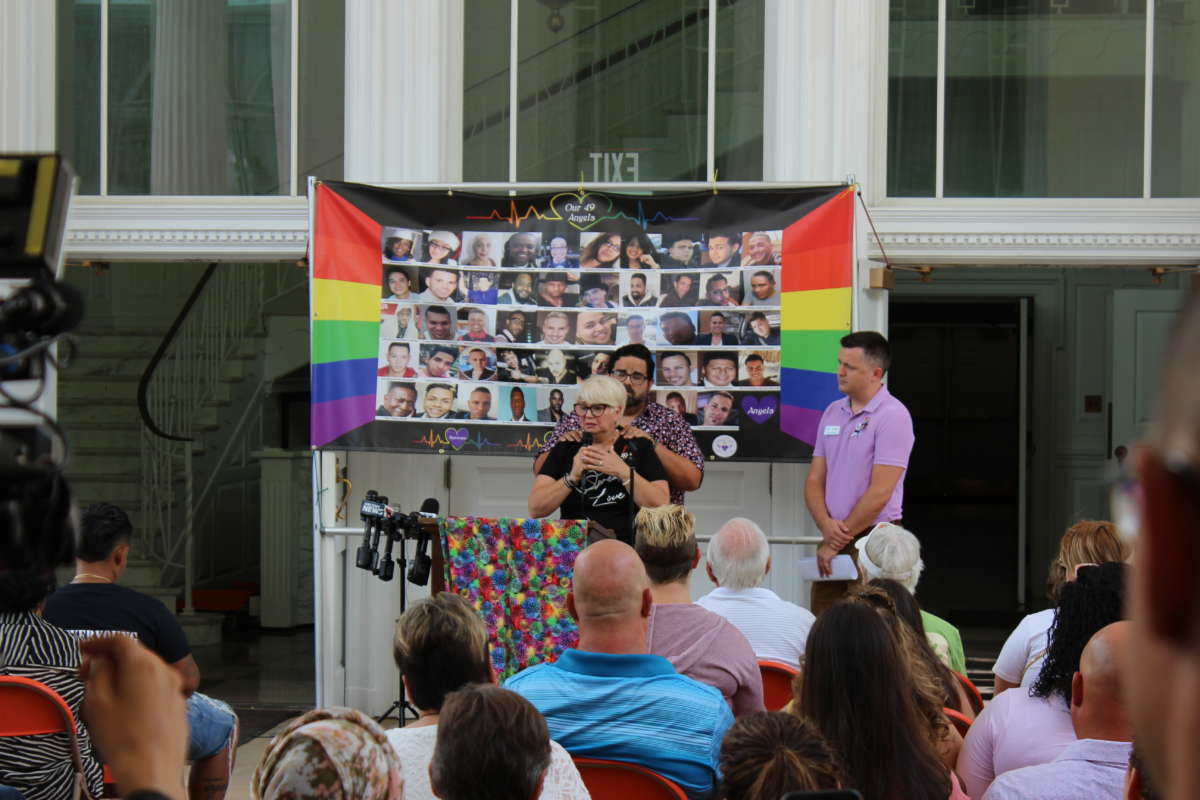 Mayra Alvear supported by her son Brian Alvear at a ceremony at the First United Methodist Church in downtown Orlando where 49 bells were rung. Her daughter Amanda Alvear died in the shooting. Photo: Matthew Peddie, WMFE

Orlando is paying tribute to the 49 victims of the Pulse nightclub shooting, five years ago.

The bell at the First United Methodist Church tolled 49 times as the names were read out.

Family members of the victims, state and local elected leaders and others gathered to pay their respects.

Brian Alvear, whose sister Amanda Alvear died in the shooting, said amid the tremendous sadness and grief there was a “slight bit of joy and happiness, because all of us are here together.”

“Long after us those 49 names will be read out and remembered, and I take solace in that,” he said.

His mother, Mayra Alvear, thanked the church and volunteers for their support.

“I do this because of our children. I will not let them die in vain,” she said.

State Rep. Carlos Smith said it’s not just the annual remembrance on June 12th that can be triggering for people affected by the tragedy.

“What we have learned over the years is that healing, for communities like ours after this horrific tragedy at the Pulse nightclub, healing is not linear,” said Smith.

“There’s lots of ups and downs for so many people who are directly impacted, the survivors, the families.”

On Friday, Gov. Ron DeSantis directed flags at local and state grounds to be flown at half staff in honor of Pulse Remembrance Day.

However, Smith criticized Gov. DeSantis for vetoing $150,000 in funding for a program that would have offered mental health support for survivors of the shooting.

“I mean it was cruel of the governor to do so, but really we’re trying to find funds to plug the hole the Governor DeSantis left when he vetoed $150,00 in funds for Pulse survivors and family members’ resiliency services.”

Smith said he has started a gofundme campaign to raise money for the Orlando United Assistance Center.

State Rep. Anna Eskamani said June 12th should be seen as a day to reflect on the lives lost, but also an opportunity to commit to building a more equitable community.

“When it comes to LGBTQ+ equality, I think the city of Orlando has really been a shining light in the world, not only in the display of pride, but also in standing up for equity with our trans community, equity within supporting organizations like the Zebra Coalition, who are providing the real life needs, just like the Center.”

Eskamani said there is still work to be done to address disparities in mental health, housing and healthcare.

“We have to remember that demonstrating equity is not just about wearing a rainbow shirt. It’s about the systems that have created these disparities whether it’s health care disparities or housing disparities, mental health. We have to also address all these problems that have created the situation where too many of our LGBTQ+ people and too many people who are Black and brown don’t have equal access to opportunities.”

In a statement Saturday, President Joe Biden called the nightclub “hallowed ground”. He said that in the coming days he will sign a bill designating the Pulse Nightclub as a national memorial, and he said more needs to be done to address what he called “the public health epidemic of gun violence in all of its forms – mass shootings and daily acts of gun violence that don’t make national headlines.”