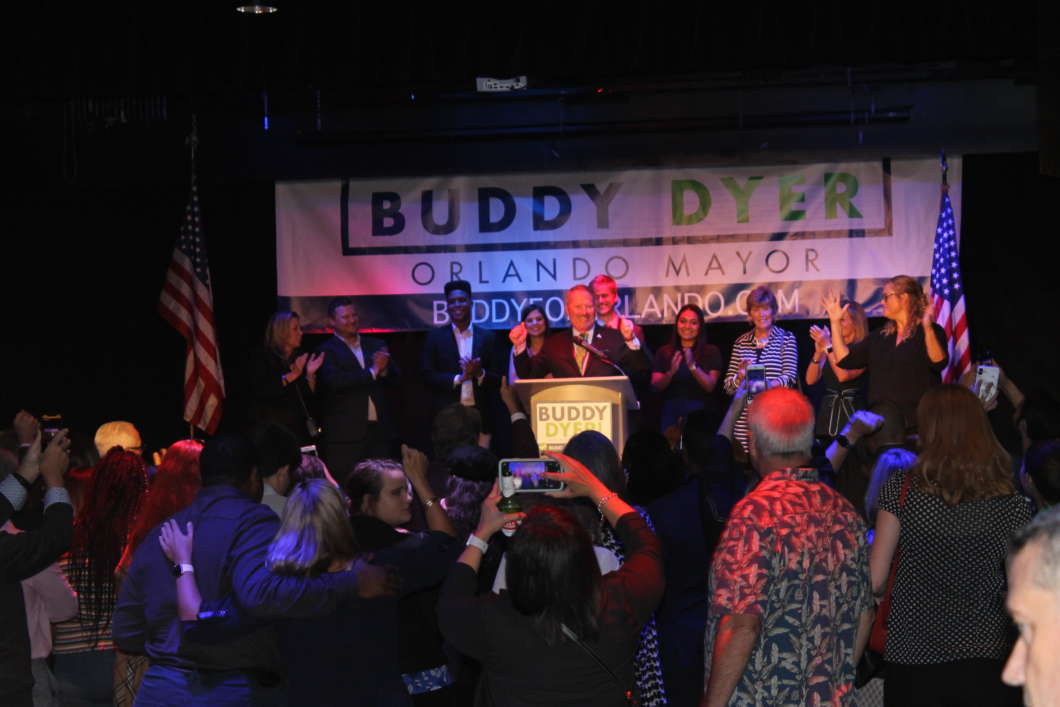 Orlando Mayor Buddy Dyer will serve a fifth term. Dyer was re-elected with 72% of the vote Tuesday night.

“So a couple people said 16 years was too much. But it turns out we’re not done yet!” Dyer told supporters at his election night party at the Abbey in downtown Orlando.

Dyer had faced City Commissioner Sam Ings and Navy veteran Aretha Simons. They had made an issue out of his longevity. But Dyer said Orlando has benefited from his steady leadership.

“The Dr. Phillips Center, we didn’t break ground on it until I’d been mayor for 10 years. Creative Village, I’d been working on that for 15 years. So sometimes you just need sustained energy and effort and persistence.”

He gathered with supporters in downtown Orlando, where the crowd cheered the results. Dyer thanked his family and campaign staff, and said his focus for the next term would include getting SunRail the the airport, finishing the Dr. Phillips Center and working on Affordable housing.

Ings, who stepped down from his city commission seat to run for mayor, won 17% of the vote, and Simons won 11% of the vote.

The race for city commission in District 6 will go to a runoff election on December 3 between Bakari Burns and Gary Siplin.

Burns, who is the CEO of Orange Blossom Family Health, won 46% of the vote and Siplin, an attorney and former state lawmaker, won 39% of the vote. Community activist Lawanna Gelzer won 15% of the vote.

Burns said he stayed positive during the campaign despite being outspent by Siplin.

“At one point I was saying, gee this guy’s raised three times the amount of money I have, but there were several people who said, man, money don’t win races, you need to get out in front of the community, it’s the ground game. So it’s that type of encouragement that kept me, you know, knocking on doors and remaining positive.”