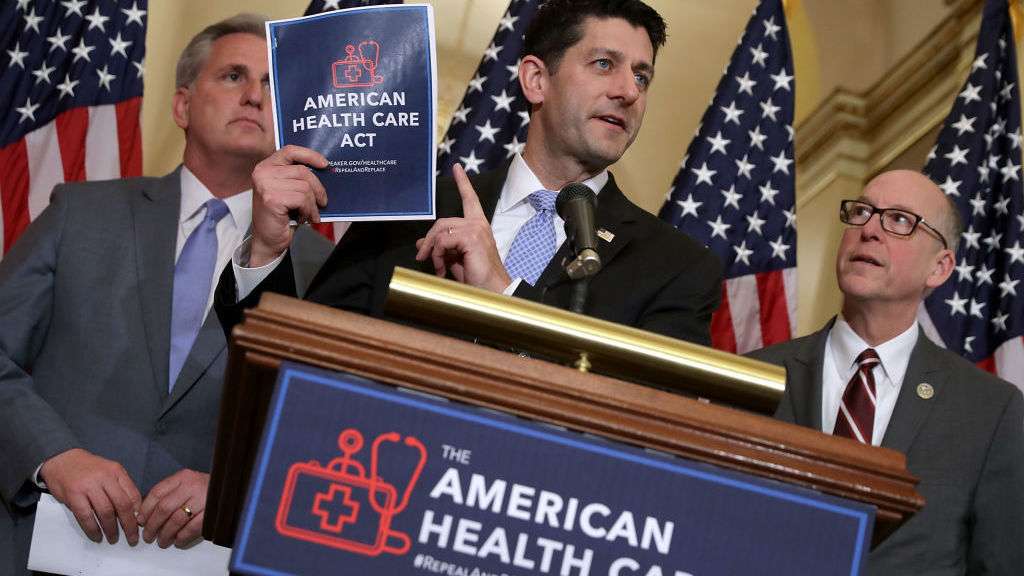 House Speaker Paul Ryan holds a copy of the American Health Care Act, the House Republican leadership's plan to repeal and replace the Affordable Care Act, which is already facing opposition from conservatives in the House and Senate.

With the vote looming in the House on the American Health Care Act, about a dozen rallied against it outside of Senator Marco Rubio’s Orlando office Thursday.

The bill is the planned replacement to the Affordable Care Act, or Obamacare.

Kirk Root, who was at the rally, suffers from cerebral palsy. He said without Medicaid coverage for most of his life, he wouldn’t have had his health needs met.

“Everything from wheelchairs, to crutches, epilepsy drugs, all sorts of things that I need to be able to function,” said Root.

The protestors called on Congress to put the brakes on the GOP healthcare plan so more town halls could be held on how to improve the existing Affordable Care Act.

President of the Orange County Democratic Disability Caucus Tiffany Namey was also there.

“Lets keep in mind that persons with disabilities are the only minority you can join at any time, whether at birth or at any time in life,” said Namey.

One group speaking out is Planned Parenthood. Federal money is already barred from being spent on abortions.

But the American Health Care Act would cut all money to Planned Parenthood. The Congressional Budget Office estimates that cutting Planned Parenthood funding would save $156 million over a decade, but would leave 15 percent of its patients without health care and result in “several thousand” more births.

“We are in deep opposition to that concept because it impacts the most vulnerable of our patients,” Eskamani said. “And we’re going to be out there tomorrow speaking to this and really pushing back against this dangerous legislation.”

Eskamani helped to organize the rally, and said one of those speaking out against the current GOP plan is a Pulse survivor.

“This is a person in our community that has suffered enough,” she said. “The fact that he just got approved for Medicaid and that’s his access to health care and now it’s at risk with these proposals we see from party leadership, it’s just not right. We really need to make sure we’re protecting all Floridians, including those most vulnerable among us.”

Central Florida’s House members are mixed on the legislation: Republican Dennis Ross is a definite yes, all the House Democrats are a no. Republican Bill Posey is a no without changes, and the New York Times reports that Republican Dan Webster has concerns and is leaning against it.