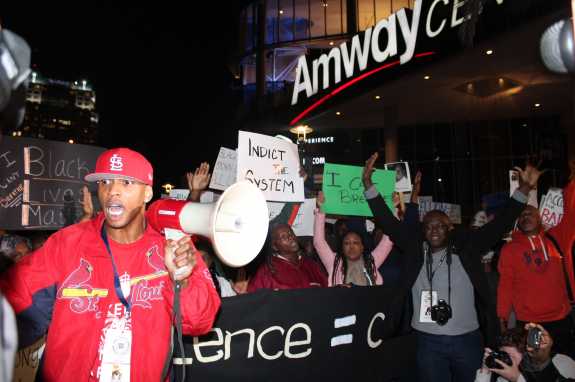 Protesters gathered in front of the Amway Center and staged a "die-in," where they lay on the ground holding signs of black men who were killed by police. Photo: Renata Sago, WMFE.

Krystal Brown was one of dozens that staged a “die-in” in front of the Amway Center. She held a photo of her husband, Marlon Brown, who was killed in DeLand last September when an officer ran him over with a police car—on tape.

“It’s very, very hard when you have the evidence in front of you, but you’re being told that you don’t see what you see. It says the system is definitely unfair. It’s not equal, and that definitely needs to be changed,” she said.

The officer was not charged in killing Brown’s husband, and she is still working with an attorney to seek vindication. She believes the justice system should be changed.

Activist Miguel Adams, part of a movement called “End the New Jim Crow,” called police brutality a symptom of a problem that only education will solve. He and his colleagues have started teaching young people about the legal system.

This was the third major demonstration held in Orlando within the past two weeks. Protest organizers say they are planning more actions, as part of a nationwide effort to tackle racial profiling and police brutality.

Protesters gathered in front of the Amway Center and staged a "die-in," where they lay on the ground holding signs of black men who were killed by police.

A crowd gathered outside of Florida A&M University Law Center before marching to the Amway Center in downtown Orlando.

38-year-old Marlon Brown was fatally killed by a police officer who ran him over with a patrol car. Wife, Krystal Brown, daughter, Armani Brown, and son, Marlon Jr. attended the rally.