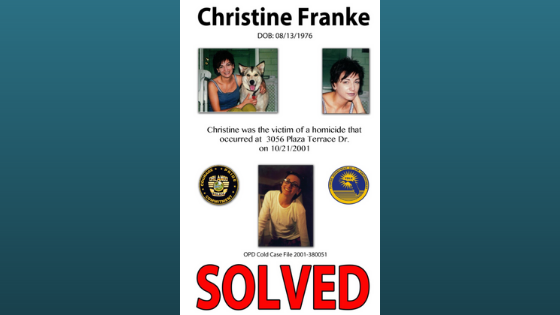 Police have arrested a suspect in connection with a 2001 Orlando murder case. Detectives used DNA evidence uploaded to the internet by the suspect’s relatives.

“We have increased the potential now to identify the individuals who have committed senseless crimes like this,” said Orlando police chief Orlando Rolon. He said the department plans to use the technique on other cold cases.

The suspect in Franke’s case was arrested last week. 38 year old Benjamin Lee Holmes has been charged with first degree murder and robbery. Three relatives uploaded their DNA to the website, which led detectives to the suspect.

Rolon said the Florida Department of Law Enforcement will work with other agencies in the state. “This is an evolving technology that obviously has been proven to work. FDLE is going to spearhead this process to put it on steroids moving forward.”

He said there is a cost involved and hopes the FDLE will help other departments across the state pay for the technology.