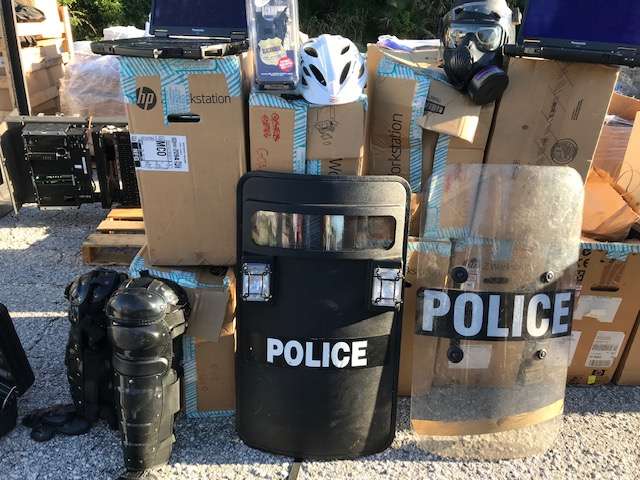 The equipment will be shipped to eight municipalities on the Western part of the island. Photo: Danielle Prieur

Dozens of pallets wrapped with plastic were loaded intro trucks to be shipped to Puerto Rico today.

The giant satellite dishes and the boxes full of helmets and shields will help officers respond to emergencies on the island.

Chief Orlando Rolon says he put out a statewide call for these supplies after he visited the island with ten other officers after Hurricane Maria.

He says the team stayed in San Juan where they witnessed destruction from the storm. But he says most of the gear will be sent to eight municipalities on the island’s Western side.

“The Western side of the island was ignored. Because the main metropolitan areas were receiving all the attention so we feel this is one opportunity to take care of the West part.”

Rolon says one of the most needed items they’re sending is a new radio analog system. He says this will help officers communicate with each other and the people they’re trying to serve.

Orlando Mayor Buddy Dyer says the more than $800,000 dollars worth of gear was donated by local police departments throughout the state.

“We know what it’s like to receive help after hurricanes or tragedies like Pulse from around the state and around the world. So it just pleases me to extend that same kind of help to others in need.”

The equipment should arrive in Puerto Rico in May. More than 13,000 officers will use the new supplies to respond to emergencies.