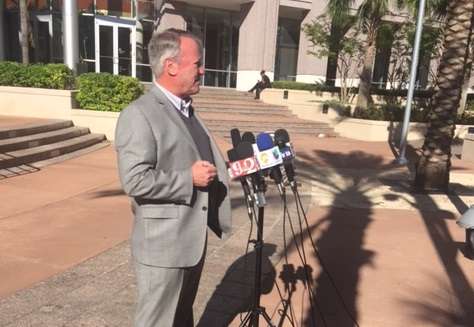 At a press conference outside City Hall, Mayor Buddy Dyer said he will run again in 2019./Photo: Catherine Welch WMFE

Orlando Mayor Buddy Dyer says while he has expressed interest in leading the University of Central Florida, he plans instead to run for re-election in 2019.

He talked with university board members during the last three to four years, said Dyer, and was surprised when UCF President John Hitt announced his retirement last week.

During that announcement, Hitt said now is not the time for a political replacement.

“That’s old school, and that’s the model Dr. Hitt came out of,”said Dyer. “So I would anticipate that he would think that. However about a third of the colleges and universities in the country now have non-traditional candidates.”

After 25 years at the helm, Hitt will become President Emeritus on July 1st 2018.

For at least a year Hitt will consult on major donations, strategic planning, make appearances, and help with partnerships.

Most of his work will be done from his home in Wisconsin.