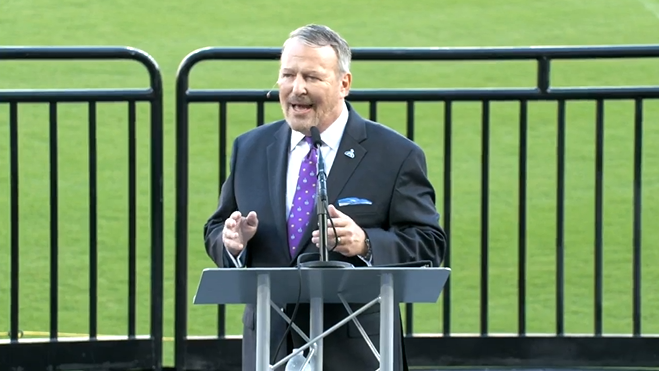 Orlando Mayor, Democrat Buddy Dyer, says the city could receive federal dollars next year to help build the Under-i Project. The project is an urban community park that will be built under the new I-4 Ultimate.

Mayor Buddy Dyer says the Under-i Project could be partially funded through the Bipartisan Infrastructure Deal.

Dyer says some of the $1 trillion dollar package signed into law in November will help connect communities that were formally separated by transportation infrastructure.

And he says that’s exactly what the new urban park featuring gathering places, vendors and performance spaces seeks to do along Church and Washington streets.

“For so long, I-4 has divided the east part of our town, from the west part, Parramore and the downtown.”

Dyer says the I-4 Ultimate Project will be completed by the end of 2021, with construction slated to begin on the Under-i Project in 2023.

But the mayor didn’t stop there.

He also had an exciting announcement about autonomous shuttles coming to downtown Orlando. Dyer says those shuttles will help improve connectivity between different entertainment venues.

“Beep is headquartered here with autonomous vehicles. I’ll let you in on a little secret. We’re trying to establish a Beep route in downtown Orlando. So having some autonomous vehicles in our downtown. We want to be able to embrace the technology.”

Beep, a local Lake Nona company, already has shuttles that travel on fixed routes in that neighborhood of Orlando and has even expanded into Yellowstone National Park.