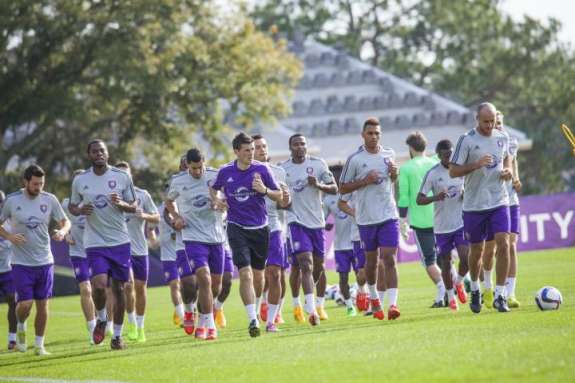 The new expansion team has been training in Sanford this week for its first away game of the season. Photo: Orlando City Soccer Club.

The Orlando City Soccer Club will play its first away game of the season tonight in Texas. The new expansion team will face off against the Houston Dynamo, an older club with a strong record.

Orlando City coach Mark Watson says his players have had a short week to train for the match after they played their inaugural game on Sunday.

“We know Houston well,” Watson says. “They’ve had a pretty set group of players for a few years, so we know how they play. We played them our last pre-season game in Charleston, so we’ve got some recent familiarity with them and we know it’ll be a tough game.”

The Orlando Lions lost to the Houston Dynamo in a pre-season game last month.

Watson has been working with the players on new techniques to claim victory.

Brazilian midfielder Kaká says there’s pressure to win, but he’s blocking that out.

“Now, we have to focus on everything that we’ve been doing during the week and try to win the game, so the first win will arrive. It will come naturally,” he says.

After tonight’s match in Houston, Orlando City Soccer Club will head back home to take on the Vancouver Whitecaps next Saturday.