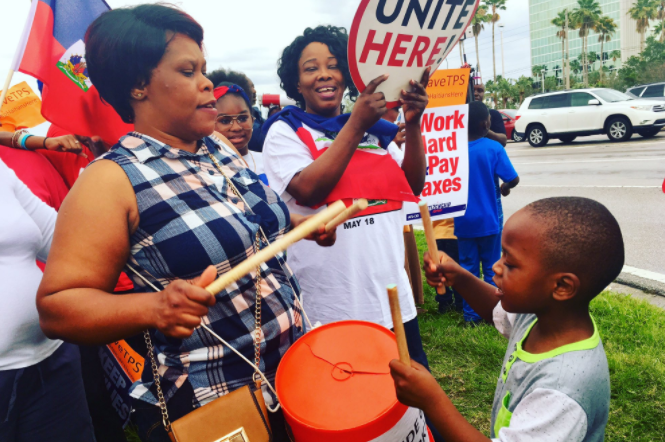 Supporters of the TPS program in front of Universal Studios. Photo: Monivette Cordeiro

As they stood in front of Universal Studios in Orlando, the local Haitian community chanted one message for President Donald Trump: “Keep your promise.”

Department of Homeland Security Secretary John Kelly decided to extend for six more months the temporary protected immigration status given to more than 58,000 Haitian refugees. The program protects Haitians from deportation after the devastating 2010 earthquake in the Caribbean country, which killed hundreds of thousands of people and left more than a million people homeless.

But in his statements this week, Kelly also signaled the end of the program, saying the six-month extension allows Haitian TPS recipients to obtain travel documents and make arrangements for their ultimate departure.

In Orlando, Haitian hospitality and theme park workers who make up the backbone of the region’s tourism industry say the decision by the Trump administration leaves them living in fear of deportation. Florida’s Haitian community, which is the largest among the states, still remembers when candidate Trump stopped in Miami’s Little Haiti neighborhood last year and said he wanted to be their “greatest champion.”

Some, like local hotel worker Franz Jean, say they want Trump to extend the TPS program for a longer term. Jean works to send money for his family who is struggling to survive, like many other families on the island who haven’t recovered from the earthquake or Hurricane Matthew. If he and other Haitians are sent back, he says it would a “slap in the face” by the president to a community he promised to help.