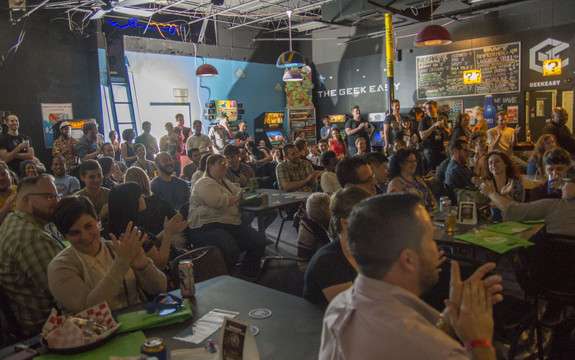 A funny thing’s happening in Orlando. In the tourist entertainment capital of the world, there are plenty of big-name comics playing to large audiences, and there are comedy open mics every night of the week for beginners. But there hasn’t been much of a home-grown stand-up scene – until recently.

Unlike acknowledged comedy hubs like Austin or Chicago, it’s tough here for rising comics to find a place where they can polish their skills. So a few locals have launched a new wave of curated showcases. Matt Gersting books one twice a month at the Bull & Bush. He says, “It’s a huge leap from doing five minutes at an open mic, to 20, in front of people from out of town paying to laugh.” The idea is to give audiences a reliably funny, if not necessarily family-friendly, show, while comics get a space to build up their chops for bigger club dates.

Gersting is also one of the founders of the Orlando Indie Comedy Fest: www.orlandoindiecomedy.com. This year’s fest, October 1st through 4th, will spotlight more than 50 comedians from across the country. Fellow Indie Comedy Fest organizer Nick Pupo says, “Touring comics remember which cities are fun and treat them well. And I’m hearing from other comedians that Orlando is becoming known as a comedy culture that takes care of comics.”