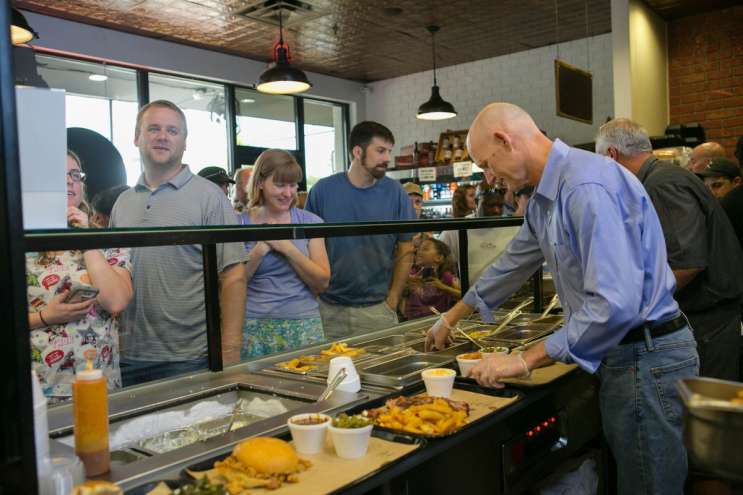 Business is buzzing at Atomic tattoos in Conway – quite literally. Tattoo guns furiously buzz as two artists work on clients and many more are waiting in line.

The chain of tattoo parlors is offering Pulse-themed tattoos that include rainbows, hearts and phrases like ‘pride’ and ‘Orlando Strong.’ Shivana Rameshwar is waiting for hers. “I’m getting a heart with a pulse coming out of the side.”

Atomic is offering the tattoos for $50 with 100-percent of that donated to the victims and families.

Tattoo are permanent, much like the memories of the Pulse shooting, says Rameshwar. “I think it’s something that we’re all going to remember for the rest of our lives, being here in Orlando, so I think it’s important to memorialize it, but also give back.”

Brews for a Cause

Just a few doors down at Ocean Sun Brewing craft-beer drinkers are piling in. The brewery joined the likes of Ten10, Black Caldrin, and Orlando Brewing participating in a pub-crawl.

Proceeds from Ocean Sun’s Bumby Blonde went to help those impacted by the Pulse shooting.

Each of the four breweries are offering one beer and donating the proceeds – and looking across the space you only see one type of glass. Everyone I know,” says Elon Jenkins, “[is] only buying one beer – the beer that goes towards the fund.

Jenkins is making a stop on the pub crawl. He’s not surprised by the turnout – since the shooting, he’s seen the city come together. “This to me, it shows you that it can unify everything from racial, gender, other demographic divisions. It brought the city together.

Just two miles south of Pulse nightclub is Friendly Confines. After hearing of the tragedy and realizing the Pulse staff would be out of work, the Friendly Confines staff decided to donate their tips.

Server April Scher said from open to close Saturday the restaurant was packed. Along with a donation from the owner of the bar , she said they raised over $10,000.

Scher said it wasn’t a tough decision to make. The whole staff jumped in to help. “The [Pulse] employees are out of business right now. We’re a part of the service industry as well. What are they going to do for money in the mean time? They need money as well.”

Another restaurant open its doors to raise funds for the victims and families. 4Rivers Smokehouse is never open on Sundays. But founder and Chef John Rivers broke his barbecue Sabbath to pitch in.

For four hours Sunday a line stretched around the building. Local politicians and volunteers manned the line to serve customers – even Governor Rick Scott stopped by to help out.

“Every single person that has gone through that line has said thank you,” said Chef Rivers. “Not for the food, but just for creating this platform that people can come together and how we’re all in this together. It wasn’t just one group of people that got hurt. It’s a whole city that hurts and mourns with them.”

Rivers expected a big turnout after posting a letter on Facebook earlier in the week – but nothing like this. “If you had asked me yesterday, I had a relatively conservative number and an aggressive number – and we’re going to blow that number away. Which I love.”

Two major charities have sprung up in the wake of the tragedy – a GoFundMe to raise money for victims and a city-wide charity called One Orlando. Together, the two have raised more than $12 million.