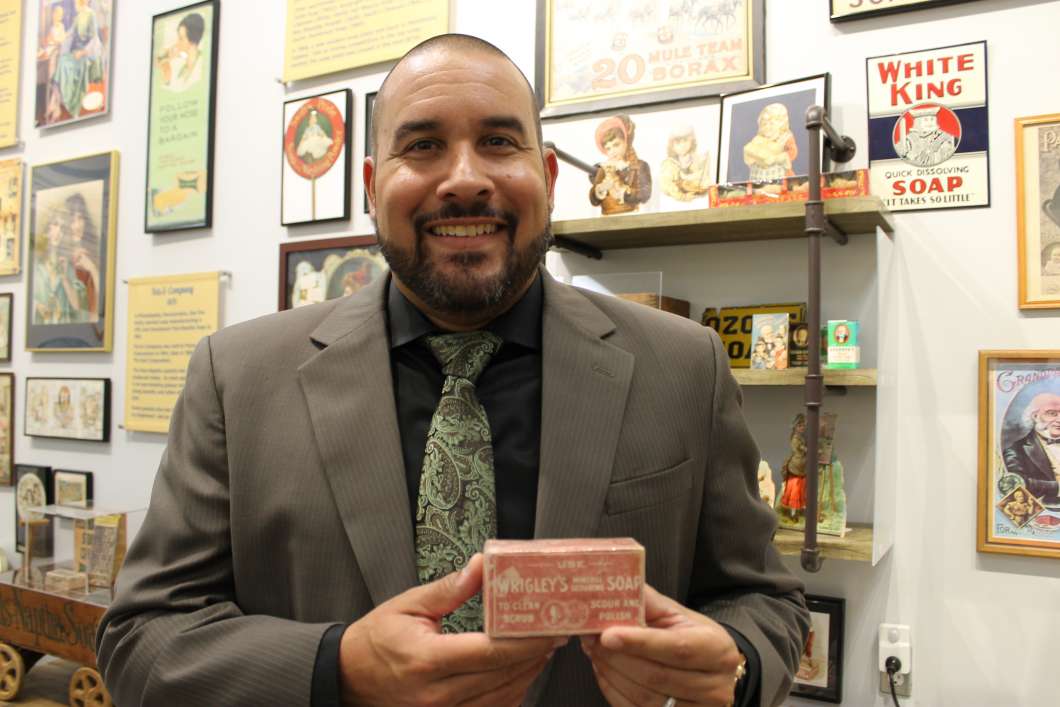 Shawn Seipler holds an antique bar of soap from the Soap Story exhibit at Clean The World.

Since it was founded in 2009, the Orlando-based nonprofit Clean the World has distributed about 48 million bars of soap to over 127 countries. The organization recycles discarded soap from 5,000 hotels to send to communities without access to bar soap and hygiene education.

Clean the World’s local headquarters now features its very own interactive soap museum called The Soap Story, which is said to be the first of its kind. The museum includes soap pieces from the collection of Luis and Fortuna Spitz and tells the story of soap from its origins to now.

The museum’s grand opening ceremony took place in April 2018 at the organization’s headquarters.

Founder Shawn Seipler said while Luis Fortuna was persistent upon first offering his personal soap collection to Clean the World, it wasn’t until months later that the idea for the museum was formed.

“When we started researching and saw the work that he did [and] the books that he had which displayed his collection, it was immediate like, ‘Wow, this is really incredible and important for Clean the World,’ but it was months after when we really understood that we would be able to take this collection and display it.”

The museum features bars of soap, drawings, advertisements and other soap-related memorabilia dating back centuries. It provides both entertainment and education for visitors.

Luis Fortuna said his interest in soaps began decades ago when be became employed as a chemical engineer for the makers of Dial soap.

“There’s a marvelous history about soaps and the importance of what it has done for mankind, specifically for health, handwashing — a big area the Clean the World is involved —and then beauty,” Fortuna said.

Seipler said the interactive experience plays into Clean the World’s larger goal as a global health organization trying to prevent deaths caused by lack of hygiene.

“The historical reference of soap and about it being a ‘Soap Saves Lives’ concept is exactly what Clean the World is all about,” Seipler said. “That’s what we’re doing in so many communities across the globe.”

The Soap Story Museum is now open to visitors Monday through Friday from 8 a.m. to 5 p.m.. Click here for more information.

This interview first aired on Intersection in April 2018.