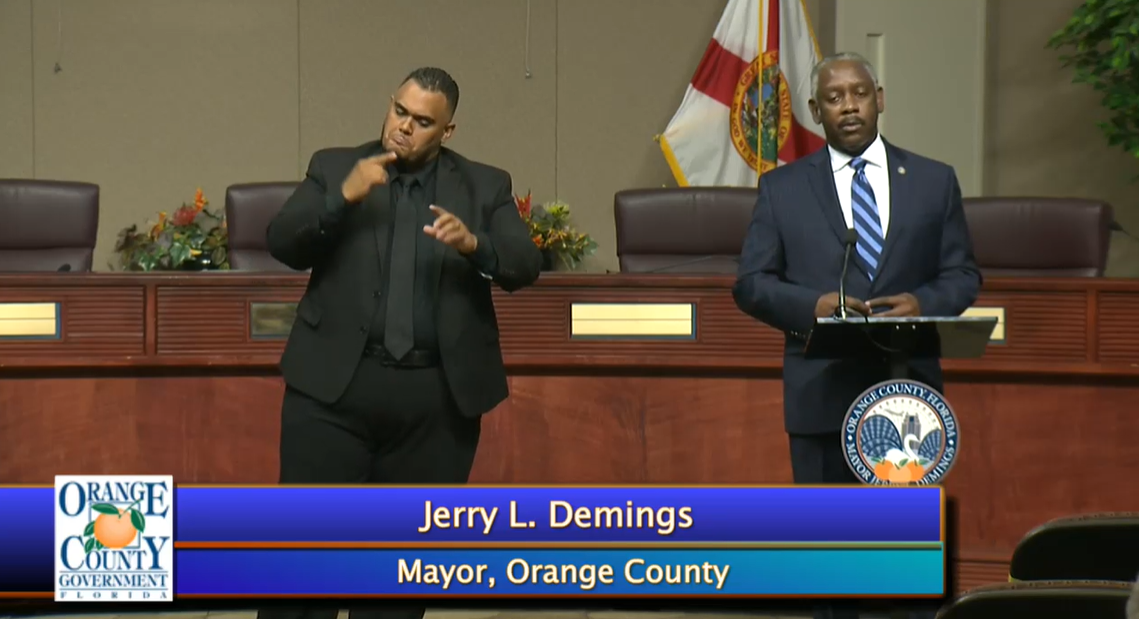 Orange County mayor Jerry Demings says the county will send so-called strike teams to businesses that aren’t complying with the mask order and other measures to limit the spread of coronavirus. Demings said he wants to focus on  ‘bad actors’.

The strike teams will include members of the county’s code enforcement team and representatives from the health department.

Demings said it’s unlikely that a business would be shut down on the spot.

“The purpose is to gain compliance so I suspect that much of what initially may occur would be warnings, you know, we come in and we see you in violation and give you a warning, we’re going to document that we warn you before we take further punitive action.”

Demings said a working group will decide on potential penalties next week.

The death toll in Orange County has reached 102, as of Thursday.

“We are now at 102 deaths in Orange County, that means that 102 different families have been directly impacted the worst when they’ve had the loss of a family member,” said Demings.

Demings appealed to Orange County residents who have recovered from coronavirus to donate plasma.

The thought is that antibodies in the plasma could help people who are sick fight the disease.

“OneBlood tells us that there is a 500% increase in hospital orders for the COVID-19 convalescent plasma,” said Demings.

“Donors must provide documented lab tests or a letter from the hospital affirming they had COVID-19, or provided positive results from an antibody test.”

People who want to donate can find details of how to do so at the OneBlood website.

More than 30,000 applications for financial relief

Demings said some 30,180 families, individuals or households have applied for the county’s crisis assistance funds.

He said about $9.5 million in CARES Act funds has been processed by the comptrollers office.

More than $25 million has been processed for small businesses who applied for $10,000 grants.

The Florida Department of Health in Orange County will hire about 100 extra staff to help with contact tracing to get coronavirus under control.

Health officer Dr. Raul Pino said he’s received about $5 million in state and county funding to hire the new staff. He said the new hires will include nurses and LPNs.

“The nurses and the LPNs will be involved in testing and future vaccination that may happen if we get a vaccine,”said Pino.

“The tracers will engage in calling the community, calling people who have been positive and advising them what to do and determining who may have been exposed to the disease.”

They will replace the 40 contractors who have been doing the contact tracing work so far.

Delay in processing test results is contributing to the spread

Pino said the average time from test to result was seven days.

“When you get results that are a week later, there’s little you can do,” he said.

“So that’s probably part of why the transmission is going so crazy, especially for people who are asymptomatic, and they don’t feel sick.”

Pino said if people don’t think they are sick they are unlikely to refrain from social activities.

Pino said he is trying to acquire rapid testing machines to speed up the process.

An executive order from the commissioner of education calls for schools to reopen brick and mortar campuses for students five days a week.

Pino said he doesn’t believe he has the authority to advise the school district whether to reopen campuses or not.

“I know there is a level of anxiety out in the community,” said Pino.

“I have received probably 500 emails: some of them are not of the best behavior, and those have been reported to the specific authorities that have to deal with this level of threats.But again, I will make the decision that I need to make, if I have the authority to make that decision.”

The Orange County School board meets Friday to decide on a plan for reopening.