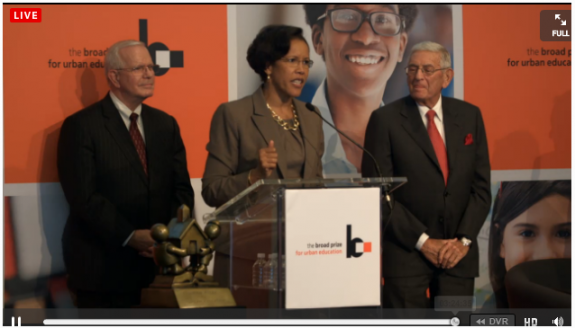 Orange County Public Schools has won $500,000 in scholarship money for its senior students.

The Eli and Edyth Broad foundation Prize recognizes large urban school districts that have worked to reduce achievement gaps among low-income students and students of color.

This year the million dollar prize money was split between Orange County, and Gwinnett County Public Schools in Georgia.

“I want to encourage our colleagues across the nation that do such critical work, that we’re all committed to, that we will attempt to accelerate our efforts at narrowing those achievement gaps,” said Jenkins.

Presenting the award was education secretary Arne Duncan, who singled out Orange County’s middle school reading achievements as one of the marks of success.

“Between just 2011 and 2013, low income students performing at the highest achievement levels increased by six percentage points in middle school reading, compared to just one point for the rest of the state.”

Duncan said during that time, Orange County also increased the percentage of Hispanic junior and senior students taking AP exams by 7 per cent.

This year the review board that awards the prize picked only two school districts as finalists instead of the usual five.

The board said that’s because it was disappointed with the overall progress of urban school systems in America.