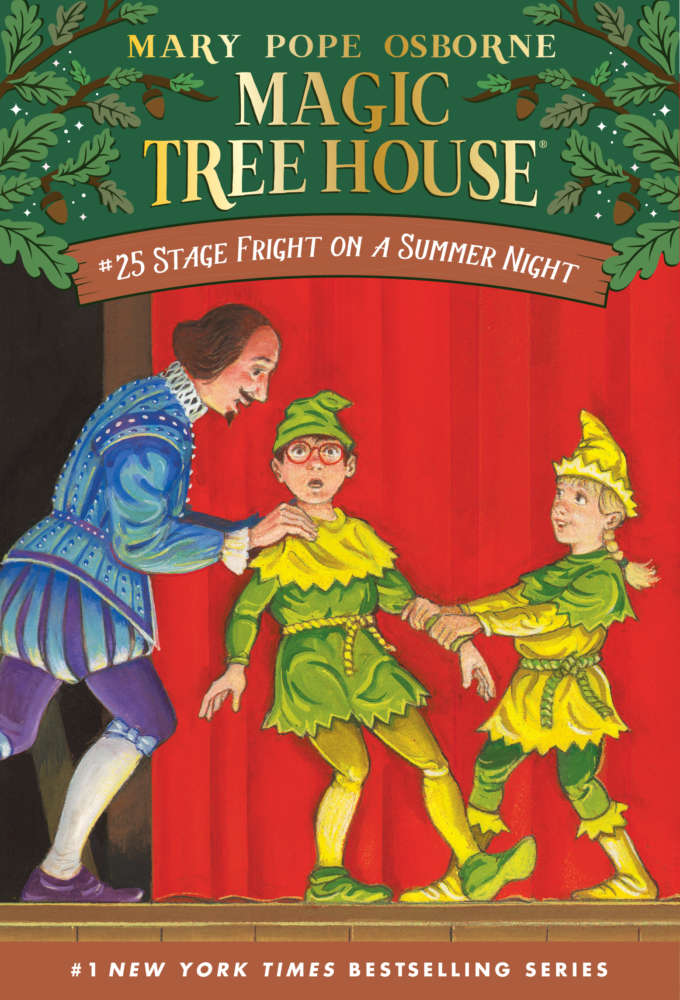 Orange County Public Schools fourth graders will be learning about William Shakespeare with a little help from the Magic Tree House book series.

Each student will receive a copy of Showtime With Shakespeare: A Magic Tree House Adventure and will participate in an online module about the bard based on The Orlando Shakespeare Theater production of the book.

WMFE spoke with author Mary Pope Osborne, her husband and actor Will Osborne who adapted the book to stage and Brandon Yagel of Orlando Shakes about the project.

I am thrilled that students will see our original MTH musical, Showtime with Shakespeare virtually. Reading the book on which the show is based will allow them to make meaningful connections between literacy and the arts. @OrlandoShakes #kidlit #artsed https://t.co/mGdHejF5yR

Danielle: Will, what is Showtime With Shakespeare: A Magic Tree House Adventure about and tell us a little bit about how you adapted it to the stage.

Will: Sure. Well, it’s based very closely on Stage Fright On A Summer Night in which Jack and Annie go back to the Globe Theatre and meet William Shakespeare who, as luck would have it has just lost an actor or two. And so they have to fill in in a production of A Midsummer Night’s Dream that is later attended by Queen Elizabeth.

In terms of adapting it, I worked with a wonderful composer and cowriter. Randy Courts is the composer and Jenny Laird is my cowriter and it was Randy’s idea to do it as a hip-hop musical.

There’s so much in Shakespeare, that’s rhymed couplets. And the manipulation of language throughout all of Shakespeare’s plays is just delicious. And that’s a big factor and you know, hip-hop, and slam poetry and that sort of thing. So I thought it was a fantastic idea. And so we set out together to write the lyrics. And then Randy set them all to a groove and the hip-hop beat. And there are a few ballads in it. A few things that aren’t strictly hip-hop that are more musical theater. But the idea was to bring Shakespeare into the 21st century, with a sound and a feel and a look that kids today are familiar with and would really get off on.

Mary: Well, I think when you’re small, and you hear a name, and you get involved in an experience with that name, then forever after you feel like you own it, and of course, they can’t jump into reading Shakespeare plays, but they will know who Shakespeare is. A great playwright, from, you know, the 1600s. And I feel like that will connect them to history, and to one of our world’s great writers. So I think Shakespeare should be for everyone, but it’s more preparation for them finding out more about him when they’re older.

Will: One of the great stories that I love from the Orlando production is that we were told that a kid was riding home with their parents after seeing the show, which is based on A Midsummer Night’s Dream, and turned to him and said, ‘You know, I, I think I’d like to see that midsummer donkey play sometime.’

Mary: Yeah, we want them to want to know some day more about Shakespeare. Yeah. And to feel that performing is something they could do themselves.

Will: Exactly. That’s the other big message of the show.

Danielle: Brandon, tell me a little bit about how parents and families can get involved in teaching kids about theater and getting them engaged while they’re at home right now.

Brandon: You know, we’re in such a fortunate time because there’s so much. Certainly we have this experience where they can watch Showtime With Shakespeare. And that workshop that they’re doing does help them start to do theater.

But you could almost do that with any piece of theater that you can watch online and you can almost see anything these days, through the various streaming services. And especially when the pandemic first started, you know, there was a lot of action on social media and things like that, of people kind of recreating and doing scenes in their home, you know, with bedsheets, and, you know, whatever they may have in their house and I think that’s what’s really cool about theater is it’s still able to be done and it adapts to whatever the time requires.