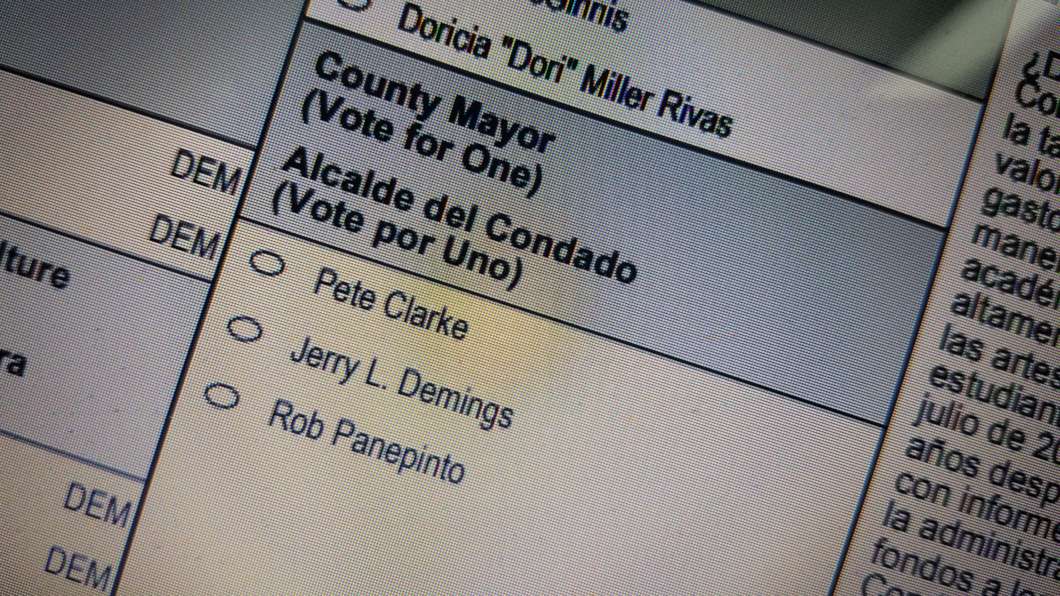 The primary election is just about a week away while early voting is ongoing in Orange County. On the ballot, three candidates for Orange County Mayor. The current Mayor, Teresa Jacobs, is stepping down due to term limits. The three candidates vying for the post were at a recent forum on sustainability.

Danielle Prier: 90.7’s Brendan Byrne was at the forum, and he’s here now in the studio to bring us up to speed on this race. Brendan, first, tell us about the candidates.

Brendan Byrne: The race is down to three candidates. Orange County Sheriff Jerry Demings, Orange County Commissioner Pete Clark and businessman Rob Panepinto. All three were at a candidate forum hosted by Credo Conduit, a co-working space in Orlando. The candidates were sent ten identical questions relating to sustainability and wrote responses. They were then asked to elaborate on some of those questions at the forum last week.

Danielle Prier: Sustainability covers a broad range of topics from development, to the environment, to transportation. So what were some of the issues discussed at the forum?

Brendan Byrne: Sheriff Demings was asked about how he would balance the growth of Orange County while providing safe food, clean water and sufficient energy to the growing population. Here’s what he had to say:

Sheriff Jerry Demings: “One of the first things that I would do is create an office of sustainability and resiliency so that we can put a focus on this particular area. In the recent past, Orange County did not have a specific manager that was responsible for this particular area, and I want to broaden that by making it a part of the top priorities I have as Mayor.”

Danielle Prier: With growth comes development, was that a topic of discussion?

Brendan Byrne: Yes, so answering the same question about balancing that development and sustainability, Commissioner Clark had this to say:

Commissioner Pete Clark: “We’re going to take a long, hard look at how we protect our wetlands, how we protect our recharge areas, and also how we protect lands that I had a part in purchasing back in Preservation 2000, which split oak forest is one of them. That came out of our officer. Somebody wants to build and expressway through Split Oak Forest and I find that offensive.”

Brendan Byrne: Candidate Rob Panepinto thinks the most important aspect of creating a sustainable county is looking at the economic aspects of development. Here’s what he had to say:

Rob Panepinto: “The economic development piece is important to me because you can tie a lot of sustainability, and positive sustainability, to how you grow economically. For example, out in west Orange County, if we had more jobs and more economic development say in Horizons West, you would solve a mobility issue – a lot of rooftops out there, not a whole lot of jobs. Create more jobs out there, less people on the highway driving back in causing congestion, traffic and pollution.”

Brendan Byrne: Sheriff Demings talked about the County’s recycling program. Right now, Orange County is paying to have its recyclables processed. He says he wants to incentivize recycling and have companies bid for the contract. Commissioner Clark pressed the issue of mass transportation and funding SunRail with toll dollars to help alleviate environmental issues caused by traffic. And Rob Panepinto says there’s a need to focus on affordable housing in the County.

Danielle Prier: Where can Orange County residents learn more about the candidates’ stances on sustainability?

Brendan Byrne: The Florida Green Chamber of Commerce posted the candidates’ responses on its Facebook page.  As you mentioned, early voting in the County is underway, and mail in ballots have already been sent out. Voters can head to the polls on primary election day for this race on August 28th.