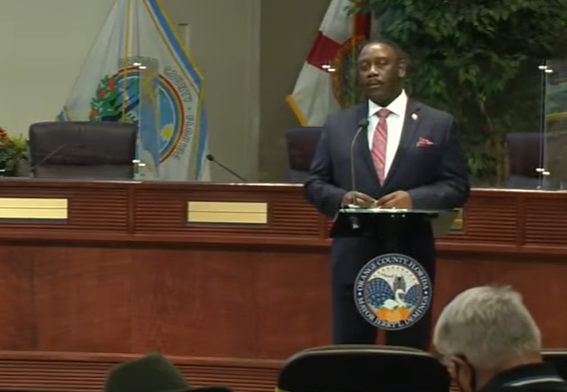 Demings said about 55% of all county employees are vaccinated. Employees now have until September 30th to get the first dose of a vaccine and until October 31st to complete the series.

“The goal was not to be punitive in the first place but to get an increase in the number of employees who are getting vaccinated, and sometimes we have to mandate things to get the kind of outcomes that we want to have,” he said.

“I have other employees who are also hospitalized in critical care units, and in some cases, the prognosis for them is not good either. So, I’m not here to be timid in my leadership role as the crisis manager during this emergency. I’m here to make decisions that save lives.”

Demings said four county employees have died of COVID-19, including one who died this week.

Orange County’s 14-day rolling positivity rate has dipped a bit according to the Florida Department of Health in Orange County.

Health Officer Dr. Raul Pino said the positivity rate is now 19.2%. It had been higher than 20%.

The announcement was a sliver of hope, even as the county-wide death toll continues to rise. Some 1,499 people have now died of COVID-19 in Orange County, with 19 new deaths reported since Monday.

“Five of the 19 were fully vaccinated. And those were over 70 years of age. And all of them had underlying conditions,” said Pino.

Dr. Pino said vaccinations are never 100% effective, adding that more than 95% of the people who have died since the rollout of the vaccines have been unvaccinated.

Mayor Jerry Demings said the county will see what help it can offer to hospitals and crematoriums whose morgues are full because of the surge in COVID-19 deaths.

He said the county’s emergency management division was notified that some crematoriums and hospital morgues are at capacity.

“It may require a request to the state for additional refrigeration portable units to be deployed. We’re just doing an assessment, at this point to determine how critical that is, And so we don’t have a final answer today but we’re working through.”

WFTV Channel 9 on Thursday reported that morgues in AdventHealth’s Central Florida  division are at capacity, and the hospital system is using rented, refrigerated coolers.

In a statement provided to WMFE, an AdventHealth spokesperson said “with the spike of seriously ill patients in our hospitals, it’s prudent that we prepare for an increase in deaths and are putting resources in place to provide additional capacity if needed.”

Listen to an in depth conversation about how the state responds to mass casualty events and how state resources could be deployed to help cope with the surge in COVID-19 fatalities.