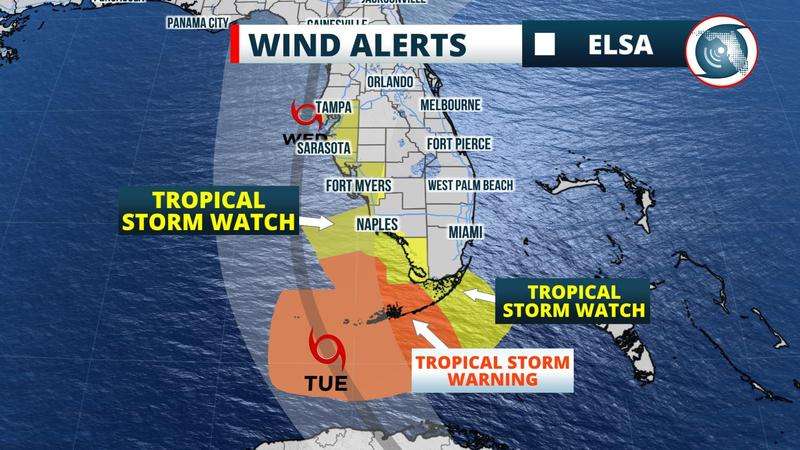 (Updated at 7 p.m.) The Orange County Emergency Operations Center is monitoring Tropical Storm Elsa and has its shelters and other resources on standby.

“The actual forecast amount for Orange County, we’re looking at possibly 40 mph sustained winds on Tuesday up until Wednesday, possible at this time,” he said. “There may be wind gusts up to 60 mph.”

He urges residents to stay vigilant and follow storm updates and alerts.

Durden says you should also double-check your hurricane kit, check your batteries and make sure your vehicles are fueled up.

If anything is needed for preparedness, he says now is the time to take care of it.

(Updated at 6:50 p.m.) Lake County will provide up to 10 sandbags per household at five locations from 8 a.m. to 5 p.m. Monday in preparation for Tropical Storm Elsa.

The locations are: Fire Station 10 in Astor, the East Lake sports complex in Sorrento, PEAR Park in Leesburg, North Lake Regional Park in Umatilla and the Minneola Athletic Complex.

Residents will need to bring their own shovels and fill the bags themselves.

(Updated at 5:30 p.m.) A Tropical Storm Watch has been extended northward and includes much of the Florida west coast to the Anclote River.

The Fort Myers, Sarasota, and Tampa areas are included Tropical Storm Watch. In addition, a Storm Surge Watch has been issued from Bonita Beach northward to the Suwannee River, including Tampa Bay.

Water levels may rise to between 1 and 3 feet above normally dry ground in places from the middle and lower Keys and northward to Bonita Beach.

Water levels may increase to 2 to 4 feet above dry ground on Tuesday from Bonita Beach northward to the mouth of the Suwannee River, including Tampa Bay.

Tropical Storm Watches and Warning Expanded Northward Ahead Of Elsa

The storm’s motion in excess of 30 mph early Saturday morning had slowed down to a little more than 10 mph Sunday morning. Tropical cyclones, on average, move between 10 and 15 mph, so Elsa is now moving at a pace that is more common.

Tropical Storm Warnings continued over Jamaica and a large portion of Cuba, where tropical storm conditions are expected to continue on occasion through Monday. Flash flooding and mudslides are possible on the mountainous islands and on Haiti, where 4 to 8 inches of rain is expected. Isolated areas were expected to receive as much as 15 inches.

The storm itself has become disorganized in the face of strong wind shear and its close pass to Haiti on Saturday. Its interaction with Cuba Sunday night and Monday is likely to cause additional weakening before it emerges over the Florida Straits Monday night.

A small amount of re-strengthening is possible in the Gulf of Mexico, but strong wind shear is expected to keep the heaviest rain and winds east of the circulation center and most likely prevent Elsa from regaining hurricane strength.

The first rain bands from Elsa over the Florida Keys are expected Monday afternoon, where Tropical Storm Watches remain in effect. Tropical storm force winds are likely, particularly over the lower and middle Keys late Monday afternoon into Monday night. The slower storm motion means any tropical storm force winds over South Florida would hold off until overnight Monday or at first light on Tuesday, favoring the Gulf side.

Tropical storm conditions are possible as far north as Tampa and Orlando Tuesday evening, and then from the Nature Coast into North-Central and Northeast Florida overnight Tuesday into Wednesday.

If tropical storm winds were to occur, they would be more likely on the Gulf of Mexico side of the peninsula Tuesday night, but would then shift to Florida’s First Coast on Wednesday as the storm turns more toward the northeast.

Heavy rainfall is likely to be the greatest impact from Elsa. Widespread rainfall of 2 to 5 inches are forecast directly from Elsa, which may result in areas of urban flash flooding and minor river flooding over the Florida Peninsula early this week.

A separate front has been producing heavy rainfall over the holiday weekend, particularly from the Tampa/St. Petersburg areas northward to Orlando, Gainesville, and Jacksonville metro areas. These areas have had almost twice their average rainfall since the beginning of June and additional rain from Elsa would increase the possibility of flooding, especially in these areas.

Conditions are likely to improve by Wednesday evening as Elsa begins to move toward the eastern Carolinas.

(Updated at 9 a.m.) Elsa’s forward motion has slowed to 13 mph — in contrast to nearly 30 mph on Saturday morning — as it passes between Jamaica and Cuba Sunday morning.

Top sustained winds are near 65 mph.

There have been few changes to the forecast track, which takes Elsa over Cuba Sunday night and Monday and into the Gulf of Mexico Monday evening.

These winds may arrive in areas like Sarasota during the daylight hours of Tuesday morning, and then reach the I-4 corridor from Tampa to Orlando Tuesday evening. The highest probability of tropical storm force conditions is near the Gulf coastline, with lower probabilities farther inland toward the Orlando metropolitan area.

On its current track, tropical storm conditions could make it as far north as the Nature Coast and toward Gainesville, Jacksonville, and St. Augustine overnight Tuesday into Wednesday morning.

The storm’s exact path and intensity will determine whether these areas receive tropical storm conditions, and that remains uncertain at this time.

Tropical Storm Elsa has slowed down near Jamaica, but forecasters still expect it to travel over or near Southwest Florida on Tuesday and Wednesday.

At 5 a.m., the National Hurricane Center reported maximum wind speeds of around 63 mph. The storm is not expected to become a hurricane again before making landfall somewhere between Naples and coast south of Tallahassee.

It is likely to cross the state on Wednesday and head northeast into Georgia.

The hurricane center says there is a risk of tropical storm conditions, storm surge and heavy rain along the Florida Peninsula Monday night
through Wednesday.

The government opened shelters and moved to protect sugarcane and cocoa crops ahead of the storm, whose next target was Florida, where Gov. Ron DeSantis declared a state of emergency in 15 counties, including in Miami-Dade County where the high-rise condominium building collapsed last week.

Elsa was located about 175 miles east-southeast of Montego Bay, Jamaica, and was speeding west-northwest at 17 mph. It had maximum sustained winds of 65 mph.