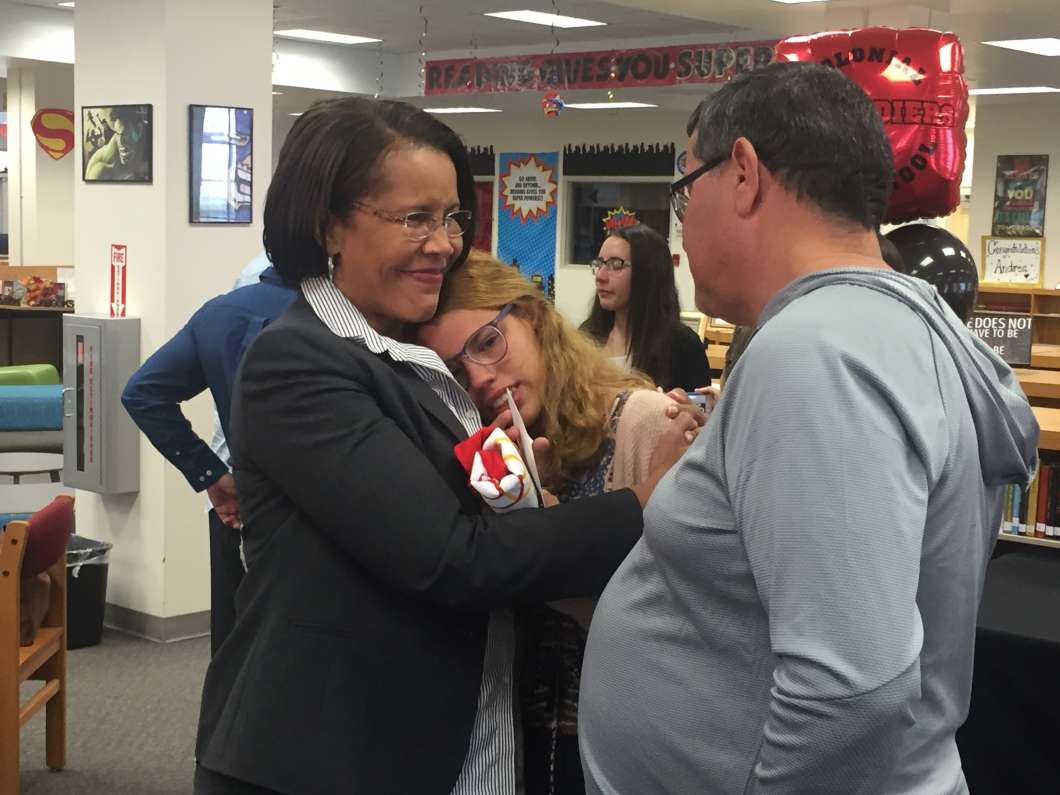 Photo and caption courtesy OCPS. Dr. Barbara Jenkins hugs Zuleika Avela, 17, a senior at Colonial High. Zuleika moved to Orlando after Hurricane Maria devastated her home in Puerto Rico. She already had college plans and wasn’t sure what she would do after Maria. Valencia College and UCF stepped up to offer her full scholarships. They were presented in a ceremony on November 2nd.

Orange County Schools is taking in the most students and teachers fleeing from Puerto Rico following Hurricane Maria. These new arrivals are trying to get life back to a sense of normalcy following devastation back on the island. As part of reporting from our Education Desk, 90.7’s Crystal Chavez visited Superintendent Barbara Jenkins to see how things are going.

She said the district has enrolled more than 2,100 students since Maria.

Jenkins: That would be a typical entire middle school, a large middle school or a smaller high school, if you had 21 hundred students, none of our elementary schools are quite that large, but a middle school could typically be in the 2,000 range or a very small high school.

Chavez: How many teachers have been hired since Maria?

Jenkins: So that’s really good news, we’re excited about that, we’ve actually hired 42 teachers. An additional 26 classified employees from para professionals like teacher aides, custodians, bus drivers, any of those kinds of positions, we’ve hired an additional 26 so total of 68 of our adults have been hired from the island and then we have an additional 27 that are in the process of being hired.

Chavez: Do their credentials from Puerto Rico transfer and if they don’t, is the district helping with that process?

Jenkins: Yes, most times their credentials can transfer, they have to have some evidence, usually online we can gather evidence that they have a college degree and transcript. The state of Florida, thanks to our commissioner and governor, has actually waived any fees for getting their teacher certification here in Florida and so we’re pleased with that, we get him through the process, we sign a waiver request and we’re able to get them certified if they have evidence of their college degree or their previous certification. If they don’t, quite frankly we can get them into a classroom as a substitute teacher initially as we’re trying to work through those particulars, Crystal.

Chavez: And where are you putting all of these students?

Jenkins: So that’s probably something that we were very proactive and strategic about before we had the initial influx. We thought it would be probably a good idea to at least look around our community, through some technology that we have, to see where we had higher saturations, larger populations of Puerto Rican students currently, because we surmised that the folks who came initially from Puerto Rico would be those who had friends and family to come to. And so when we look at our data, we were pretty good in that projection, in that diagnosis, because where we saw the higher saturations is where a lot of the students and families went initially.

So, we’ve got a large influx out at the Colonial High School area, in that general pod, we got some in the East River area, the Lake Nona area, and then some out in the Apopka area as well, and a few in the inner city areas. So we made good projections, good predictions, based on where we knew we had a current large population. I think as time goes on, Crystal, we will see more and more coming that may not have friends and family to come to.

The county and and FEMA will have to make some provisions for housing for those individuals and we try to be proactive there as well. We’ve said, here are the schools where we have capacity, if at all possible we don’t believe it’s a good idea to try to put them all in a single camp or a trailer park home; we don’t think that’s probably best for our children. We think they ought to be among the community where there’s already capacity in some schools and they go to school with their neighbors and with friends and develop relationships, so we’re hopeful they’ll be more apartment vouchers and things provided for those families as they come in. And we’ve given the county similar data that says, here are schools that already have some seats available if we can help spread that population around to where there’s already capacity.

Chavez: Do you have a sense of the English proficiency of the students?

Jenkins: So that’s hard to project at this point, I wouldn’t want to make any general statements. I will tell you, the wonderful thing about our children coming in is that some are bi literate, meaning they both speak and write in a second language quite well, and then we have some that don’t speak much English at all. The good thing about Orange County public schools is we have a large ELL population, students who come to us that need to learn English, English English language learners. And so our teachers have been going through training, we have bilingual teachers but we also have teachers who are getting better and better prepared to help children regardless of their home language to learn English.

In Orange County, we have students who come from 197 different countries and they speak about 200 different languages and dialects, it’s a very international community. So our teachers have to be equipped on how to help a child who doesn’t speak English make that transition into speaking English and there’s wonderful technology as well, where a student can hold an iPad over a text in a textbook and it converts it to their actual language. I was in a classroom the other day, some we’re converting to Spanish, one young lady was converting to Russian.

Chavez: Will these students take the standardized tests next semester along with everyone else?

Jenkins: That is the expectation at this point. There is no Spanish version provided at this point, we certainly made those requests. The possibility that we can get a Spanish version of the state exams this late is probably minimal. But we’ve also proposed that we could consider for high school students especially, because they have to have that tenth grade language arts passing score, [that] they can use their SAT instead of the state exam. And so, we propose because there is a Spanish version of the SAT that potentially those high schoolers can use those exams if they’ve already had them or perhaps we can provide them a Spanish version similar to the SAT. I don’t want it to seem as though there will be immediate penalties if students come to us and they don’t speak English, then there is a grace period where they wouldn’t be actually penalized in the state of Florida but if I’ve got high school seniors that are ready to graduate we have to have a solution for them pretty quickly.