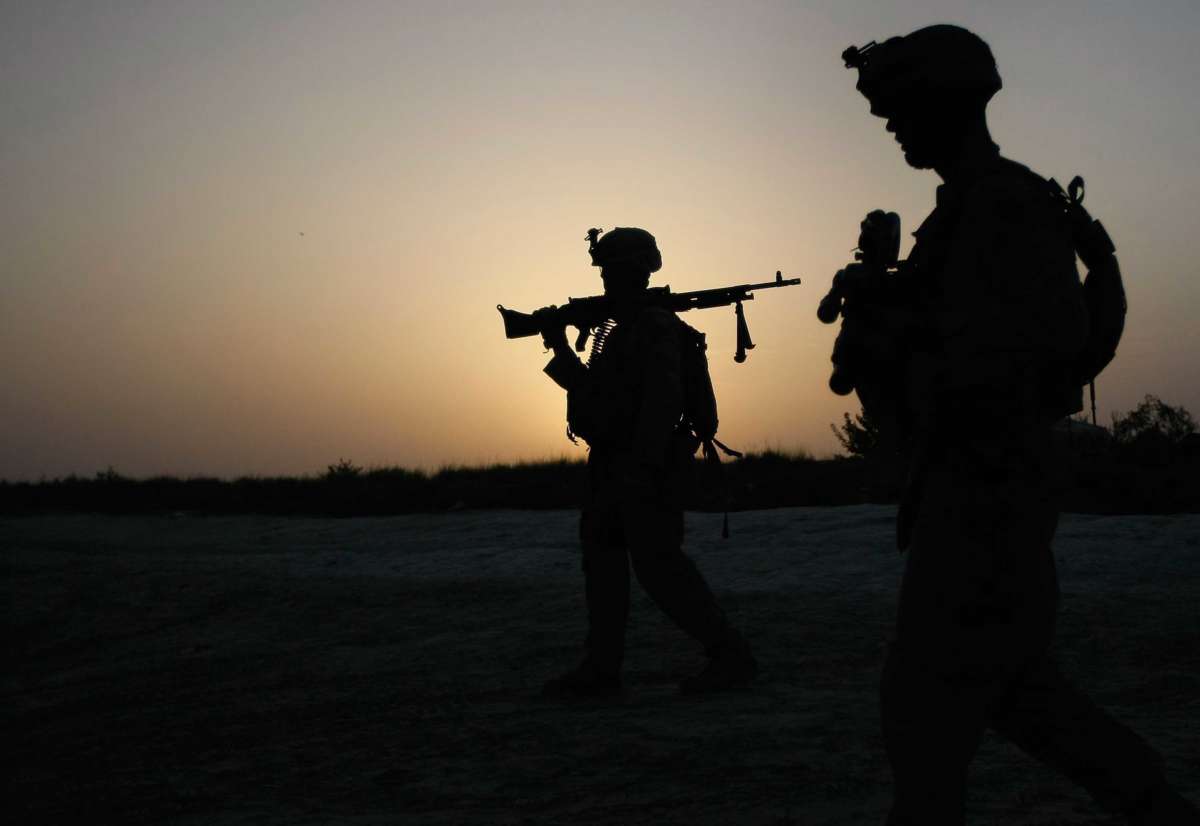 U.S. Marines conduct an operation to clear a village of Taliban fighters on July 5, 2009, in Mian Poshteh, Afghanistan. The U.S. and NATO forces plan to withdraw their remaining troops from Afghanistan by September.
Image credit: Joe Raedle

Colin P. Clarke is the director of policy and research at The Soufan Group and a senior research fellow at The Soufan Center. He is the author of After the Caliphate: The Islamic State and the Future Terrorist Diaspora.

President Biden’s decision to withdraw all troops from Afghanistan no later than Sept. 11 sets in motion an end to the longest war in America’s history. In announcing the withdrawal on Wednesday, Biden declared, “Bin Laden is dead and al-Qaida is degraded in Iraq and Afghanistan.” The president is correct that al-Qaida is degraded, but the transnational terrorist organization has not been defeated.

According to the 2021 Annual Threat Assessment released this week by the Office of the Director of National Intelligence, “ISIS and al-Qa’ida remain the greatest Sunni terrorist threats to US interests overseas; they also seek to conduct attacks inside the United States, although sustained US and allied [counterterrorism] pressure has broadly degraded their capability to do so.”

Policymakers, high-ranking military officials and counterterrorism analysts are concerned that in the absence of a U.S. military presence in Afghanistan, al-Qaida will metastasize and once again pose a direct threat to the U.S. homeland. CIA Director William Burns acknowledged the challenges that a U.S. withdrawal will present to intelligence collection and the ability to act on that intelligence.

There are several difficulties in navigating what amounts to an offshore counterterrorism strategy. The first question is where the U.S. will place its military bases as part of the new strategy. Relying solely on existing U.S. bases in the Persian Gulf would be inadequate in terms of ferrying in quick reaction forces to strike high-value targets. The Pentagon is reportedly discussing several Central Asian countries, including Kazakhstan, Tajikistan and Uzbekistan. But both Russia and China exert significant economic and political influence in the region, and this option would put the U.S. at the mercy of internal politics in countries at risk of instability. The United States was forced to leave the Karshi-Khanabad Air Base in Uzbekistan in 2005 after fallout over Uzbek security forces’ crackdown on protesters that killed between 200 and 700 people, according to the United Nations.

There is speculation about whether Pakistan could be a viable option for U.S. military bases, given historic cooperation between the U.S. intelligence community and its Pakistani counterparts.

The U.S. has relied on bases in Pakistan at various points of the so-called global war on terror, operating a clandestine drone campaign from western Pakistan in an effort to target high-ranking al-Qaida leaders in the northwestern region bordering Afghanistan. Despite being granted access to bases in Pakistan, Islamabad has been a partner in name only. In practice, Pakistan’s elite spy agency, the Inter-Services Intelligence, has long supported the Afghan Taliban and terrorist groups like the Haqqani network. Both of these organizations work closely with al-Qaida.

Pakistan is a notoriously unreliable ally which demands a lot and delivers little, while its military and security services work at cross-purposes to U.S. interests throughout the region. To demonstrate how little faith Washington has in Islamabad, the Obama administration kept the Pakistanis in the dark about the operation targeting Osama bin Laden in May 2011, for fear that someone in the ISI would tip off the world’s most wanted terrorist.

As with Central Asian countries, staging the crux of U.S. counterterrorism operations from Pakistan would make the U.S. hostage to geopolitics. Pakistan’s domestic population has demonstrated a strong anti-American streak. Pakistan and Russia recently announced closer security cooperation around counterterrorism. And Pakistan’s close relationship with China means that Beijing could also have a say in what shape a U.S. presence in Pakistan might take. The perception of a U.S. overreliance on Pakistan might also complicate relations for Washington with Afghan security forces and militias, which would also be crucial to an offshore counterterrorism strategy.

Finally, while Pakistan might be willing to aid the United States in its continued fight against al-Qaida, cooperation would stop short of operations that involve the Taliban. And if the Taliban comes to dominate large swaths of Afghanistan militarily, it will become more difficult to differentiate between the Taliban, al-Qaida and the Haqqani network.

Curiously absent from much of the withdrawal discussion is the fate of the ISIS affiliate in Afghanistan, Islamic State Khorasan Province. The group has been attenuated by ongoing counterterrorism operations by the U.S. and Afghan forces in eastern Afghanistan. But security vacuums resulting from the U.S. withdrawal could offer the group more operational flexibility. In April 2020, a terror cell operating in Germany and seeking to strike U.S. and NATO bases was broken up. The cell was being instructed by an ISIS operative in Afghanistan.

The Biden administration is betting it can handle terrorist threats in Afghanistan the same way the U.S. has dealt with jihadist groups in Somalia, Yemen and Libya. But just because the United States has counterterrorism fatigue does not mean the threat will simply fade away. After all, it was the U.S. withdrawal from Iraq in 2011 that provided the opportunity for the rise of the Islamic State.