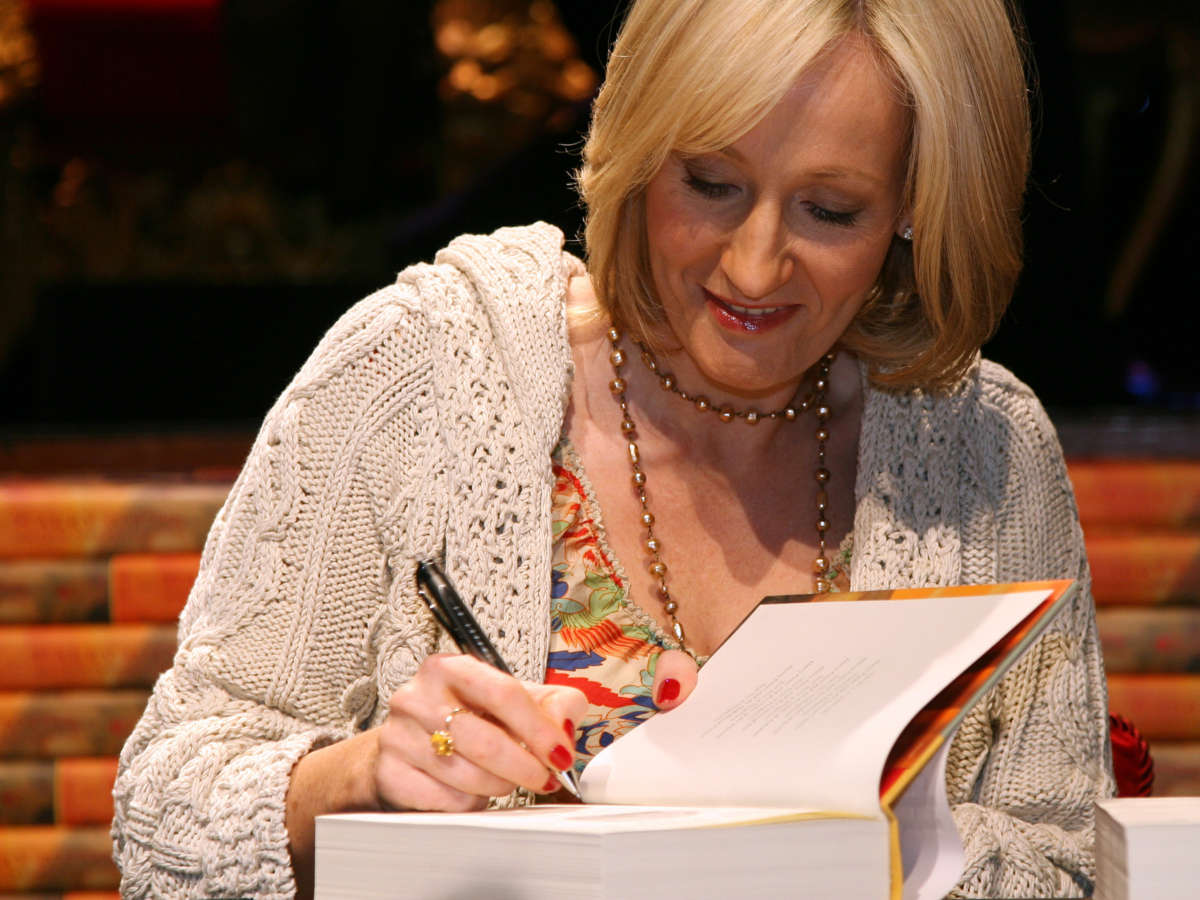 J.K. Rowling signs copies of Harry Potter and the Deathly Hallows in 2007. Many fans say they feel alienated and hurt by her recent comments.
Image credit: Gabriel Bouys

This past weekend, Harry Potter author J.K. Rowling brought a lot of criticism on herself with a series of tweets that many read as transphobic. She seemed to have been set off by an article on access to menstrual hygiene supplies during a global pandemic that referenced “people who menstruate.”

“People who menstruate,” she tweeted alongside a link to the article, “I’m sure there used to be a word for those people. Someone help me out. Wumben? Wimpund? Woomud?”

She followed up a few minutes later: “If sex isn’t real, there’s no same-sex attraction. If sex isn’t real, the lived reality of women globally is erased. I know and love trans people, but erasing the concept of sex removes the ability of many to meaningfully discuss their lives. It isn’t hate to speak the truth.”

Let me get this out of the way: It feels odd for me to be writing this essay right now. Not only are we in the middle of a global pandemic that has killed more than 100,000 people in the United States alone, disproportionately affecting black and brown communities, but black people in the United States — and all over the world — are protesting for basic equality in the face of police brutality after the killing of George Floyd. But here we are.

And here I am, a person who once revered Rowling, a person who is also in the community that she invalidated with a few careless tweets. I’m nonbinary, meaning that my gender identity doesn’t categorize neatly as man or woman. Trans men also don’t fit into the woman category. We are, quite literally, people who menstruate, and it’s more than a little disappointing that the woman who created a wizarding world that meant everything to me doesn’t care to include me or my community.

I’m of the generation that grew up with Harry Potter and his friends. I can chart my adolescence through the series — I was 8 when I read Sorcerer’s Stone, 17 and a fresh high school graduate when Deathly Hallows published. My friends and I dressed up to attend midnight release parties at our local bookstores, midnight premieres at the movie theater. At my loneliest, Hogwarts was my refuge. I identified with Harry’s unease in the Muggle world, identified with the idea of needing to wear Muggle clothes in order to blend in, identified with Harry’s relief at finally finding his people. Maybe the reason I don’t fit in anywhere is that I’m a wizard, I’d think at night. Maybe I just haven’t discovered my magic yet, but when I do, I’ll find my people.

Turns out, there was something I hadn’t discovered back then: My queer self. I was unable or unwilling to examine that queer self, the way Muggles either couldn’t or didn’t want to see Diagon Alley, hidden in plain sight. Once I had the language to describe myself, it was as if a new world revealed itself to me. Discovering the queer community and queer culture felt, to me, a lot like Harry felt walking into Diagon Alley for the first time: A riot of color and noise and wonder. Finally, a place I belonged. Finally, magic.

So you’ll excuse me if it hurts personally, maybe a little too personally, that Rowling so casually mocks language that seeks to include me and other trans people. But I’m not shocked. This isn’t the first time that Rowling has expressed views like this. As recently as December of 2019, she was tweeting support for Maya Forstater, a researcher who lost her job over “offensive and exclusionary” tweets in which she repeatedly misgendered a genderfluid person as “a part-time cross dresser” and stated that “men cannot change into women.”

“Dress however you please,” Rowling tweeted, “but force women out of their jobs for stating that sex is real? #IStandWithMaya” This view, that biological sex — simply the way your body is built — makes you immutably one thing or the other and, therefore, trans women aren’t “real” women, is a basic tenet of trans-exclusionary radical feminists, or TERFs. As trans people and issues have gained more visibility in recent years, so has the backlash.

In the same series of tweets, Rowling wrote, “I respect every trans person’s right to live any way that feels authentic and comfortable to them. I’d march with you if you were discriminated against on the basis of being trans.”

If. This tiny, two-letter word has stuck in my brain. If.

Studies have shown that LGBTQ people face disproportionately high rates of intimate partner and sexual violence; the Human Rights Campaign has tracked at least 12 violent deaths of a transgender or gender nonconforming individual in 2020 alone. In addition, according to the National Center for Transgender Equality, more than 1 in 10 transgender people have been evicted because of their gender identity. The group’s 2015 U.S. Transgender Survey (USTS) found that in the year prior to completing the survey, 30% of respondents who had a job reported being fired or experiencing some other form of discrimination because of their gender identity or expression. Only 20 states and the District of Columbia have laws that prohibit housing discrimination specifically on the basis of both sexual orientation and gender identity; in recent years, bathroom bills that sought to limit access to public restrooms on the basis of sex have been proposed and debated in some states in recent years. And in Rowling’s U.K., British newspapers run editorials warning of the menace of “gender ideology.”

So it’s less a question of if a trans person has been discriminated against, and more a question of how, especially for black trans people. Living the way that feels authentic and comfortable for any trans or gender-nonconforming person has historically been, and continues to be, dangerous.

Making room for trans women or nonbinary people doesn’t crowd women out. My gender identity should have no bearing on another person’s. Rowling is right that saying or examining the ways her “life has been shaped by being female” isn’t hateful on its own. What is hateful and unwelcome, however, is her assertion that “sex is real” and that someone’s gender identity can — and should — be boiled down to their sexual organs. What is hateful is the erasure of trans and nonbinary relationships. What is hateful is the insistence upon acknowledging “the lived reality of women globally” as if it’s a zero-sum game, and all women have the same reality and the same understanding of their womanhood.

Daniel Radcliffe, Harry Potter himself, released a response to Rowling’s tweets through the Trevor Project, an organization that provides crisis intervention and suicide prevention services to LGBTQ youth. In it, he asserts trans women’s womanhood, points to trans-centric educational resources and writes: “To all the people who now feel that their experience of the books has been tarnished or diminished, I am deeply sorry for the pain these comments have caused you. I really hope that you don’t entirely lose what was valuable in these stories to you.”

What I valued in these stories was what a lot of fans valued: The depictions of fierce loyalty among friends, the idea that love is stronger (and more mysterious) than any magic, that strength comes not just from inside yourself but from the people beside you, that evil isn’t limited to genocide but also to prejudice and oppression. Voldemort wasn’t the only villain Harry faced; The Ministry of Magic, which upheld and refused to change a system rooted on prejudice, was an enemy too. I valued the idea that a person isn’t defined by the circumstances of their lives — Lupin isn’t just a werewolf to Harry, and Hagrid isn’t just a half-giant, despite how badly others might perceive them.

I’ll end with one of my favorite exchanges in the series, which takes place in Harry Potter and the Chamber of Secrets. Harry emerges from his second battle with Voldemort worried over the similarities he seems to share with the evil wizard. Professor Dumbledore tells him: “It is our choices, Harry, that show what we truly are, far more than our abilities.” It’s unfortunate what Rowling’s choices have revealed about her.

Mallory Yu is an associate producer for All Things Considered.