Opinion: Britney Is The Latest Victim Of The Industry Machine 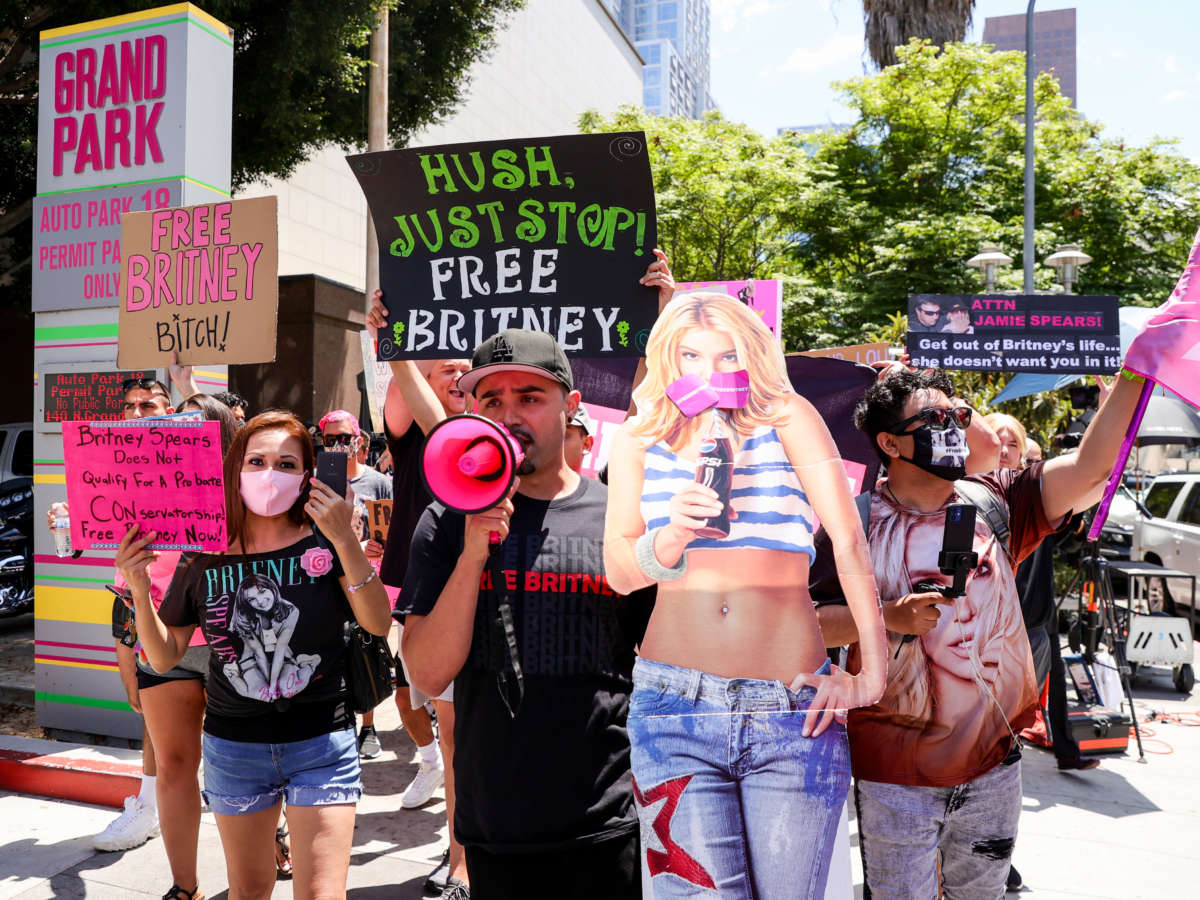 During a hearing Wednesday at Los Angeles Superior Court, Britney Spears asked the judge to be released from the literal control of her father, in a conservatorship that has dictated her life for the past 13 years.

Inside of her anguished remarks about her personal situation, there were many broader questions — about the intersection of gender and autonomy, enduring stigmas around mental health issues, how to grapple with toxic family dynamics, possible substance abuse, and the pressures that the entertainment industry and the media often put on young performers, especially female performers.

For a whole host of reasons, Spears seems to be have been caught right in the middle of a very un-perfect storm.

A Long History of Dominated Women

She’s far from the first female star to have had her career and life spiral out completely — in situations that have often taken place in the shadow of toxic parents and managers. You can draw a line, for example, between Judy Garland and Britney Spears. Garland was pushed into life as a child star by her mother and bulldozed by movie studio executives, whom Garland herself accused of pressing drugs like amphetamines on her when she was just a child. She died of a barbiturate overdose at 47 after struggling with alcoholism, drug dependencies and mental health issues.

Or think of Amy Winehouse — who was born two years after Spears in 1983. Winehouse very publicly struggled with substance abuse before her death from alcohol poisoning at age 27 in 2011. Winehouse’s father Mitch has been portrayed in a documentary about her as one of the primary enablers of his daughter’s addictions, along with her ex-husband, Blake Fielder-Civil. As Winehouse’s life imploded, the paparazzi and the entertainment press circled the singer, eager to pounce on the grimmest revelations and to document the lowest points in her life — just as they did to Britney Spears in the middle of her own, very public mental-health crisis. For Winehouse, just like for Spears, there was a voracious public eager to inhale all the gory details 24-7.

In her remarks in court Wednesday, Spears herself seemed to blame a generational divide, saying that she just couldn’t get away with rebelling the way that she thinks younger performers can. Spears namechecked 28-year-old Miley Cyrus (someone who has been audibly supportive of the #FreeBritney movement), saying that no punishment ever rained down on Cyrus even as “she smokes on joints onstage at the VMAs — nothing is ever done to this generation for doing wrong things,” Spears said.

The 39-year-old Spears is right about that in certain ways. She has some pop peers her own age and younger who particularly since the 2010s have worked hard to carve their own way — especially female artists who have managed to claim, or reclaim, their independence. Beyoncé (who’s barely three months older than Britney) stepped out of her father’s shadow and took the reins of her own career and brand. 31-year-old Taylor Swift, who shared a hit-making songwriter and producer with Spears in Max Martin, has famously fought to regain financial and artistic control of her catalog.

Maybe it’s not so much a generational divide, though, and something more about the times and places in which they became stars. When she was about 10 years old, in 1992, Spears started her professional career appearing on The Mickey Mouse Club, alongside her future boyfriend Justin Timberlake and fellow star Christina Aguilera.

Spears, Aguilera and Timberlake — the latter as part of the mega-star boy band ‘NSYNC — were all soon signed to labels that were part of the then-major label group BMG, which was eventually swallowed up by Sony Music Entertainment.

Back then, fresh out of college, I worked at BMG myself. Occasionally, my workmates and I would see Spears, ‘NSYNC and other shiny pop acts like ‘NSYNC’s archrivals, Backstreet Boys, at the BMG offices at Broadway and W. 45th St., right in the middle of New York City’s Times Square.

There was a pretty well-worn path: those glittery artists would pop into the labels’ corporate offices for a quick visit, and then a little while later appear on MTV’s afternoon live show, TRL, whose studio was directly across the canyon of Times Square from BMG. (Every weekday, our work would be interrupted by hordes of teenagers standing on the street outside of the TRL window — you could hear their excited screams erupt roughly every 30 seconds or so, even up 20 or 30 floors.) In today’s fractured landscape, it’s hard to imagine the pop-music hegemony that TRL and the big record labels held — but it was, as they say, a different time.

Spears was at the epicenter of that pop-culture monolith that dominated the 1990s, as were ‘NSYNC and Backstreet Boys. The groups had come up through a very particular industry located in Orlando, Fla., where ambitious, talented teenagers auditioned for boy and girl bands — a situation not unlike the K-pop machine of today.

Both Backstreet Boys and ‘NSYNC were founded by a manager named Lou Pearlman. (Eventually, nearly every artist or group who ever worked with Pearlman either won a lawsuit against him or settled out of court for cheating them out of compensation. Pearlman died in 2016 in prison, where he was serving a 25-year sentence for a half billion-dollar Ponzi scheme he had set up.) At least for a little while in the 90s, and at least for some artists, being duped by managers and impresarios was the price of the fame.

As a teenaged Spears strove for the limelight, Pearlman tried to sign her, too. Though she ultimately slipped out of his reach, Spears now says that she fell right into the hands of another Svengali-like figure: her own father, Jamie Spears.

According to Britney Spears, the legal conservatorship he helms has denied her not just due compensation, but has also taken away some of her basic rights — including the right to her own bodily autonomy, the right to have more children, the right to determine her own life choices (good or bad), and the ability to keep more of the money she earns, instead of making large payouts to her father, lawyers and other elements of the conservatorship. (According to The New York Times, Jamie Spears makes a salary of some $192,000 a year for running the conservatorship. By contrast, the Times says, Spears was given a $2,000 weekly budget while doing a very successful four-year residency in Las Vegas that reportedly grossed close to $138 million.)

After years of pretending publicly that things were OK, Spears is now flatly calling her situation “abusive.” She also said that she’s tried to raise her voice to the court before, but that her protests fell on deaf ears.

On Wednesday, however, Spears had certain forces marshalled behind her: the mounting pressure of #FreeBritney, the spotlight of media attention that has turned more sympathetic in recent years, and a public that these days seems less willing to turn Spears — and other women in music — into a punchline, or to simply stand by and consume tragedies as they unfold.