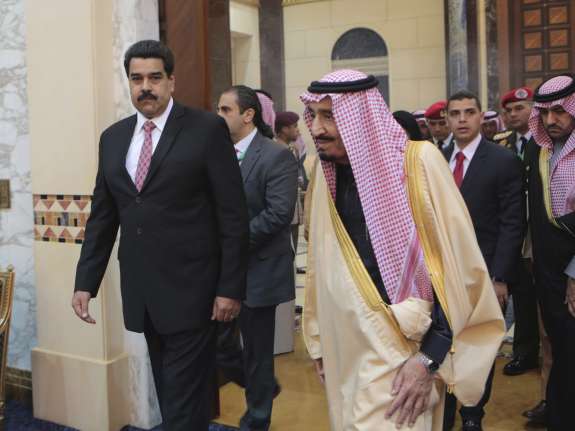 Venezuelan President Nicolas Maduro is trying to persuade his fellow OPEC leaders to reduce oil production as the price of crude continues to slide and hurt the Venezuelan economy, which depends on oil for 95 percent of its export revenue.

Maduro was in Qatar this week, seeking billions to shore up his economy.

“We’re finalizing a financial alliance with important banks from Qatar that will give us sufficient oxygen to help cover the fall in oil prices and give us the resources we need for the national foreign currency budget,” he said on state television, in a translation provided by Bloomberg.

Maduro was in China last week, where he announced that he had secured $20 billion worth of investment in Venezuelan energy and infrastructure projects. He is visiting members of the Organization of Petroleum Exporting Countries, the cartel of which Venezuela is a part, to seek funds to bolster his flailing economy.

He said Monday that the billions he had secured from OPEC countries “will give us enough oxygen to cover the fall in oil prices.”

The price of oil has fallen by nearly 50 percent since last year. It now stands at about $46 a barrel, a near-six-year low. Venezuela’s economy, which is heavily dependent on oil production, has been crippled by the fall in oil prices. The country’s budget is predicated on oil costing $117.50 per barrel, according to The Wall Street Journal.

Other oil-producing OPEC members are hurting, too. But some of them were defiant.

OPEC, whose members produce about 40 percent of the world’s crude oil, has steadfastly refused to cut production — a position it maintained in comments made today.

“I think the strategy will not change,” Emirati Energy Minister Suhail Bin Mohammed al-Mazroui said at an energy event in Abu Dhabi. “By not panicking and readjusting or cutting the output from the OPEC countries, we are telling the market and the other producers that they need to be rational. They need to be like OPEC.”

The Wall Street Journal reported that Mazroui said shale-oil producers in the U.S. will set the “floor” for falling crude prices. The newspaper called it “perhaps the most explicit challenge to U.S. shale producers yet.” It adds:

“For months, OPEC officials have signaled they won’t rein in prices because doing so would cede market share to non-OPEC producers. Most OPEC officials have shied away from pointing the finger publicly at shale. But the UAE made it clear: Only when prices are low enough that shale oil is uneconomic will markets stabilize. We haven’t seen that floor yet, as the February Brent contract plunges again toward $45 a barrel.”

The extraction of shale oil has made the U.S. a major producer. As NPR’s John Burnett reported last year: “The International Energy Agency has predicted that U.S. oil output will overtake Saudi Arabia’s by 2020. The effect of this boom in hydraulic fracturing, which breaks up shale rock and releases the petrochemicals, has been dramatic.”

U.S. shale production, according to one Goldman Sachs estimate, will take a hit only when oil prices are below $40 per barrel for about six months.