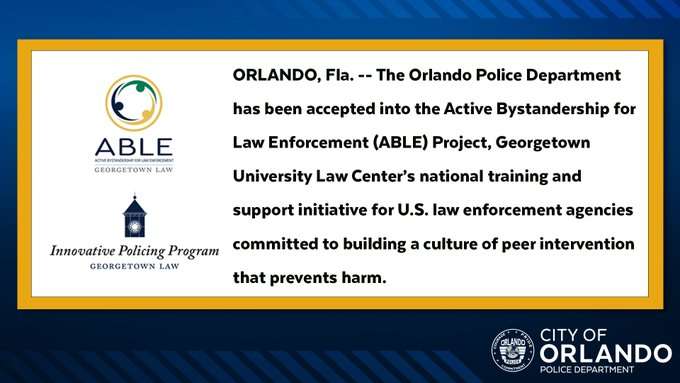 Every Orlando police officer will get training on when to intervene if they see use of excessive force.

ABLE PROJECT: The Orlando Police Department has been accepted into a national training initiative with @GeorgetownLaw. To learn more, go to https://t.co/VdBBjir3VD pic.twitter.com/fmK0b6h3Dk

OPD is one of 60 police departments throughout the country getting the training.

He says that could include when an officer is out in the field and witnesses another officer using excessive force or driving dangerously.

But Culley says it also includes being back in the office when someone is showing signs of distress in their professional or personal life.

“How many times have you seen somebody, a coworker that is going through a difficult period in their life, and you start to see the signs and symptoms. They’re tired or maybe there’s a suspicion that maybe there’s some chemical dependency or a host of other negative physiological and sociological behaviors. It’s uncomfortable to go in and have that conversation.”

Culley says the department is creating a health and wellness unit to consolidate resources around issues from police brutality to suicide prevention.