One Tough Question For DOJ If Biden Is Elected: Whether To Prosecute Trump 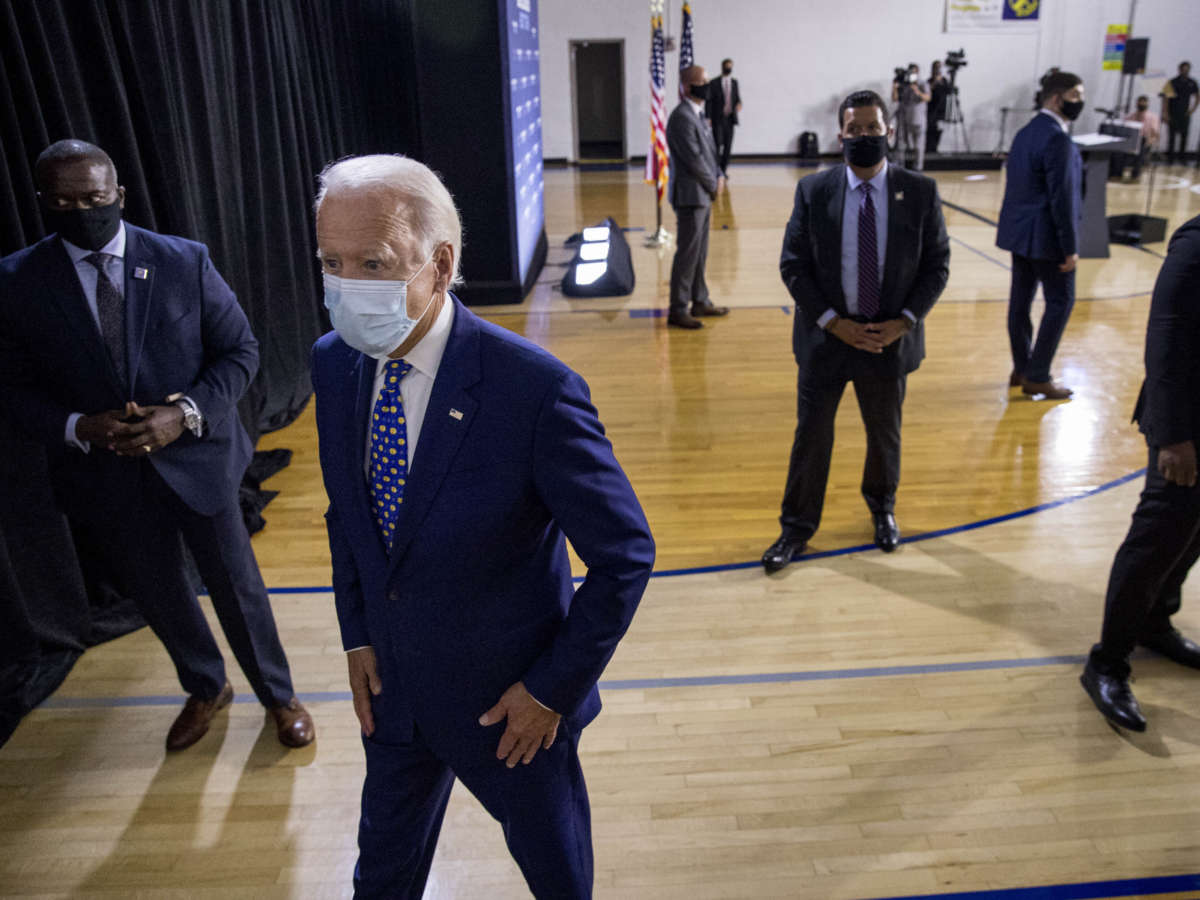 Former Vice President Joe Biden leaves a campaign event last month in Wilmington, Del. If Biden wins the election, he may face political pressure over what to do about President Trump.
Image credit: Andrew Harnik

If Joe Biden wins the presidency, his Justice Department will face a decision with huge legal and political implications: whether to investigate and prosecute President Trump.

So far, the candidate is approaching that question very carefully.

In a recent interview with NPR’s Lulu Garcia-Navarro, Biden said: “I will not interfere with the Justice Department’s judgment of whether or not they think they should pursue a prosecution.”

But he hastened to add that an administration pursuing criminal charges against its predecessor would be “a very, very unusual thing and probably not very, how can I say it? good for democracy — to be talking about prosecuting former presidents.”

Based on those remarks, Biden seems to be on the way to adopting the position of former President Barack Obama. Back in 2009, the newly elected Obama said he didn’t want to get hung up on prosecuting wrongdoers. He was referring to people who had engaged in torture and warrantless wiretapping during the previous administration.

Instead, Obama told ABC News at the time, his instinct was to make sure those practices never happened again.

“I don’t believe that anybody is above the law,” he said, “On the other hand, I also have a belief that we need to look forward, as opposed to looking backwards.”

A presidential desire to “look forward” and move ahead is what prompted President Gerald Ford to pardon his predecessor, President Richard Nixon, after the revelations about Nixon’s abuse of power in Watergate.

In Obama’s case, the Justice Department ultimately convicted only one person, a government contractor, for abusing a detainee who later died. But Biden could have a harder time drawing those kinds of lines today.

Trump is an unusual case

“It’s not at all clear that looking forward and not looking backward is an available option,” Harvard Law School Professor Jack Goldsmith said.

Goldsmith said most people aren’t talking about how a Biden Justice Department might handle Trump but said he thinks they should be.

Congress and Manhattan District Attorney Cyrus Vance Jr. have open investigations into Trump and his company. Federal prosecutors have looked at his campaign payments in 2016 and his inaugural committee.

Former Justice Department special counsel Robert Mueller made clear that his investigation did not clear Trump of potential lawbreaking in connection with the president’s attempts to quash the Russia investigation. Democrats and some former prosecutors hostile to Trump called his actions obstruction of justice.

But the Justice Department twice has opined that prosecutors can’t seek an indictment against a sitting president. That’s left open the question about whether he might face prosecution once he leaves office.

It’s never happened before, and it’s a political time bomb. Bringing a criminal case against a former president could widen the divide in the country.

There could be a lot of political pressure. Trump is deeply unpopular with Democrats. If Biden wins, and Democrats increase their control in Congress, the calls for Trump to be charged could intensify.

Democrats impeached Trump in a process that ran from 2019 into this year over the Ukraine affair, but Republicans used their majority in the Senate to protect the president.

Some of Biden’s rivals for the Democratic nomination didn’t seem to think a Trump case would be a hard call. Sen. Kamala Harris of California, Biden’s newly minted running mate, pointed to what she called evidence of obstruction of justice uncovered by Mueller.

Harris told The NPR Politics Podcast last year that the next Department of Justice would have “no choice” but to act.

“I do believe that we should believe Bob Mueller when he tells us, essentially, that the only reason an indictment was not returned is because of a memo in the Department of Justice that suggests you cannot indict a sitting president,” Harris said. “But I’ve seen prosecution of cases based on much less evidence.”

The prospect for post-election prosecutions has become part of campaign politicking.

Trump, when he ran in 2016, called his opponent, Hillary Clinton, “crooked” and ate it up when crowds called for Clinton to be incarcerated. Retired Army Lt. Gen. Michael Flynn joined the audience in cheers onstage four years ago at the Republican National Convention.

Ultimately, the Trump administration has brought no charges against Clinton. But it has launched investigations into former FBI Director Jim Comey, his deputy Andrew McCabe and the intelligence gathering process in 2016. And the president has extended the theme to Biden and Obama, including with an attempt to brand what he calls a scandal “Obamagate.”

Trump frequently mentions those investigations on Twitter or in public comments.

In a recent interview on Fox News, Trump’s attorney general, William Barr, lamented how the justice system has become a political weapon.

“I think all political sides have gotten into the habit in this country of just sort of saying that their political opponents have done something terrible,” Barr said. “They think it’s terrible. You know, ‘It’s enough for me to conclude he is terrible. Why isn’t he in prison?’ ”