One rocket engineer’s quest to make STEM more diverse, one TikTok at a time 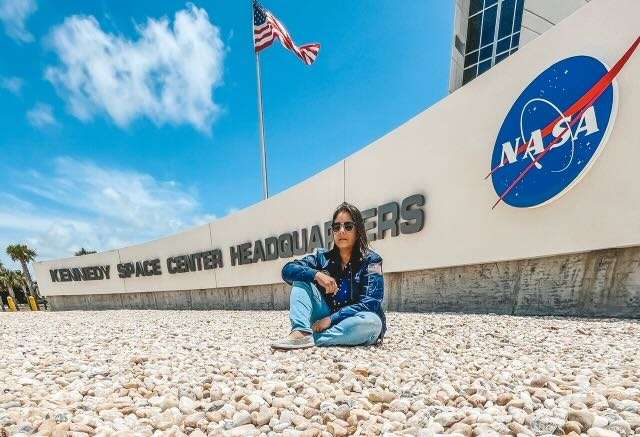 We continue our holiday series highlighting people working to make the world a better place with a story about Joan Melendez Misner. By day, she’s a rocket engineer at NASA’s Kennedy Space Center. But in her free time, she’s creating social media content on Instagram and TikTok to inspire the next generation of engineers, especially underrepresented people like hispanic women.

Melendez Misner poses in front of the Falcon 9 rocket that will launch the DART mission to an asteroid: Photo: Joan Melendez Misner.

Most recently, Melendez Misner helped NASA’s launch DART — the agency’s first test mission to redirect an asteroid. The goal is to find a method to potential nudge an asteroid heading for Earth off its course and save the planet.

“It’s like the real life [movie] Armageddon,” she says of her first mission with NASA. “Being able to work on space hardware that is going to test the ability to defend our planet — we call ourself, planetary defenders — was just really neat.”

“You don’t wake up as a kid, and say ‘I just want to work on launch stuff.’ It was a it was a long road,” she says. In college, Melendez Misner studied medical sciences. After working in a hospital, she realized a career in medicine wasn’t for her. A college guidance counselor suggested she pursue engineering instead.

After some convincing from that counselor, Melendez Misner took an internship working with fighter jets. “I was hooked.”

“When I was going through middle school, high school, we had the internet, but I didn’t really see a lot of people that look like me in the positions that I was going for,” she says. “That’s what my main motivation of doing outreach is. So everyone who’s a Hispanic woman in STEM, or just a young female, looks at me and can see themselves in me. That’s what drives me and pushes me to do a lot of this content.”

“Even though I have had all of these awesome experiences, there were points where I had depression because I failed classes, or I had immense imposter syndrome because I didn’t think that I belong to where I was,” she says. “I want people to understand that we are human, that we are not just the highlight reel that we see on social media, that we are all of these things underneath that as well.”

But the most important thing for her is for other women to see themselves in her — and to inspire them to pursue a career in engineering. “An Anglo Saxon man is what I usually pictured as an engineer, as a rocket scientist,” she says. “I want to break those stereotypes.”

She’s heard from all sorts of people who have seen her videos and pursued an education and career in STEM — science, technology, engineering and mathematics. Some have gotten internships at NASA, and she’s even met a few at Kennedy Space Center.

She also met a 5-year-old girl from England, Evie. Her mom discovered Melendez Misner on TikTok and shared her videos with her daughter.

“Evie wants to be a NASA engineer when she grows up,” says Melendez Misner.” It was just so, so amazing. She’s now a pen pal.”

“I had tears in my eyes because you know, it after a long day doing social media, doing content creation — being able to see individual ones, especially young girls who already know that they want to become engineers, is just really so satisfying.”