One Of Biden’s Biggest Climate Change Challenges? The Oceans 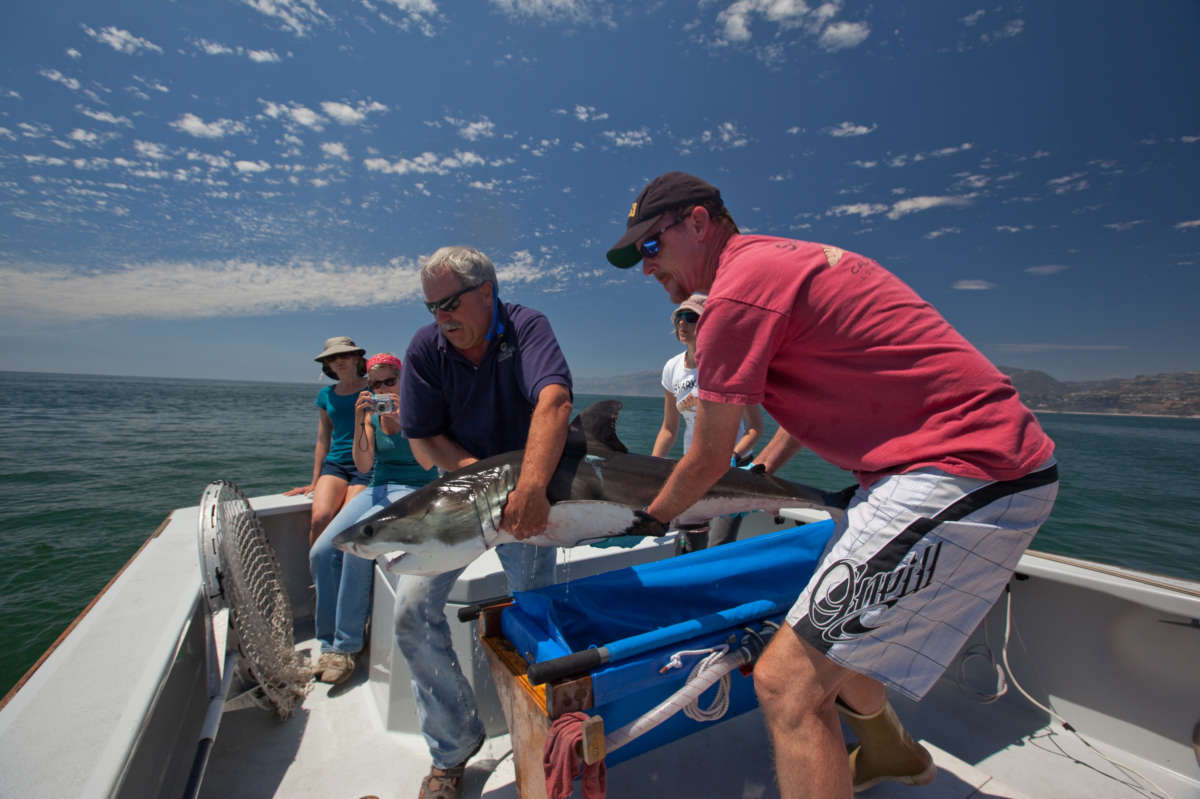 Scientists John O'Sullivan of the Monterey Bay Aquarium and Chris Lowe of California State University release a tagged juvenile white shark off Southern California, part of an effort to track their movement.

A few years ago, marine biologist Kyle Van Houtan spotted an online video that he couldn’t quite believe. It showed a young great white shark, about five-feet long, swimming just off a pier in Central California.

“Our initial reaction was that it can’t be true,” Van Houtan says. “We know that they’re in Southern California and Mexico, not in Monterey.”

When they’re young, white sharks typically live in the warm waters of Southern California, hundreds of miles from the cold, rough surf up north off Monterey.

Still, the shark in the video wouldn’t be the only one to appear. Since 2014, young white sharks have been arriving off Monterey in greater numbers.

The sharks were simply following the water temperatures they’re adapted to. The ocean was warmer, shifting the sharks’ habitat from where it’s normally found. Similar shifts are being seen around the world, just one of the ways that climate change is hitting the oceans hard.

Ocean scientists say the Biden Administration is taking office at a critical time. Sea levels are rising, fish are migrating away from where they’re normally caught, and the water itself is becoming more acidic as it absorbs carbon dioxide that humans emit.

While the administration has appointed climate change advisors throughout the federal government, a key role remains unfilled: the head of the National Oceanic and Atmospheric Administration, an agency that oversees everything from fisheries policy to marine sanctuaries.

“The ocean is not just a victim,” says Miriam Goldstein, director of ocean policy at the Center fo American Progress. “The ocean can also be a hero. The ocean can protect us from the climate change that’s already underway.”

The arrival of the young white sharks in Central California coincided with another unusual event, known as the “blob.” A marine heat wave was spreading across the waters of the north Pacific Ocean.

“That was some of the warmest water we’ve ever had in recorded history off the West Coast of the U.S.,” Van Houtan says, who is the chief scientist at the Monterey Bay Aquarium. In Monterey, water temperatures were as much as 10 degrees above average.

Thus far, the oceans have literally been taking the heat from climate change. Over the last 50 years, they’ve absorbed more than 90% of the excess heat in the atmosphere from human-caused warming.

Young white sharks congregate in Southern California for its warmer water. Only later, when they bulk up considerably, do they move into cooler waters, eventually growing to 15 feet. As the marine heat wave spread, the sharks followed their patch of warm water as it moved north up the coast, according to a new study. Overall their available habitat shrank, since the temperatures to the south and west were no longer tolerable.

While the water has cooled a bit recently, the white sharks have stuck around. Scientists still aren’t sure how it could affect the overall ecosystem as new species come into contact with the established native species.

“Predators and prey are now crowded into smaller spaces,” Van Houtan says. “If I’m a prey species, there’s just fewer places to hide. And that is a big concern when you’re thinking of the overall picture and you’re thinking of commercial fisheries and sardines and salmon.”

But Van Houtan cautions that the sharks themselves are not the problem. Marine heat waves are expected to become hotter and last longer due to climate change.

Similar shifts are happening across the oceans. On the East Coast, lobsters are moving north, one of the reasons that fishermen in southern New England are increasingly finding their traps empty. The fishing fleet in North Carolina is having to travel farther and farther north to find their catch.

Most fishery regulations weren’t written with these dynamic changes in mind. Some rules are controlled by states, even though fish move across state lines. Others limit fishing to fixed areas, governed by lines on a map that may mean little as species move elsewhere.

“Our management system has not caught up,” Goldstein says. “So we need to look at what it will take to help these fishing communities, fishermen, processors adapt to what unfortunately is the new reality.”

In addition to warming, the ocean is also becoming more acidic because it’s absorbing carbon dioxide from the atmosphere, posing a significant threat to oysters and other shellfish.

As a result, scientists say that cutting overall heat-trapping emissions will be crucial for ocean health, a policy the Trump Administration rolled back. Trump also sought to expand offshore oil and gas leasing in the oceans and removed protections for the Northeast Canyons and Seamounts Marine National Monument, a unique underwater canyon ecosystem off the coast of New England.

“I think it’s fair to say that the last four years were pretty rough for the environment and they were certainly rough for the ocean,” says George Leonard, chief scientist at Ocean Conservancy.

Without a new leader appointed at NOAA so far, the Biden Administration’s ocean agenda hasn’t been spelled out yet, aside from the agency’s recent request for feedback about how to make ocean policy resilient to climate change. The goal with the biggest potential impact is Biden’s 30×30 commitment, which aims to conserve 30% of the land and oceans by 2030.

“The ocean needs a lot more protection,” Leonard says. “We have a biodiversity crisis in the ocean and that’s being driven by climate change and overexploitation. Process really matters with 30×30. This isn’t just about fish. It’s about people too. There are a lot of people and communities who can get hurt if establishing protected areas isn’t done in a just and equitable way.”

Traditionally, fishing groups have largely fought ocean conservation, since it can limit access to valuable fishing grounds. But some say the effects of climate change mean the conversations need to start now.

“Everybody I talk to, everybody I work with is seeing things change,” says Eric Brazer, deputy director of the Gulf of Mexico Reef Fish Shareholders’ Alliance, an association of Gulf Coast fishermen. “They are the ones who often see and experience these changes before anybody else does.”

Brazer says if the Biden Administration wants to be successful, it will need to work with local groups from the outset. Recently, NOAA tripled the size of Flower Garden Banks National Marine Sanctuary off the coast of Texas and New Orleans. Even though it limited fishing, Brazer says his colleagues were ultimately supportive since they had been involved in the conversations from the beginning.

“Fishermen’s businesses are going to be impacted by this,” Brazer says. “That’s why it’s especially critical for us to be at the table, be at the podium, have access to the managers and start to answer these questions that are unanswered at this point.”