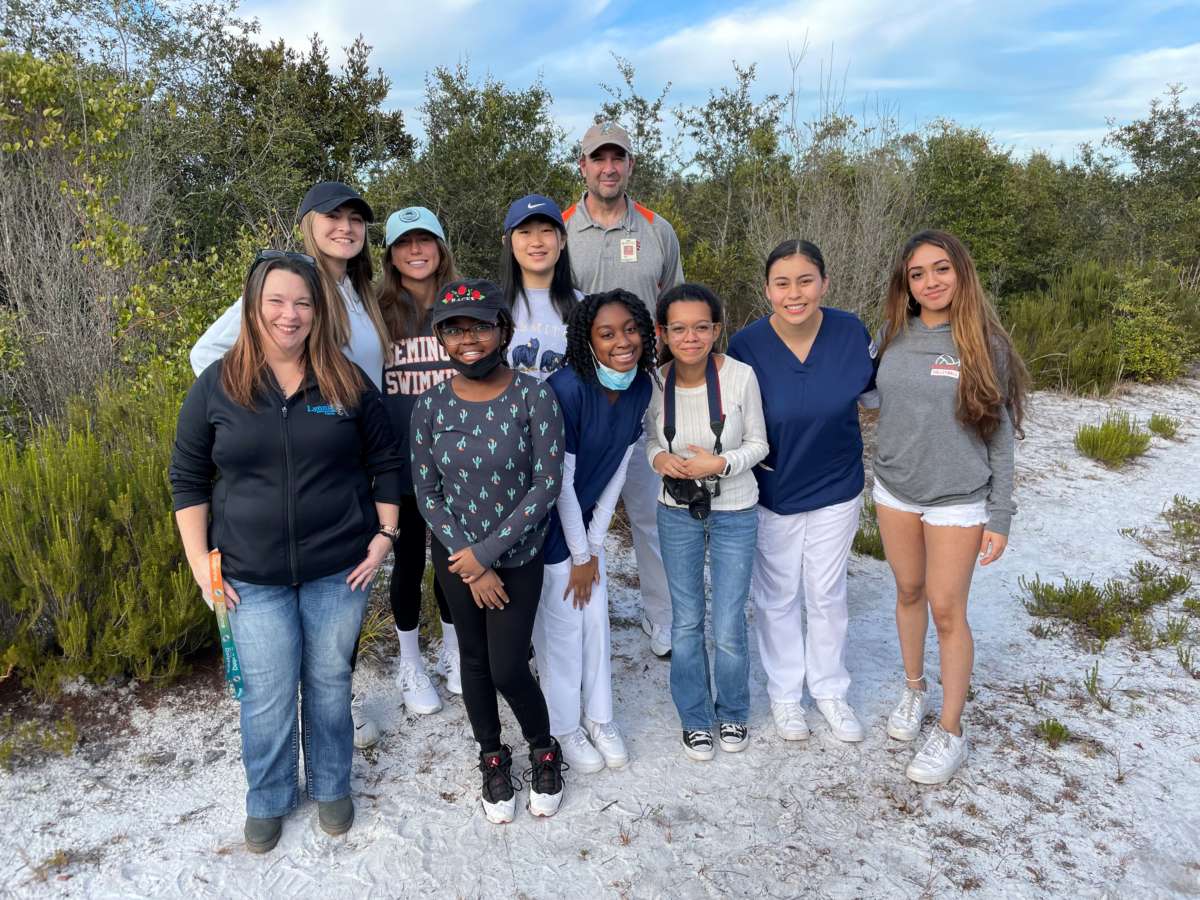 Kris Cole (back center), and the rest of the Wildlife Conservation Club at Seminole High School think the Florida scrub-jay should be the state bird. Sandy Falcon (front left) is the manager at the Lyonia Preserve. Photo by Amy Green

UPDATE: CORRECTS that Seminole High School is in Sanford.

Here’s a pop quiz: what is Florida’s official state bird?

If you guessed the mockingbird, you’re right. But some Floridians want to change that.

Mailyn Loredo points up into the shrubby oak.

“It’s jumping around. Right there, look.”

The Florida scrub-jay primarily is found in the uplands of central Florida. Photo by Amy Green

There among the leaves at Lyonia Preserve in Deltona is a rare Florida scrub-jay. The soft blue and heather-gray bird beats its wings as it jumps from branch to branch.

Mailyn, an 11th grader, and the rest of the Wildlife Conservation Club at Seminole High School in Sanford think the scrub-jay should be Florida’s state bird. They say the scrub-jay attracts birders from across the globe because it is found only in Florida, primarily central Florida.

Navya Sharma, another 11th grader and club member, thinks the bird would represent Florida well with its strong family values.

The students are not the only ones who think Florida needs a new state bird. Two bills in the Legislature this session are reviving a decades-long debate over whether the state needs an official bird that is more distinctive of Florida. Senator Jeff Brandes, a Tampa Bay-area Republican, is the sponsor of one of the bills.

Arkansas, Mississippi, Tennessee, Texas and Florida all have declared the mockingbird as the state bird.

But here in Florida, the mockingbird has a powerful supporter: lobbyist Marion Hammer. Hammer helped write the state’s controversial “stand your ground” law but is best known due to her former role as president of the National Rifle Association. As she noted in one op-ed, the mockingbird “has never needed government protection or our tax dollars to survive.”

Other contenders for state bird have included the flamingo and roseate spoonbill, a flamingo-like bird found in south Florida. The osprey, a raptor also in south Florida, has been another candidate. Julie Wraithmell of Audubon Florida says the official bird is important because it helps to define the state’s identity, although she says the organization does not favor one bird over another. She praised the high school wildlife club for tackling the issue.

“Floridians pride ourselves on being unique and individual, and so making sure that we have a distinctive state bird is something that these high school students have identified as important to them, and I would tend to agree.”

The students of the wildlife club at Seminole High School look high and low for Florida scrub-jays. Photo by Amy Green

Back at Lyonia Preserve in Deltona, Kris Cole says that 20 years ago, he was searching for a way to teach letter-writing and heard that Audubon was pushing for a new state bird. Cole teaches environmental science at Seminole High School and supervises the wildlife club.

“This bill is so much more than just about a state bird. This is about the future of America having a say in what they want.”

So far, neither measure has seen much action in the legislative session, although the Senate voted unanimously to name Strawberry Shortcake as the state dessert.