‘Once In A Blue Moon’ Is Happening Again This Halloween 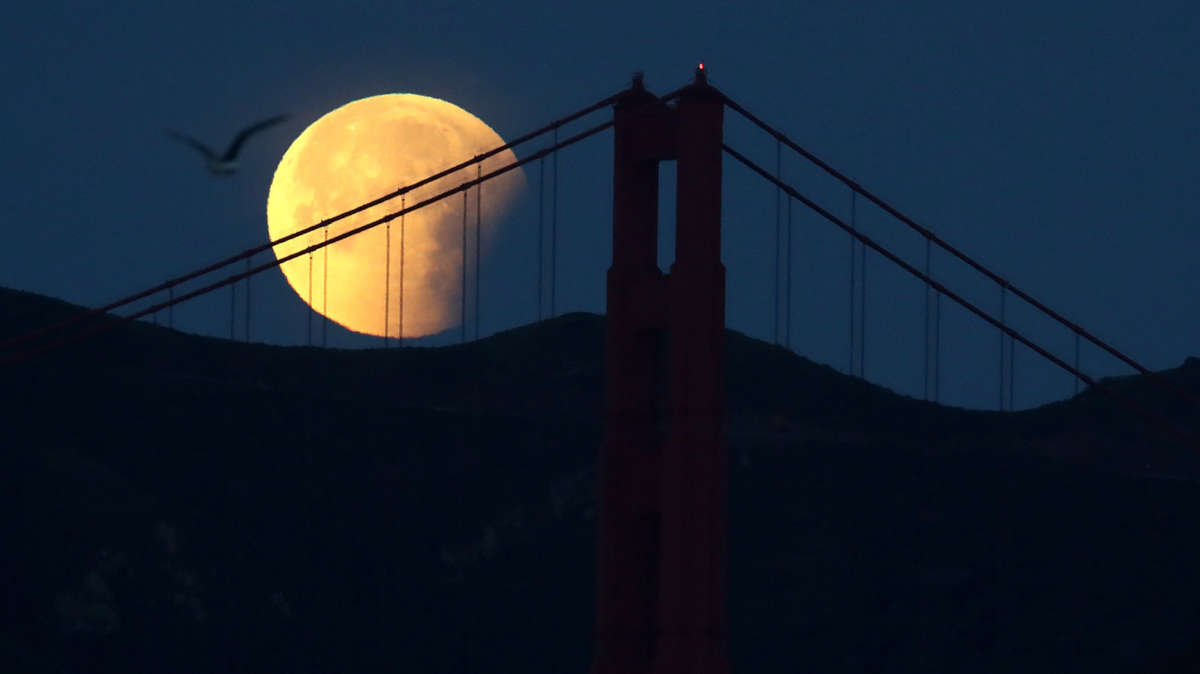 SAN FRANCISCO, CA - JANUARY 31: A partially eclipsed super blue blood moon sets behind the Golden Gate Bridge on January 31, 2018 in San Francisco, California. The 'super blue blood moon' is a rare 'lunar trifecta' event in which the Moon is at its closest to the Earth, appearing about 14 percent brighter than usual, and is simultaneously a 'blue moon', the second full moon in the same month, as well as a total lunar eclipse or 'blood moon'. This is the first such lunar event seen in North America since 1866. (Photo by Justin Sullivan/Getty Images)

This year, there will be a full moon on Halloween. This makes it a “blue moon,” since it’s the second full moon in one calendar month. This phenomenon usually happens around every 2.7 years. So maybe something that happens “once in a blue moon” isn’t actually that rare after all.

However, the blue moons we know and love — when two full moons can be seen in a month — is a comparatively recent definition.

As Corrine Rojas, a planetary scientist, explains that the term blue moon used to refer to the third of four full moons to happen in a season — specifically, the moon “between an equinox and a solstice in that year.” That’s because astronomers define seasons according to equinoxes and solstices, as opposed to the three-month chunks meteorologists use.

According to earthsky.org, this switch from the seasonal blue moon stems from a 1946 oversimplification in Sky and Telescope magazine. The mistake was apparently then amplified on the radio show StarDate and, later, by Trivial Pursuit.

In both cases, there’s a bonus moon.

To understand why either of these blue moons happens, it’s key to understand the lunar cycle. It’s shorter than most calendar months, lasting an average 29.5 days, according to the synodic cycle. Hence, there will eventually be a second full moon within the same calendar month.

Even rarer? A moon that actually looks blue.

For the moon to actually appear blue is a whole different matter. There has to be enough matter of a particular size kicked into the atmosphere that red light is scattered. The popular example of this is the 1883 eruption of the Indonesian volcano Krakatoa. According to NASA, the eruption was so large that for years afterwards, the moon appeared bluish and sometimes greenish. The volcanic ash particles were large enough to block out red wavelengths of light, while other wavelengths carried on as usual.

Yellow-hued moons are more common. When the moon is close to the horizon, the sunlight illuminating the moon has to travel farther. Along the way, the blue wavelengths are scattered, leaving behind the longer, redder wavelengths.

All of those are just a trick of light, though. “The moon will remain its beautiful, gorgeous color we know and love,” Rojas says. That is, gray and white — like today’s moon.

For Rojas, the moon is beautiful no matter its shade. “I’ve always loved staring at the moon. I call it my first love.”

Follow Maddie and Rebecca on Twitter for more science nuggets. Maddie’s @maddie_sofia and Rebecca’s @rebeccalramirez. Email the show your celestial musings and inquiries. We’re at shortwave@npr.org.

This episode was produced by Thomas Lu, edited by Viet Le and fact-checked by Ariela Zebede.