On the “Souls to the Polls” Sunday Before Election, Voting Isn’t Just a Civic Duty. It’s a Religious One. 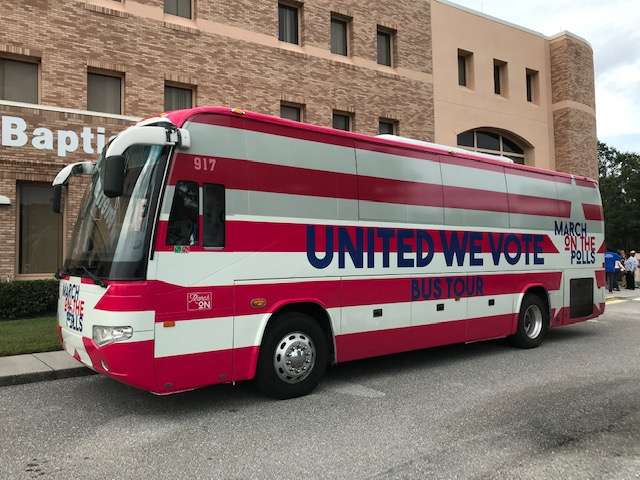 March on the Polls provided transportation to early voting sites like the Orange County Supervisor of Elections. Photo: Danielle Prieur

Political leaders visited churches throughout Orlando yesterday in a final push to get people to vote early this election. It’s part of a national campaign to get more people to participate in the state’s midterm elections. Efforts like this seems to be working, with more than 4.8 million Floridians voting early.

The President of the NAACP Derrick Johnson joined Democratic U.S. Senator Bill Nelson and U.S. Representative Val Demings in addressing four historically black congregations Sunday as part of a national “Souls to the Polls” campaign. At New Covenant Baptist Church, Johnson said congregants had a civic as well as a religious duty to vote.

“The health of any society is based on how well we care for our elderly. Whether or not we provide and train our young people. And if we provide the rights of the disadvantaged. That’s the Christian thing to do so it’s important for us to go out and inform public policy.”

Nonprofit March on the Polls that was on hand at each stop to provide transportation to Orange County’s early voting sites.

Andi Pringle who volunteers with the group says a lack of transportation that can lead to a sense of isolation can keep voters from participating in early voting. That’s why she says events like this one are crucial:

“When they vote together they’re more inclined to go and vote. Instead of waiting for Election Day. It’s more of an individual thing because you’re relegated to your individual precinct. It’s a lot more restrictive.”

Efforts like “Souls to the Polls” appear to have been working. According to the Florida Division of Elections, more people are voting early this year than in the 2014 mid-term elections, when 3.1 million Floridians voted early.

On Election Day, Uber is offering ten dollars off the cheapest ride to the polls. While Lyft is offering a limited number of free rides. Otherwise, most rides will be reduced by fifty percent.