On The Road To Women’s Rights, Susan B. Anthony Stomached Plenty Of Bad Food 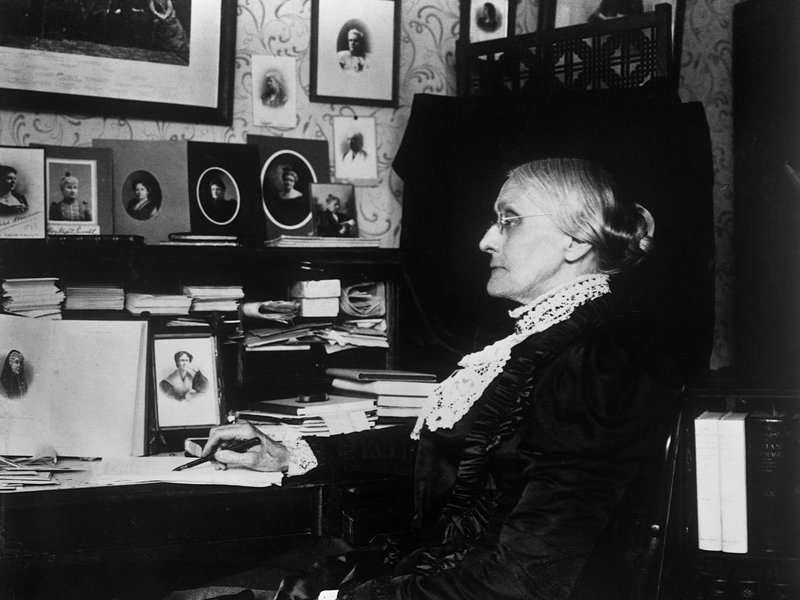 For 45 years, Susan B. Anthony traveled the U.S. relentlessly, stumping for women's rights. She endured ridicule, was hanged in effigy and faced many horrid meals on the road. Nevertheless, she persisted. Corbis via Getty Images

She was hanged in effigy and mocked in cartoons; laughed at by Congress for demanding equal rights for women and fined for casting her “illegal” vote in 1872; shouted down at public meetings and ridiculed in the press by the upright and uptight columnists of the day. That Susan B. Anthony, champion of the women’s movement in the U.S., had to suffer these ignominies is well known.

Less well known is the grueling physical hardship she endured in her long and tireless quest to get women the right to vote. For 45 years, Anthony traveled relentlessly, giving close to a hundred anti-slavery and woman’s suffrage speeches a year. This meant that she quite literally lived on the road – travelling through snowstorms and blizzards by train, wagon, boat, skiff and sleigh. She stumped her way through New York, Kansas, Nebraska, Iowa, Wisconsin, Michigan, Illinois, Nevada, Oregon, Washington, California and even – against the advice of other suffragists – “polygamous Utah.” Often the only woman in the room, she spoke at any public venue that opened its doors to her – from African-American churches and saloons to teachers’ institutes, railroad depots, abandoned barracks and tobacco factories. Once, she even lectured from atop a lumber wagon.

The journeys were punishing and the reception, while sometimes warm and encouraging, was often apathetic, sullen or viciously combative. On the eve of the Civil War, when the national mood was fissile, rotten eggs were lobbed at the stage and cayenne pepper flung on the stove to disrupt the meeting. Implacable, Anthony stood her ground. But one can well imagine how much she and her companions longed for a hot meal and a clean bed after these brutal encounters. In most cases, however, they went back to a dirty hotel and terrible food.

“Most of the food served them was green with soda or floating in grease and the hotels were infested with bedbugs,” writes her biographer Alma Lutz in Susan B. Anthony: Rebel, Crusader, Humanitarian. “Susan wrote her family of sleepless nights and of picking the ‘tormentors’ out of their bonnets and the ruffles of their dresses.” One South Dakota hotel served “sour bread, muddy coffee and stewed green grapes.” In others they were faced with unclean water, straw pallets and coffee without cream or milk, sweetened only with sorghum – a good cup of coffee was something Anthony sorely missed, as is evident from a report she filed for a newspaper describing how she “luxuriated in a Christian cup of coffee” in Trinidad, Colo.

“I can assure you that my avoirdupois is being rapidly reduced,”Anthony wrote with characteristic humor in a letter to her family in Rochester, N.Y. Fortunately, she had a robust constitution and weathered the harsh travel conditions mostly without complaint, but a plangent sigh in her diary reflects her frustration: “O, the crimes that are committed in the kitchens of this land!”

The unhealthy food they were served in hotels and many homes was, sadly, characteristic of the age. “One of the greatest trials these travelers had to endure was the wretched cooking which was the rule and not exception among our much-praised foremothers,” writes another biographer, Ida Husted Harper, in The Life and Work of Susan B. Anthony:

“In those days the housewife could not step around the corner and buy for two cents a cake of yeast which insured good bread, but the process of yeast-making was long and difficult and not well understood by the average housekeeper, so a substitute was found in ‘salt risings,’ and a heavy indigestible mass generally resulted. White flour was little used and was of a poor quality. Baking powder was unknown and all forms of cakes and warm bread were made with sour milk and soda, easily ruined by too much or too little of the latter. In no particular did the table compare favorably with that of modern families.”

Anthony was herself an excellent and competent cook – an accomplishment that came as a surprise to those who believed that suffragists were kitchen-hating viragoes who couldn’t boil water or feed their families because they were out pounding the streets and shrieking for the vote. The anti-suffrage pamphlets of the time were full of sneers: “Good cooking lessens alcoholic craving quicker than a vote.”(Many suffragists were often also temperance movement advocates.) Or, “You do not need a ballot to clean out your sink.” The ballot, critics warned, would “unsex” women. Anthony, who was unmarried, was especially vulnerable to being typecast as the undomesticated and unattractive spinster, never mind that she was “a stately Quaker girl” (in the words of her close friend Elizabeth Cady Stanton), who dressed in quiet but expensive clothes and could pickle, can, garden, varnish, quilt and bake as well as anyone with a brood of children.

Often, friends of the suffragists invited them home. But this came with its own hazards, since many of those who sympathized with progressive causes were also “cranks” – to use the terminology of the day — in thrall to a pure food regimen. In one affluent house in a town near New York City, Anthony and her two friends were offered nuts, apples and baked bran-and-water (which supposedly helped to “sweep out” the intestines, in the words of John Harvey Kellogg, a prominent advocate of this kind of ascetic diet) for three meals in a row. After that, her two male abolitionist companions fled, leaving Anthony to stay on through the weekend for the Monday meeting. “She lived through it,” writes her biographer Harper, “but on Tuesday started for New York and never stopped till she reached Delmonico’s, where she reveled in a porterhouse steak and a pot of coffee.”

But travel is full of strange twists. And Anthony discovered that coffee and courtesy could turn up in the most unexpected places: in a hovel and a saloon, respectively.

Stuck for hours in Missouri in a fetid train car full of families – “Any decent farmer’s pigpen would be as clean as that car,” she wrote – Anthony was desperate to get out and join the men who were having a wash at a hovel that stood on the bank. Finally, she got out, rushed up to the woman in charge and asked if she would sell her a cup of coffee. What happened next took her by surprise in the nicest way possible. The woman, wrote Anthony, “grunted out yes, after some hesitation, and while she was making it, I washed my face and hands. When she handed me my drink she said, ‘This is no rye; it is real coffee.’ And so it was and I enjoyed it, brass spoon, thick, dingy, cracked cup and all.”

As for courtesy, it was extended to her by those she described as the “roughest group” she had ever encountered – the miners in the boomtown of Leadville, Colo. Since the town’s saloon was the largest public space available, Anthony spoke there about women’s rights. In deference to her temperance views, the owner draped yards of calico over the bottles behind the bar to hide them from the public. The room was so packed with miners that the crowd overflowed onto the street. When they saw that Anthony was coughing, they immediately put out their pipes (and ordered more drinks). Against every expectation, she was warmly applauded, and when she asked for donations, the men passed a hat around and filled it up with gold dust and nuggets.

Sixteen years later, in 1893, Colorado became the first state to enact women’s suffrage by popular referendum – and Anthony was alive to savor that victory. Though she died before the historic 19th Amendment was passed in 1920 granting American women the right to vote, she knew that its passage was inevitable. As she famously said in her last speech in 1906, a month before she died, “Failure is impossible.”

The steeliness of her resolve is captured in an incident that occurred at the Fort William Henry hotel in New York state, when Anthony tried to order her own breakfast. Also present at the table was the abolitionist Aaron Powell and suffragist Antoinette Blackwell, who provided the following gleeful account to Harper:

“I remember a rich scene at the breakfast table. Aaron Powell was with us and the colored waiter pointedly offered him the bill of fare. Miss Anthony glanced at it and began to give her order, not to Powell in ladylike modesty, but promptly and energetically to the waiter. He turned a grandiloquent, deaf ear; Powell fidgeted and studied his newspaper; she persisted, determined that no man should come between her and her own order for coffee, cornbread and beefsteak. ‘What do I understand is the full order, sir, for your party?’ demanded the waiter, doggedly and suggestively. Powell tried to repeat her wishes, but stumbled and stammered and grew red in the face … while she, coolly unconscious of everything except that there was no occasion for a ‘middleman,’ since she was entirely competent to look after her own breakfast, repeated her order, and the waiter, looking intensely disgusted, concluded to bring something, right or wrong.”

One phrase in that paragraph will jump out at the contemporary reader: She persisted. Through green soda bread, muddy coffee, bedbugs, rotten eggs, and patriarchal waiters, Susan B. Anthony stumped right on.