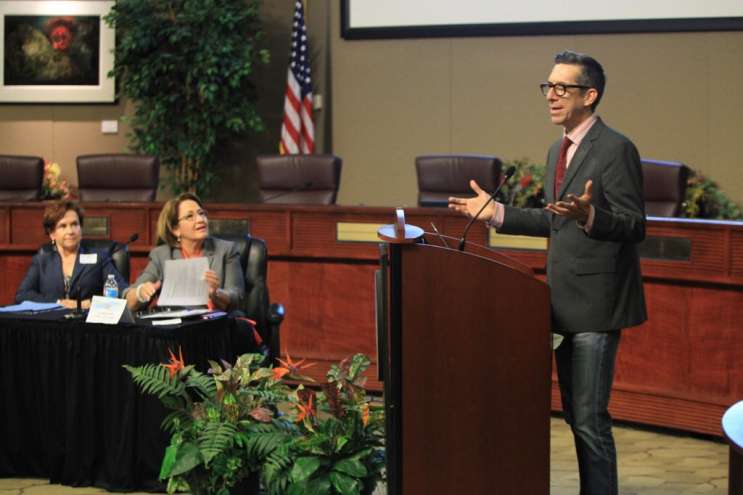 Former WFTV anchor Mark Joyella spoke about his struggle to come out as a journalist with a mental illness. (ORANGE COUNTY PHOTO)

While many of the topics discussed are well-known in certain circles, some of these may surprise the average reader. So I’ve put together six things that stood out on the issue.

ONE: Those with mental illness only commit 3 to 5 percent of violent crimes. In fact, those with mental illness are far more likely to become the victims of crime than to be the perpetrator. It’s one of those situations where the media’s coverage of the mentally ill as being violent people who should be feared actually adds to the stigma of mental illness. And that’s not just one man’s opinion; John Hopkin’s researchers analyzed media coverage and found a whopping 40 percent of news stories link violence with mental health, despite empirical evidence to the contrary.

TWO: That stigma costs lives, as Orange County Mayor Teresa Jacobs put it. Jacobs told her own story: Her brother had bipolar disorder and was a recovered alcoholic who committed suicide. She said she didn’t want to tell her brother’s story publicly because she was afraid of how the media would then treat her as a politician.

FOUR: If you’re wondering where people many people with mental illness get services, look no further than the jail system. Dr. Leonard Branch, chief psychologist of the Orange County Corrections Department, said between 25 and 30 percent of people in Orange County’s jail are on medications for mental illness. The history of this actually traces back to the 1960s, when lawmakers became horrified at the treatment of the mentally ill in “institutions,” or asylums, and legislated that those with mental illness get care in the community. But no one bothered to fund it, and Branch said over the last 50 years, the mentally ill have been “transinstitutionalized”; in short, the jails took over. If you’ve got some time and some Kleenex, head over to the Orlando Sentinel for Kate Santich’s fantastic coverage of this issue two years ago – before Florida became dead last.

FIVE: Former WFTV anchor Mark Joyella talked about his struggle over the years to come out as someone with mental illness. Joyella has obsessive compulsive disorder. That does not manifest itself in the way you think it does. He worried that coming out professionally would ruin his career. Read his powerful essay, wonderfully titled “screw stigma,” here, as well as his call for more journalists to come out as having mental illness.