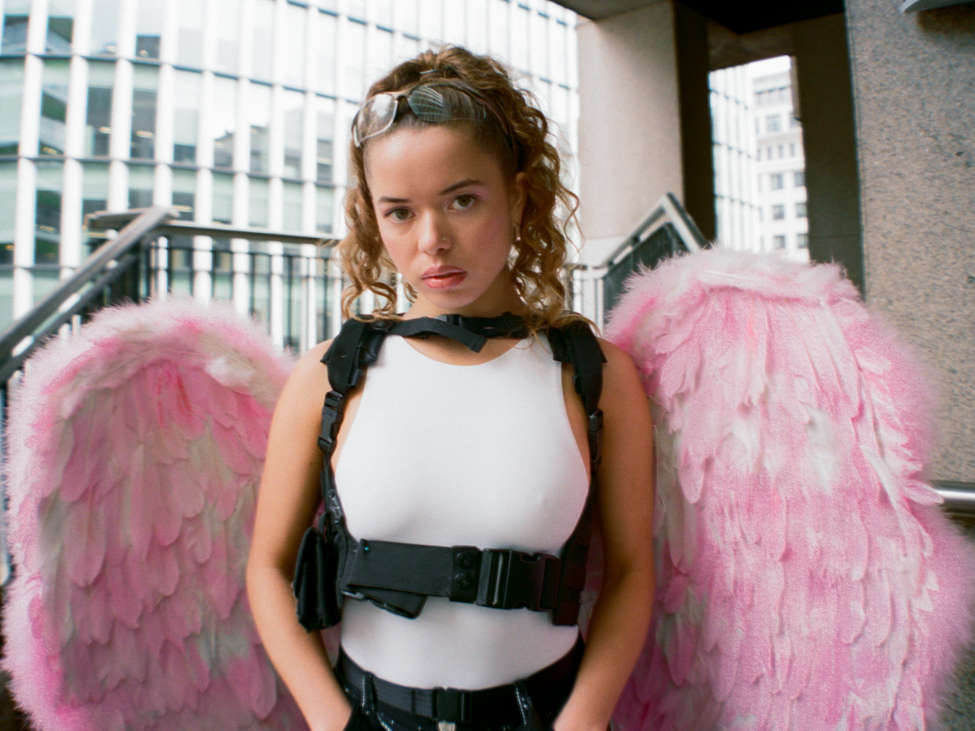 “I’ll always try to make things be nice, to make it work and look for harmony,” she says. “I don’t like arguing. I think that’s just how I am. But I think it kind of creates dishonesty in myself.”

This is the same “non-confrontational” Yanya who enraptured listeners in 2016 with her teenaged debut EP Small Crimes, on which she chillingly dismissed a player “boy” who just won’t stop speaking on the smoldering “Keep On Calling.” The singer-songwriter whose 2018 standout single “Baby Luv,” with its steely, “do you like pain, again, again?” chorus, delivered over a guitar riff that played like the tick of a time bomb, solidified her as a disciple of the PJ Harvey school of romantic flirtation.

It’s that palpable friction, of wanting to make things “nice” and tempering a curdling impulse to confront, that makes Yanya’s music thrilling. Her best songs start quietly like the flickering, blue beginnings of a stovetop flame, as she steadily cranks up the heat until her oblivious listener is alight in the loud, shred-heavy fire of her surly desire or disdain. She gives her audience roses, only to wilt them a second later with the shift of a few fingers on her electric guitar.

But whereas her 2019 full-length debut Miss Universe was airy and pop-leaning, Yanya’s grungier second album PAINLESS, out this Friday, solidifies the 26-year-old Londoner as a bonafide rock star. Miss Universe was brimming with synths and delicate bedroom pop, delivering a jazzy, mellowed-out Yanya. But PAINLESS is sparing and remarkably tougher, weighted by an instrumental sound that matches Yanya’s darker impulses as a singer and songwriter — drums that crack like whips, Either/Or-style acoustic guitar melodies, overpowering reverb.

“I think I realized, to me, my music always sounded like rock music, but maybe to other people it hadn’t,” Yanya says, adding that she used to worry about labeling her music in any particular way. “Now I’m like, it’s definitely rock music,” she says.

In some interviews around her excellent, genre-hopping debut full-length Miss Universe, Yanya wasn’t shy about expressing that the critically acclaimed album didn’t necessarily meet her expectations, a feeling that mostly still holds. “It sounds insane,” she says, laughing, of recently listening back to her debut. In a good way? “No, in a bad way,” she says. “Like, who let me put this out? There’s no filter on it.”

It’s why going into this album, she says, she didn’t want to crowd it with too many ideas. Produced in part by Miss Universe collaborator Wilma Archer, Bullion, Jazzi Bobbi and Andrew Sarlo, who has worked with artists including Big Thief and Madi Diaz, the project’s crunchier, ’90s rock texture positions Yanya as a stage-commanding presence. When you get to the album’s power ballad, the creeping “belong with you,” you can just imagine the dizzying potential lighting design worth programming to the plunging riffs of its chorus.

PAINLESS also anchors Yanya as a member of a fairly recent era of indie rock, wherein singular performers — Mitski, Phoebe Bridgers, Snail Mail — have taken up the mantle bands once occupied in the genre while honing equally stadium-worthy sounds. And while Yanya says that crafting the sound of PAINLESS made her feel like she was performing in a band, she understands indie rock’s trending individualism.

But with a voice often more soulful than sour, there’s been a tendency for critics to mislabel Yanya’s music. She often gets dubbed R&B, even if what she writes and performs goes harder than what any dubiously labeled rock act topping the Billboard charts pumps out these days.

“They still do that,” she says with a laugh, of critics’ mischaracterization. “Even with this record.” Is it just because Yanya, whose mother is Irish-Barbadian and father is Turkish, isn’t a white guy? “Yeah!” she says. “I don’t know…I don’t think it’s fair for either genre to say any of the stuff I’ve made is R&B.”

A self-described “sensitive person,” who admits she feels imposter syndrome “every day,” that reality doesn’t always manifest in the bitter cool of Yanya’s work. But there’s a numbed current of anxiety and exhaustion that runs through PAINLESS, in her writing and the album’s cutting production. “Late night, up all morning,” she sings, emotionless, on the jittery “stabilise,” “I could feel something, but it could be nothing.” Elsewhere, a strain of light masochism: “You can hurt me, if you feel like / If it feels good, then I’m alright,” she sings on the gorgeous, dream-pop outlier “shameless.”

Yanya circles around the boundaries of pain and desire often in her work. But thinking about pain — feeling it, inflicting it — isn’t just a theme in her songs, but the process of writing itself, mainly in letting go of making things harder than they need to be.

“Writing the record, even though I was struggling in the beginning, once we got going, it didn’t feel like I had [a] kind of suffering anymore — I was just making music,” Yanya says. “It was not easy, but it was easy to let it happen. And then I was like, why do I have this idea that everything has to be really hard when it comes to music? Why do other people have this idea that artists need to be suffering in order for their music to be good?”

Yanya’s music often tracks a release of pent-up feeling — emotions initially left unarticulated and softened, only to harden with honesty the second she’s realized she’s had enough. And that little revelation, that you don’t have to agonize over the truth of your experience in silence, comes through in her approach to songwriting.

“You have to work hard, everyone has to work hard,” Yanya continues. “I think there’s this notion that artists must go through some extra torment to deliver their best work. I just don’t think that’s true. I think it’s just because society doesn’t really value art.”

A musician from an early age — first piano as a child, then guitar — it wasn’t unusual to see the word “prodigy” alongside Yanya’s name as a teenager feted by outlets like the BBC. Still, there’s the sense for Yanya that she hasn’t quite reached the place she’d like to when it comes to making music.

“It’s almost like there’s another layer, or another place I need to go to in order to make the music I want to make next,” she says, adding that she’s thinking about a future in which she can produce herself, in a space of her own. “Before I did the first album, [I thought] the album is like a big wall and you’re walking closer and closer to it and then you get there and you do it and the wall goes down and you’re like, oh, I need to do another one.”

“I’m getting closer to something,” she says. “And I’m understanding now that an album is just another platform to jump off.”