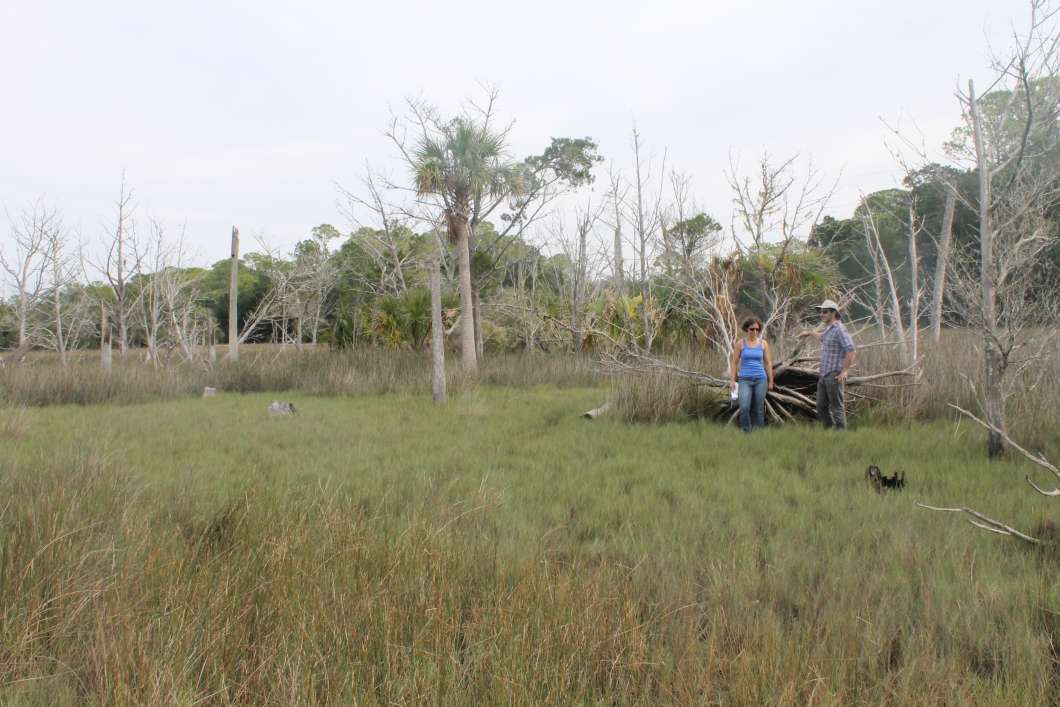 University of Florida scientist David Kaplan and Ph.D. student Katie Glodzik are studying ghost forests like this one at the Withlacoochee Gulf Preserve. Photo by Amy Green

Among the starkest markers of sea level rise are what scientists describe as ghost forests, coastal thickets left in waste by creeping salt water.

Scientists say it’s happening now at a dramatic rate and are working to understand the ramifications for the landscape, wildlife and local community.

David Kaplan wades into the waist-high black needlerush of the salt marsh.

In the distance tree islands loom green and lush with cabbage palms and red cedars. But not here. The dead trees look bony, skeletal. In some places the grassy black needlerush nearly has overtaken old stumps. This tree island is gone. Kaplan explains it is a ghost forest.

“You can actually look around into the marsh and find the stumps of the former outlines of this forest. So if we take a couple of steps into the marsh you’ll pass dead trees from decades past.”

From New Jersey to Texas scientists like Kaplan of the University of Florida are working to understand what they believe are bellwethers of accelerating sea level rise. They say ghost forests like this one in the Withlacoochee Gulf Preserve are among the first ecosystems to show a dramatic response to sea level rise, which to most people barely is discernable.

“These ghost forests have almost a poetic quality to them.”

Greg Noe has studied ghost forests for the last decade for the U.S. Geological Survey.

“Particularly on a foggy morning when you’re boating up these rivers, and you hit a patch of these dead, standing, gray tree trunks sticking out where they shouldn’t be, where they haven’t been before. It is a really dramatic site, and it really catches the public’s as well as the scientists’ imagination about what is happening. What are these? And why is it changing so fast now?”

Noe says forests of the Southeast especially are susceptible because here abundant rainfall and flat landscapes combine to create sensitive wetlands where fresh and salt water commingle in a delicate balance. He points to a study site on Georgia’s Savannah River.

“Within five years more than half, about three-quarters of those trees on those plots were dead because of salinization, creating a ghost forest much more quickly than we would expect that these new ghost forests would get formed.”

Ellen Klee has watched the forests of the Withlacoochee Gulf Preserve decline during her 13 years living in the area. Photo by Amy Green

At the Withlacoochee Gulf Preserve Ellen Klee climbs the steps of a 30-foot observation tower. She gazes out at the panorama of salt marsh, the expanse of black needlerush and cordgrass and sprinkle of tree islands. Klee has lived in the area for 13 years. The lush trees remind her of what once was. The dead ones signal what is to come.

“This used to be full vegetation. Now they’re sticks. You look across the way here to the south. Those were all lush when we first moved here. They’re dying.”

The preserve is unique in that scientists have studied sea level rise here for about quarter-century. During that time some tree islands have more than doubled their time under tidal flooding, although the rate of rise here is not unusual. The flat terrain means small change is transformative. The lowest trees are the most stressed. Researcher David Kaplan says the change is not all bad.

“The ecosystem can move. It can transition inland and upland, but only if we do things to protect and preserve natural areas in the places where sea level rise is going to cause these ecosystems to move.”

He says brackish estuaries are very productive. But for Klee the change is breathtaking. The preserve serves as an important habitat for wading birds. The surrounding area is popular for fishing and kayaking. She wonders about the wildlife and her community’s economy.

“Our habits, by changing them, could slow that down.”

For the ghost forests of the Withlacoochee Gulf Preserve that couldn’t be more urgent.