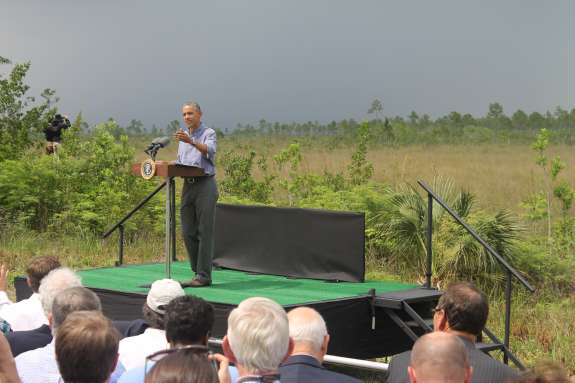 President Obama was in the Everglades this afternoon talking about the environment for Earth Day.

BRENDAN: So Amy, set the scene for us. Where was the president?

AMY: The president spoke at the Ernest Coe Welcome Center at Everglades National Park. He spoke on a riser behind a podium, the backdrop a sawgrass prairie of the Everglades.

BRENDAN: So it’s Earth Day. We know he was going to talk about climate change. What exactly was his message?

AMY: The president was in the Everglades to announce new protections for national parks as a means of guarding against climate change. He was highlighting his climate change policy by pointing to places like the Everglades that are affected by global warming in very real ways. In the Everglades rising sea levels are eroding the shorelines, increasing flooding and sending salt water into fresh drinking water supplies.

BRENDAN: And Amy, did he address Florida and the governor’s murky stance on climate change?

AMY: He did. Obama’s visit comes weeks after former state employees said the Scott administration banned them from using phrases like climate change. This drew a lot of attention nationally. The governor denies any such ban. Obama did make a passing reference to the controversy. He said in his speech that refusing to say the words doesn’t mean that climate change isn’t happening.

BRENDAN: And who was the president talking to?

AMY: The president addressed a small group of environmentalists and elected leaders like Debbie Wasserman Schultz.

BRENDAN: And Amy, finally, what does the president’s visit have to do with central Florida?

AMY: The Everglades ecosystem, it’s the watery spine of central and south Florida. The headwaters begin in central Florida with the Kissimmee River. The Everglade supports the drinking water of more than a third of Floridians.

BRENDAN: I’ve been speaking with 90.7’s Amy Green. She’s down in Everglades National Park. Amy, thanks for joining me.