On Day Of Funeral, Michael Brown’s Family Calls For Day Of Silence 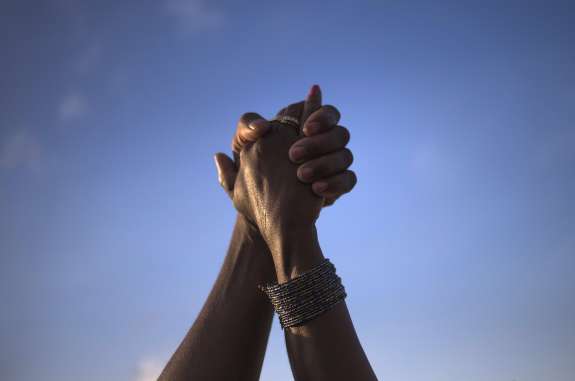 Supporters of the fatally shot Michael Brown hold hands in solidarity as they are led by Tracy Martin, father of Trayvon Martin, at the the Peace Fest rally in St. Louis on Sunday.
Image credit: Adrees Latif

After two weeks of sometimes violent protests, the family of Michael Brown will finally take some time to mourn.

In a funeral scheduled for 10 a.m. CT, the 18-year-old, who was unarmed when officer Darren Wilson shot and killed him Aug. 9, will be laid to rest.

As NPR’s David Schaper reports, during a rally at one of St. Louis’ biggest parks on Sunday, Michael Brown Sr. called for calm.

“Tomorrow, all I want is peace, while my son is being laid to rest,” Brown said. “That’s all I ask.”

“We don’t want anything tomorrow to happen that might defile the name of Michael Brown,” Sharpton said. “This is not about our rage tomorrow. It’s about the legacy and memory of his son.”

Reporting from Feguson, NPR’s Martin Kaste reported that things in the St. Louis suburb have calmed down quite a bit. The crowds have dwindled and the rage that burned just a few days ago had turned.

Still, some protesters vowed to continue to march until the government hears their voices.

We’ll update this post as the day progresses, so make sure to refresh the page for the latest.