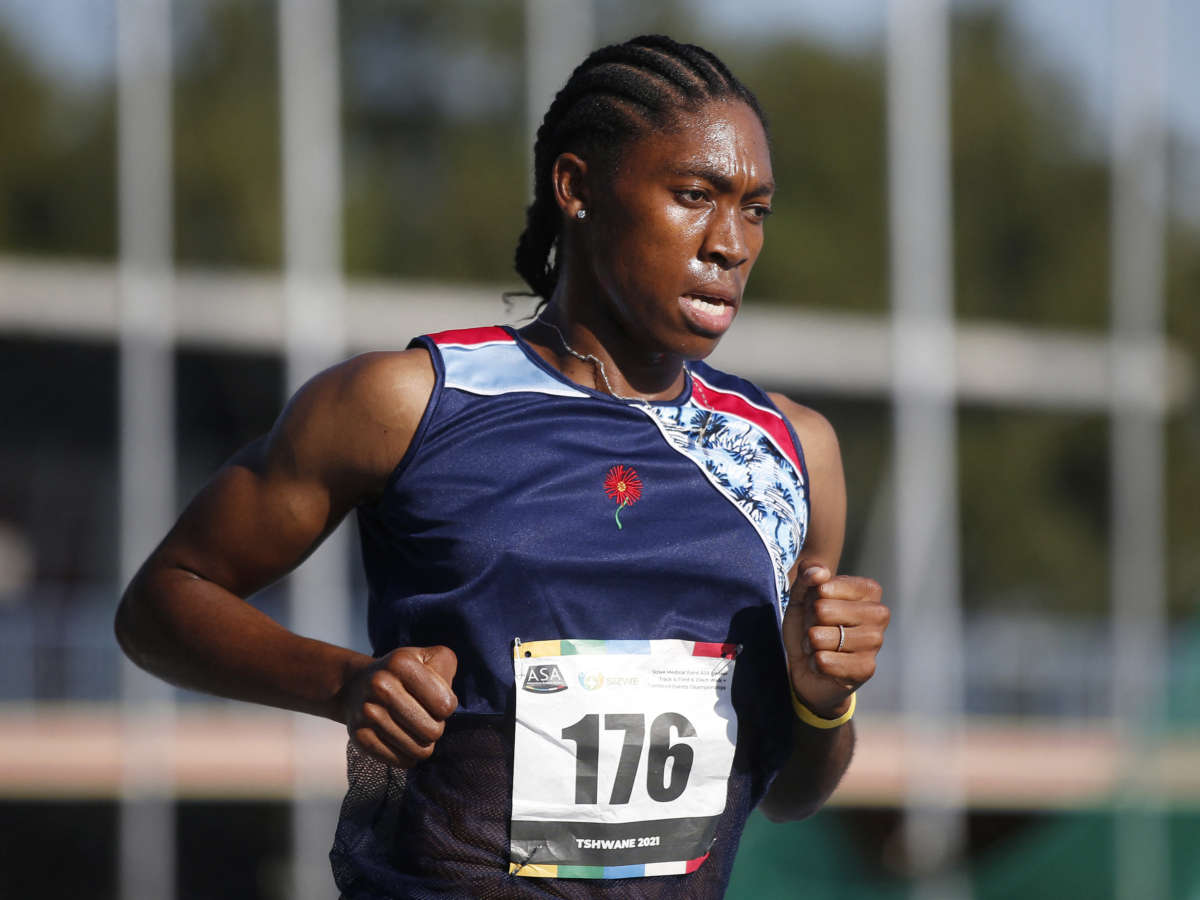 As track and field competition gets underway at the Tokyo Olympics, you won’t see one of the sport’s brightest stars: two-time Olympic gold medalist Caster Semenya of South Africa, the world’s fastest woman in the 800 meters.

That’s because of new rules from track’s governing body, World Athletics. Under the rules, Semenya and other female athletes who refuse to lower their naturally high testosterone levels are barred from competing in races from 400 meters to one mile.

Female eligibility rules have been fought over in court for years and have raised heated debate about fairness and inclusion.

The debate hinges on this question: should women athletes with what’s called a difference of sexual development, or DSD — who have XY chromosomes and elevated testosterone levels — be allowed to compete in the female category?

Or does their genetic makeup give intersex athletes an unfair advantage in a world of sport that’s divided along binary lines of sex?

Advocates argue that Semenya was just born this way

In defense of Caster Semenya, one of her sponsors, the beauty brand Lux, recently launched a “Stand With Caster” video campaign.

It opens with a cascade of voices doubting Semenya’s fundamental identity.

“I have to say, it’s hard to believe Caster’s a woman,” says a man.

“Identifying as a woman doesn’t make you one,” adds a woman.

The chorus goes on: “There’s nothing feminine about her.” “That’s not a woman. She is a he!”

But Caster was simply born this way, the narrator says, with “special gifts.” The video ends with this message: “Lux believes that women should not be judged for how they look. That no woman should ever be stripped of being a woman.”

Defenders of the testosterone regulations argue that the rules have nothing to do with how athletes look and do not strip away any athlete’s womanhood.

Instead, they contend, the rules are simply tailored to create a level playing field and ensure fair competition for women in sport.

“We know that there is a difference between male bodies and female bodies,” says Duke University law professor Doriane Coleman, a former elite runner who was an expert witness in the Semenya case, testifying in support of the regulations before the international Court of Arbitration for Sport, or CAS.

“We know that without sex-segregated sport and eligibility standards that are based in sex-linked traits, we would never have the chance to be elite athletes,” Coleman says.

Semenya has been in a long legal battle to “run free”

Under World Athletics’ regulations, in order to compete in the restricted events, the affected DSD, or intersex, athletes are now required to lower their testosterone levels with birth control pills, hormone shots or surgery.

“No freakin’ way!” she told an interviewer on South African television. “Why? For who? For who? No!”

Semenya, 30, was raised female, identifies as female and is legally female. She was just 18 when she blew away the field to win her first World Championship in the 800 meters in Berlin. Her blistering speed and physique raised suspicions, and afterward, she was required to take a sex verification test. The battle over her eligibility, along with that of other athletes, has been waged ever since.

Ultimately, Semenya took her case to CAS, which ruled against her in 2019, judging that the testosterone regulations were “necessary, reasonable and proportionate” to “[preserve] the integrity of female athletics.”

Her subsequent appeal to the Swiss Federal Tribunal also failed. This year, she launched a new appeal to the European Court of Human Rights, which has not yet ruled on the case.

In a tweet announcing her latest appeal, Semenya wrote, “All we ask is to be able to run free as the strong and fearless women we are!!”

This fight is not just about me, it’s about taking a stand and fighting for dignity, equality and the human rights of women in sport. All we ask is to be able to run free as the strong and fearless women we are!! Thank you to all of those who have stood behind me✊🏽 pic.twitter.com/0PdBiujH8b

Semenya has long claimed that the rules are specifically designed to keep her out.

Speaking at a women’s empowerment conference in Johannesburg in 2019, she said, “When you’re the best in the world, people get obsessed, you know, with what you do.”

Former Olympic racer Bruce Kidd agrees with Semenya on that: “I don’t think it’s unfair to call this the Caster rule,” he says.

Kidd is a retired professor at the University of Toronto and a longtime advocate for gender equity in sport. In his view, the Tokyo Games will be seen as an “asterisk Olympics,” since some of track’s best female middle-distance athletes are not competing.

“Some women have been excluded simply because of a very narrow definition of their gender,” Kidd says. “And I think because the Olympic movement prides itself on its support of human rights, we have to call their exclusion a stain on the Tokyo Olympics.”

Why, Kidd asks, is this exclusion acceptable?

“Sport has always been about embracing difference and including; you know, the celebration of diversity,” he says. “Most outstanding athletes are outliers. Most outstanding athletes have longer reach or more fast-twitch fiber or they’re taller. And we admire them for that. We admire them for what they’re able to accomplish. But it’s only in the case of women’s sports where this drive for biological sameness is carried to this extent.”

Who decides what is “woman” enough?

So, what criteria should determine who can race as a woman? And who draws that line?

Those are questions on the mind of Tlaleng Mofokeng, a doctor in Johannesburg who focuses on sexual and reproductive health.

She also serves as the U.N. Special Rapporteur on the Right to Health.

“There is a definite history of people seeing certain women as not woman enough,” she says. “This idea, right, that some women are more woman than others… It’s a visceral problem, the issues of femininity: who owns femininity, and who gets to decide what that looks like?”

Consider that the women who have publicly run afoul of the gender verification rules are all from the Global South.

In the Tokyo Games, along with Semenya, the other runners who have said they’re affected by the rules are all African: from Kenya, Burundi, Niger and Namibia.

That includes all three women who won medals in the 800-meter race at the 2016 Rio Olympics: Semenya, Francine Niyonsaba of Burundi and Margaret Wambui of Kenya.

“These binaries that we have in sport don’t match up to the world,” says Amira Rose Davis, assistant professor of history and African-American studies at Penn State and co-host of the feminist podcast Burn It All Down.

“Sports must maintain this really, really violent binary at all costs, no matter who it hurts,” she says. “And right now, that burden, that pain, that harm is most keenly felt by women of the Global South…. It’s just been heart-wrenching to follow.”

For Dr. Mofokeng, the female eligibility rules amount to the policing of Black women’s bodies: a remnant of what she sees as patriarchal, colonial power.

“It’s racism!” she says. “And we must ask those people who are doing this why they are doing it… and why is it so sustained and so cruel?”

Defenders of the rules say they level the playing field

But Duke law professor Coleman, who is biracial, calls that charge of racism “really disturbing.”

“Black women know,” she says, “just like all other people, that without sex-segregated sport, whether you’re a black woman or a white woman, you don’t have a chance.”

The rules, she says, preserve competitive space and podium opportunity for women, since sport is divided by sex for very good reason: testosterone provides advantages in strength, power and endurance.

“When there’s a podium sweep by [intersex] athletes,” as there was in Rio, she says, “you’re not keeping your commitment to providing sex equality and competitive sport. And you’ve got a failure of the regulations.”

World Athletics declined NPR’s interview request for this report, but sent a lengthy statement, saying in part, “Our female eligibility regulations do not target any single athlete or race…. There is copious evidence that black women are thriving and being celebrated in our sport, that it is in fact the most accessible sport for black women.”

Earlier this year, Semenya attempted to qualify for the Tokyo Games in the 5,000 meters, an event that’s exempt from the testosterone rules, but she fell short.

That could spell the end of Semenya’s Olympic career. But for many South Africans, her impact remains powerful.

“She’s inspiring,” Justin Abrams told NPR this week, in an informal sampling of public opinion among residents on the streets of Cape Town. “She should run no matter what.”

“She means a lot,” added Thuleka Muvalo. “To me, they defeat her rights.”

“Absolutely,” she says. “She is, she was, she will always be. She will have her own chapter in our history. Caster still has the heart of many of us.”

Meanwhile, as Semenya awaits the delivery of yet another court ruling in her long-running case, she anticipates another arrival: last week, she announced that her wife, Violet Raseboya, is pregnant with their second child.

In an Instagram post, Semenya wrote, “Ten little fingers, ten little toes. With love and grace, our family grows. This precious soul that God decided to bless us with. We all can’t wait to meet YOU!”