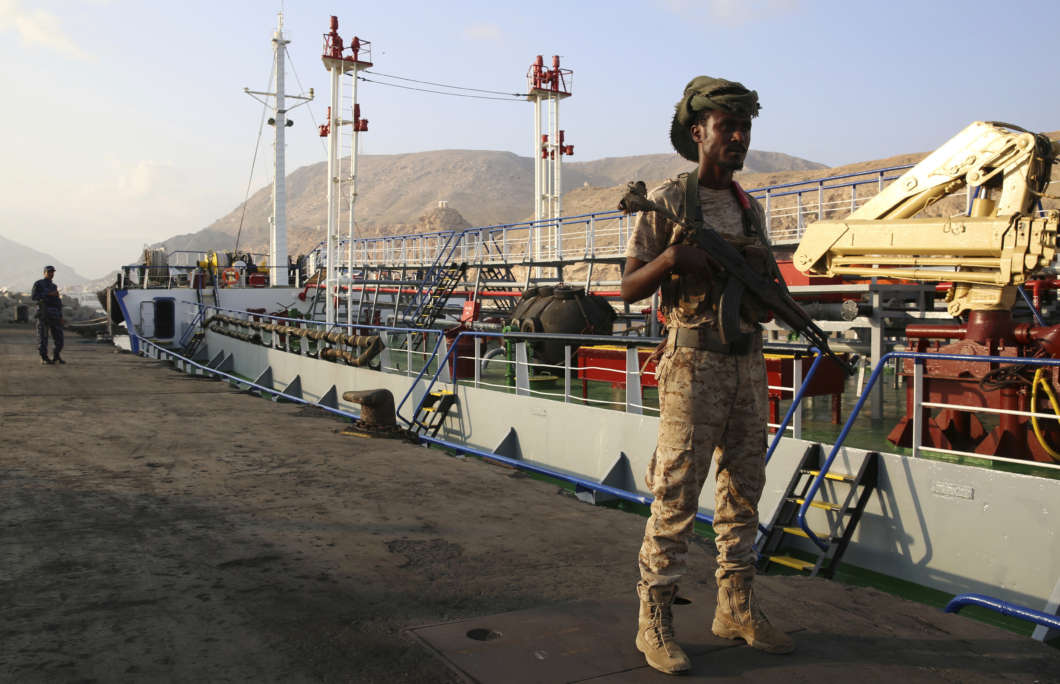 Yemeni militiamen stand guard at the port in Mukalla, on the southern coast of Yemen. Many factions are involved in Yemen's civil war. The U.S. has supported Saudi Arabia, which has waged a bombing campaign against Houthi rebels. But the U.S. Congress is putting pressure on the Trump administration to end its support of a war that's widely seen as a stalemate and a humanitarian disaster.
Image credit: Jon Gambrell

In most cases, though not all, Trump and his two immediate White House predecessors launched these U.S. military actions without explicit approval from Congress.

“Congress has been silent while the executive branch continues to assert its power,” said Rep. Ro Khanna (D-Calif.).

But something is stirring in Congress. There’s growing sentiment to force the president to end U.S. involvement in a war.

In this case, it’s Yemen.

The killing of Saudi Arabian journalist Jamal Khashoggi, by Saudi officials, set off a chain of events that’s led Congress to become much more vocal in opposing U.S. military aid to Saudi Arabia, which is fighting Houthi rebels in Yemen.

“There’s certainly no authorization for helping the Saudis in the civil war against the Houthis,” said Khanna, who’s pushing a measure that would block this U.S. military support.

His attempts this year have been stymied so far, but that could change when Democrats take control of the House in January.

A Senate measure failed back in March. But in a sign of the changing atmosphere, the Republican-controlled Senate voted 63-37 recently to debate the issue, and that debate could begin this week.

Both chambers have based their efforts on the 1973 War Powers Resolution. Congress passed that resolution at the end of the long U.S. involvement in the Vietnam War, which was carried out with no clear declaration by Congress.

“It’s often a tool that’s more used in political negotiations between Congress and the president that are often resolved through a kind of political mechanism,” said Scott Anderson of the Brookings Institution and the Lawfare blog.

The Constitution says only Congress can declare war. But the last time Congress formally did so was 77 years ago — the day after the Japanese bombed Pearl Harbor on Dec. 7, 1941.

Congress has taken steps other than declaring war, such as authorizing the use of military force after the 2001 attacks by al-Qaida. Lawmakers passed another measure authorizing military action a few months before the 2003 U.S. invasion of Iraq.

But these congressional moves did not set any geographic or time limits on military action. Presidents George W. Bush, Barack Obama and now Trump have all cited the 2001 resolution as authorization for smaller operations in Syria, Yemen, Somalia, Libya and Niger.

In effect, presidents have learned how to bypass lawmakers.

“Limited military engagements can often create a lot of space by which the president can act without even really having to deal with Congress,” said Anderson.

That’s what happened in Yemen.

Three years ago, Obama approved U.S. aid to help the Saudis with their bombing campaign against the Houthis, who had taken over key parts of Yemen, including the capital.

“The U.S. began doing a number of things,” said Gregory Johnsen, who was part of the United Nations panel of experts on Yemen until earlier this year.

“They provided refueling to the Saudi-led coalition and they also provided intelligence. The Saudis would bring a list of targets that they wanted to hit and the U.S. would say, ‘Well, we think these actually are not military targets,’ ” said Johnsen, the author of The Last Refuge: Yemen, al-Qaeda, and America’s War in Arabia.

The war is widely seen as a stalemate. Civilian casualties have been high. Millions are at risk of starvation in Yemen, considered the world’s worst humanitarian crisis.

The warring parties opened peace talks last week in Sweden, but there’s no sign so far of a big breakthrough.

In Washington, even key Senate Republicans, like South Carolina’s Lindsey Graham, are now speaking out.

“I cannot support arms sales to Saudi Arabia. The war in Yemen has gotten out of control,” Graham said recently.

“The Trump administration has argued that we’re providing intelligence support, we are providing arms and training and advice and intelligence information, but we are not directly participating in hostilities,” said Anderson.

Trump has said little about the war, but remains strongly supportive of the Saudis.

Rep. Khanna says the U.S. military should continue to pursue al-Qaida and the Islamic State — which is also part of the U.S. involvement in Yemen.

But he thinks support for the Saudi military campaign is counter-productive — and Congress has the right to stop it.

“There a reason the Founders wanted Congress to be influencing matters of war and peace,” Khanna said. “Congress, they thought, would be less likely to go to war. And Congress is directly accountable to citizens who are going to bear the cost of war.”