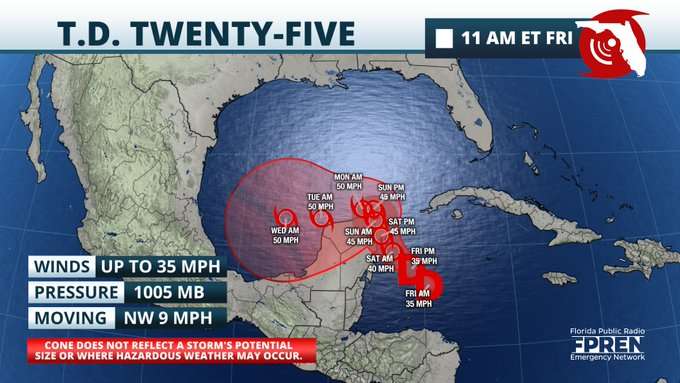 The brief lull in the tropics has to come an end with the classification of the season’s 25th tropical depression.

Meteorologist Megan Borowski says the depression is headed toward Mexico’s Yucatan Peninsula, but some moisture from it may contribute to heavy rain over the Florida Peninsula this weekend.

“Moisture high in the atmosphere from the tropics is interacting with a cold front that is stalled over South Florida. The front will slowly move north through the state this weekend, which means locally heavy rain and areas of flash flooding are possible.”

Megan says the depression is likely to become a tropical storm this weekend as it crosses the Yucatan Peninsula and likely moves slowly into the Southern Gulf of Mexico.

She says direct effects to Florida are unlikely through early next week.