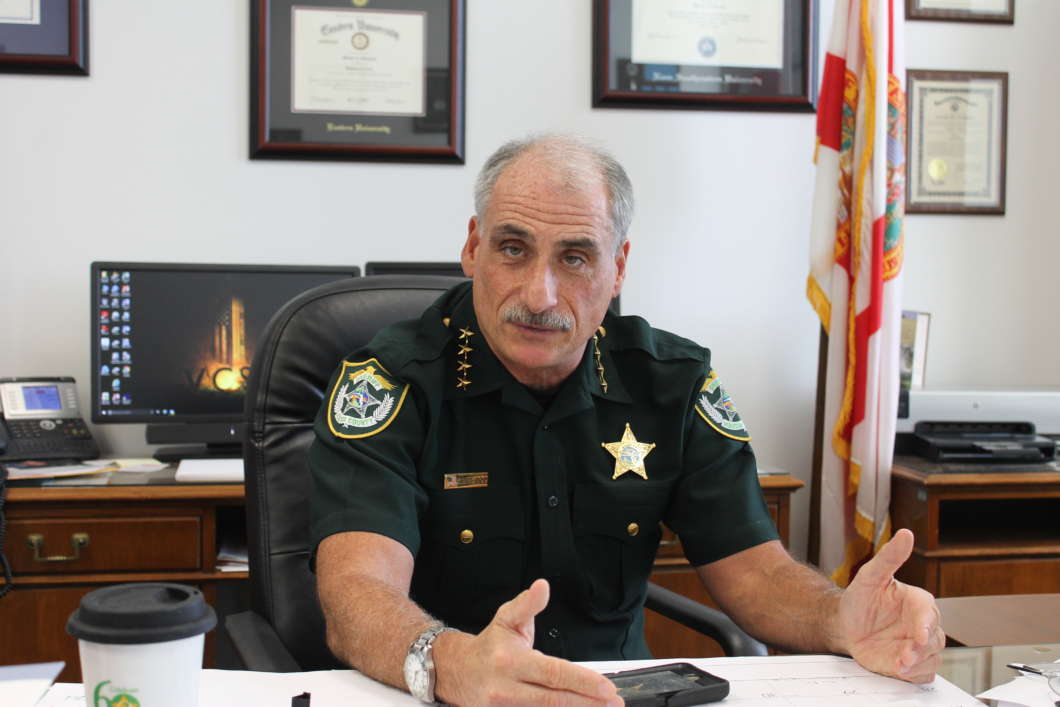 In a tweet Tuesday night, Chitwood wrote that the county DoH said it would no longer provide addresses that are being monitored for COVID-19.

“With so much community spread, they say the effort is too time consuming, and all first responders should be wearing PPE in close contacts anyway,” wrote Chitwood

He told WMFE when his dispatchers send out sheriffs, police, fire, or EMS, they need to be prepared via a COVID-19 code.

“They can be told, ‘be advised it’s a COVID-19’ – the deputies or the first responders know that they need to don their PPE gear. Obviously, we don’t have a ton of PPE gear, so we need to be judicious and use it when we need it.”

The Volusia County Sheriffs Office had been publicly sharing the data – minus names and addresses – to make up for what the sheriff calls “a void of steady leadership and a lack of accurate and honest information.”

3+ months ago, I started posting numbers of locations flagged for covid in each Volusia city because I believe we all deserve access to info to make informed decisions. Not everyone agreed w/ me, including some of our local officials who have proven to be failures at leadership.

The Volusia County Department of Health could not be reached in time for broadcast.

Rosen Hotels has announced it will lay off a significant number of staff at the end of this month.

In a statement, the company said it needs to “undergo a substantial reduction in workforce” at all of its hotels because of the downturn caused by the pandemic. Rosen has eight hotels in the Orlando area.

He said the company had kept as many staff on as it could since the beginning of the pandemic, in the hopes that business would return to normal by June.

Most of the company’s hotels have been closed since April.

Marion County’s school reopening plan is a collaborative effort. Administrators, parents, board members, union leaders and even students on four committees crafted the strategy. It’s designed to educate kids- and open the schools – while keeping everyone safe during a growing pandemic.

At a meeting Tuesday, some teachers doubted that is possible.

The School Board approved the plan unanimously.

Board Chairman Eric Cummings said the whole plan, even the Aug. 10th start date, is flexible during what he calls “Hurricane Corona.”

Each family will choose between traditional in-school learning and online education. They have until next Wednesday to decide.

Florida added 10,044 new coronavirus cases among residents yesterday, according to the latest numbers from the state Department of Health.

Florida now has had 223,783 positive coronavirus cases, including 3,291 non-residents.

48 Florida resident deaths were reported yesterday, bringing the state’s death toll from COVID-19 to 3,991, including 102 non-residents.

Currently, 43 hospitals in Florida have zero beds available in the intensive care unit, including five hospitals in Orange and Osceola counties.

Aboraya said hospital bed capacity is one area to watch.

He said Orlando Regional Medical Center in Orlando has 65 patients in the ICU and no beds available, according to the Agency for Health Care Administration.

“Now that sounds scary. But in reality, what we’re seeing is more of a staffing issue than a lack of raw beds and ventilators,” said Aboraya.

“In a statement, Orlando Health says it has 200 ICU beds available – and can surge up to 500 ICU beds if needed.”

Health experts point to contact tracing as one of the most effective ways to stem the steep rise of coronavirus cases in Florida.

Dr. Cindy Prins, UF epidemiologist said the demands on contact tracers are growing sharply as they try to reach more people who may have been exposed to the virus.

People may feel inconvenienced by the phone calls from tracers, she said. But it is a necessary step in the state’s efforts to stop the spread of the disease.

“Really, all they’re trying to do is try to prevent more cases of COVID-19. So I really would ask them sincerely to please talk to these contact tracers and let them do their job to help protect other people.”

Prins was a guest Tuesday on The State We’re In – a Facebook Live show from WUSF and WMFE.

The group All Voting is Local is encouraging online voter registration in Florida, while calling on state leaders to make sure the website can handle an influx of registrations.

The group’s Florida director, Brad Ashwell, said the system tends to fail at inopportune times – like right before an election – because of the sudden traffic.

“It was fairly predictable, and it happened here in 2018 both before the August primary and the November general election, and it’s happened since then intermittently,” sai Ashwell.

“So we’re really hoping the state will take every step to ensure that it’s robust and working well in the coming weeks and coming months.”

The group says more than a million Americans couldn’t vote in 2016 because of problems at the polls. So they’re promoting the vote-by-mail option as being secure and safe during the pandemic.

“It’s the safest way to avoid long lines at the polls. It’s been used in Florida since 2012. Both parties have used it successfully. Any instances of fraud have been caught and adjudicated. I mean, there might be some that got missed, but there’s no real evidence that there’s a systemic fraud problem.”

To avoid having their ballot rejected, Ashwell said those using vote-by-mail should follow the rules closely regarding signatures and the deadline for submission.

The ballot must be received by the Supervisor of Elections no later than 7 p.m. on Election Day, with other options available for military and overseas voters.

Orange County School Board members met Tuesday to discuss how to reopen schools next month for the coming academic year.

The school board members considered an array of concerns from how to ensure children wear masks and wash hands to what to do should a child test positive for the coronavirus.

The meeting came as case numbers surge in Florida. Some board members asked Raul Pino of the state health department in Orange County whether now is the right time to reopen schools.

“If the question is, Is it safe to open the schools as we were operating before you closed? No. Procedures and guidance have to change. The schools, if you guys decide to open it, they have to open in a different environment.”

State Education Commissioner Richard Corcoran in an executive order is calling on “brick and mortar” schools to reopen five days a week and offer the full slate of services for all students.