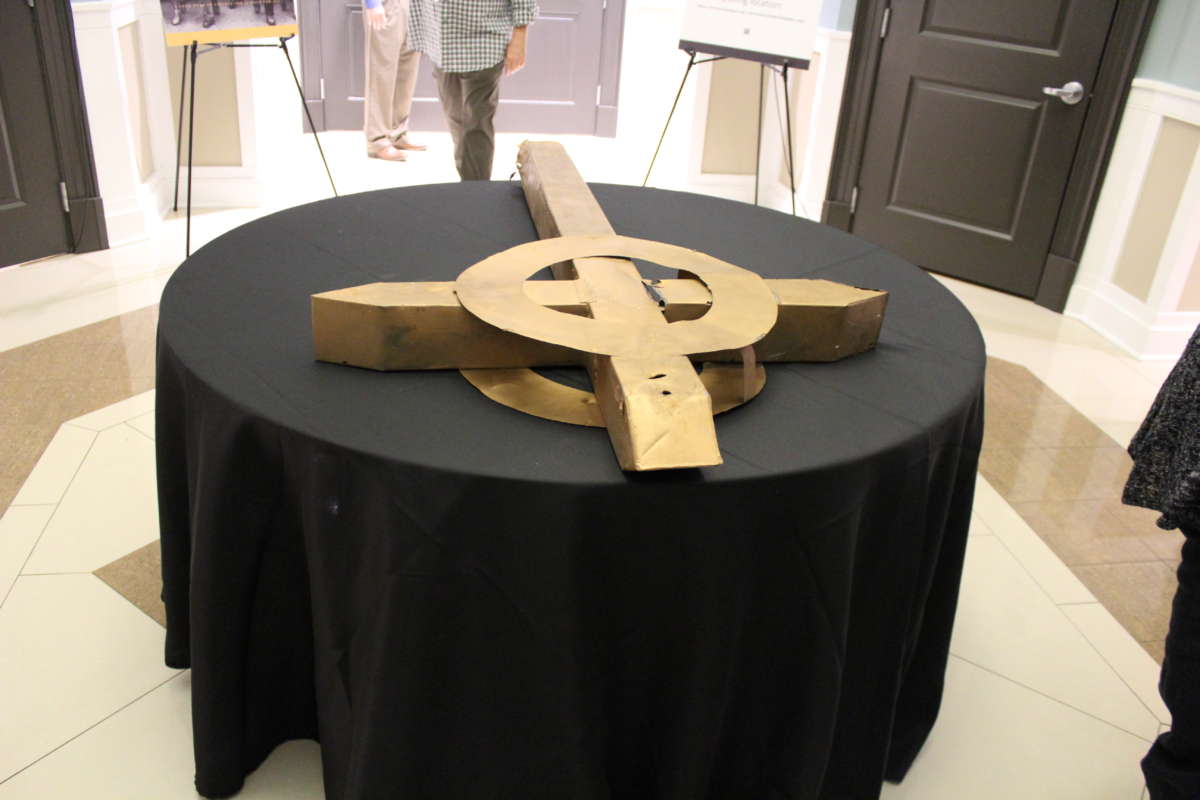 The cross from a church in Ocoee where congregants sheltered Black residents fleeing the massacre. The cross is marked with bullet holes from shots fired by Ku Klux Klan members. Photo: Matthew Peddie, WMFE

The city of Ocoee is remembering the victims of the election day massacre one hundred years ago. City leaders will unveil a historic marker this Sunday.

The unveiling caps a week of events aimed at reckoning with the city’s painful past- and acknowledging the worst incident of voting day violence in US history.

The massacre began on November 2nd, 1920, when African American residents tried to exercise their right to vote. Julius ‘July’ Perry was lynched, and a white mob killed an untold number of residents, burned their homes and churches and drove the survivors from the city.

On Wednesday night the names of all 252 people who were affected- either killed or forced to flee-  were read aloud in a ceremony at Ocoee’s Lakeshore center.

Highpoint Church Pastor Keith Tower, who is white, apologized to the descendants of the victims on behalf of white people and the church.

Then he invited attendees to walk silently through the town. A few days before election day 1920, he said, the Ku Klux Klan had marched silently through Orlando and Winter Garden to intimidate Black residents.

“We are going to walk in silence, with our heads held high, because we are not afraid,” said Tower.

The procession passed the lake where the bodies of the murdered residents were thrown- and the Ocoee Christian Church- where the white congregants were said to have sheltered fleeing black residents.

The church bell tolled a hundred times- once for each year since the massacre. Ocoee police provided an escort.

“It was a solemn moment when I can look up and see the Ocoee police department standing with us, protecting us as we walk through the streets of Ocoee,” said George Oliver III, the city’s first elected African American commissioner.

Oliver, who took office in 2018, said even now most residents of color are apprehensive about walking the streets at night.

Commissioner Larry Brinson Sr. said Ocoee is working to address the injustice of the past.

“And then subsequent to that, in 2020, I became mayor pro-tem, so Ocoee’s moving absolutely in the right direction,” said Brinson.

“There’s always work to be done, but we’re doing the right thing.”

Mayor Rusty Johnson, who is white, said he wants the descendants to know Ocoee is not the place it was 100 years ago. City leaders signed a letter of apology this week, and on Sunday they’ll unveil a marker commemorating the massacre.

“It’s something that I believe, in faith, that we should do.”

Descendants have thanked city and county leaders for acknowledging the massacre. But many of them say an apology is just the first step- families should be compensated for the stolen land.

An effort last year by state senator Randolph Bracy to get compensation was unsuccessful.

But the call for reparations was repeated on Monday during an Orange County event paying tribute to the descendants.

J. Carl Devine, whose grandparents John and Roxie Williams fled Ocoee after their church and home were burned, said the Ocoee massacre is an emotional stain that continues to this day.

“We weren’t there but we experienced that pain for a long time and we still do,” said Devine.