Obamacare Helped The Homeless, Who Now Worry About Coverage Repeal 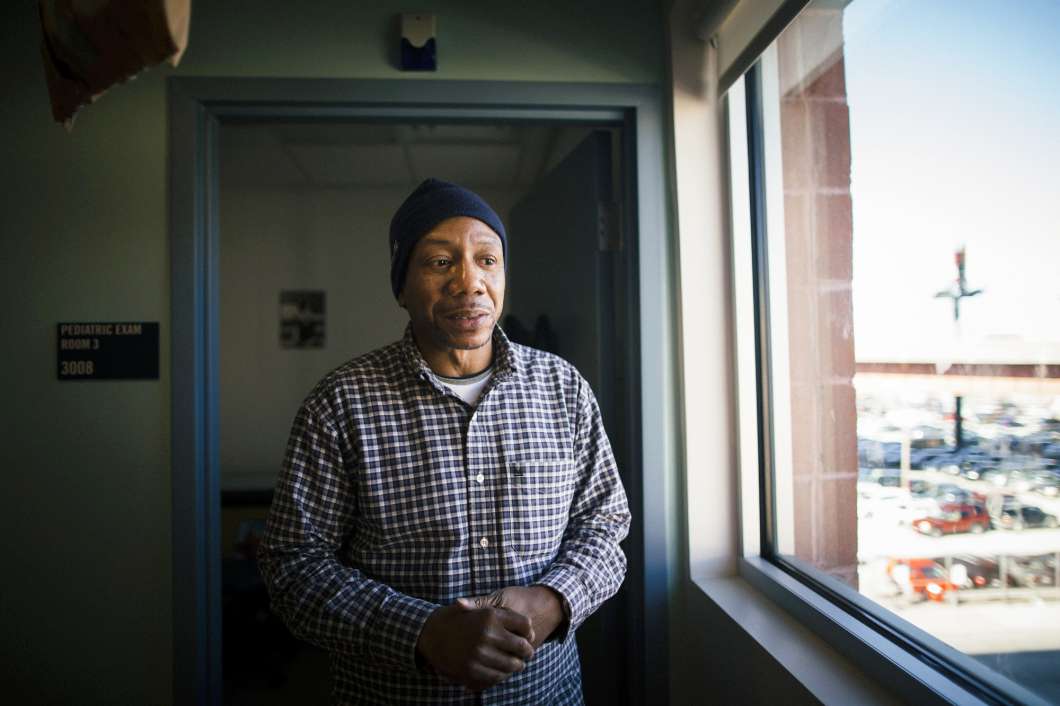 Joseph Funn experienced homelessness for almost 20 years, until he moved into an apartment in December.

Everyone expects Congress to change the Affordable Care Act. But no one knows exactly how.

The uncertainty has one group of people especially concerned — the homeless. Many received health coverage for the first time under Obamacare; now they’re worried it will disappear.

Joseph Funn, homeless for almost 20 years, says his body took a beating while he lived on the street.

Now, he sees nurse practitioner Amber Richert fairly regularly at the Healthcare for the Homeless clinic in Baltimore.

At a recent visit he mentioned that he’d been having some chest pains.

“And when exactly did you quit smoking?” Richert asked.

In December, he said, when he moved into his first apartment in decades.

That was a big change for the 56-year-old. Last winter, Funn was living outside and trudging through deep snow for days. His left foot got so swollen, he could hardly walk.

“It was frostbite,” he recalled. “I thought when you had frostbite, it’s like when you turn purple and blue. But when I came to see Dr. Amber, she said, ‘No, that’s when they have to cut something off.’ So I was like, ‘Whoa!’ ”

Funn was admitted to the clinic’s convalescent center to be treated. The staff also signed him up for Medicaid, the government’s health insurance program for the poor and disabled.

Like many people who are homeless, Funn was uninsured. But under the Affordable Care Act, Maryland is one of 31 states and the District of Columbia that expanded Medicaid to cover nondisabled childless adults.

Healthcare for the Homeless President Kevin Lindamood said before Obamacare, only 30 percent of the patients they saw had health insurance. The group provides health care to people without homes as well as others who are in transition to more settled lives.

He said the change allowed Healthcare for the Homeless to open new clinics, including one for dental care, and to double the number of clients that can be seen. The group also hired more outreach workers to encourage homeless people to come in for help.

Homeless advocates have argued that better health coverage should eventually reduce costly emergency room visits. They also say coverage can help people get off the streets by dealing with chronic problems, such as mental health issues, that might keep them outside.

Lindamood said his clients are now worried. “We’re working with very vulnerable people who are now coming to us, hearing the news in general and saying, ‘Wait a minute, I just got access to care. Does this mean I’m going to lose it?’ ” he said.

Republicans have promised to replace Obamacare but haven’t said how. President Trump has said no one will lose coverage.

But White House counselor Kellyanne Conway has also said the administration hopes to turn Medicaid into a block grant — meaning states would get a set amount of money, along with more control over how to spend it.

The approach has supporters.

But others are skeptical. Barbara DiPietro, policy director for the National Health Care for the Homeless Council, says block grants will likely mean less federal funding for Medicaid, forcing cash-strapped states to make tough choices about whom to cover.

“So when we talk about no one will lose coverage, that’s heartening,” said DiPietro. “But the details are always very important. What does that coverage look like? The population we serve typically falls through the cracks.”

Almost 900,000 patients are served by Health Care for the Homeless projects around the country. At the end of 2015, two years after Obamacare went into effect, about half those patients had Medicaid coverage.

Joseph Funn said losing Medicaid would be a hardship for him, but he also thinks there are a lot of people on the streets of Baltimore who are worse off than he is. “I can see them cutting me and giving the money to the people that need the most help,” he said. Now that he has his own apartment, he plans to get healthier so he won’t need as much care.