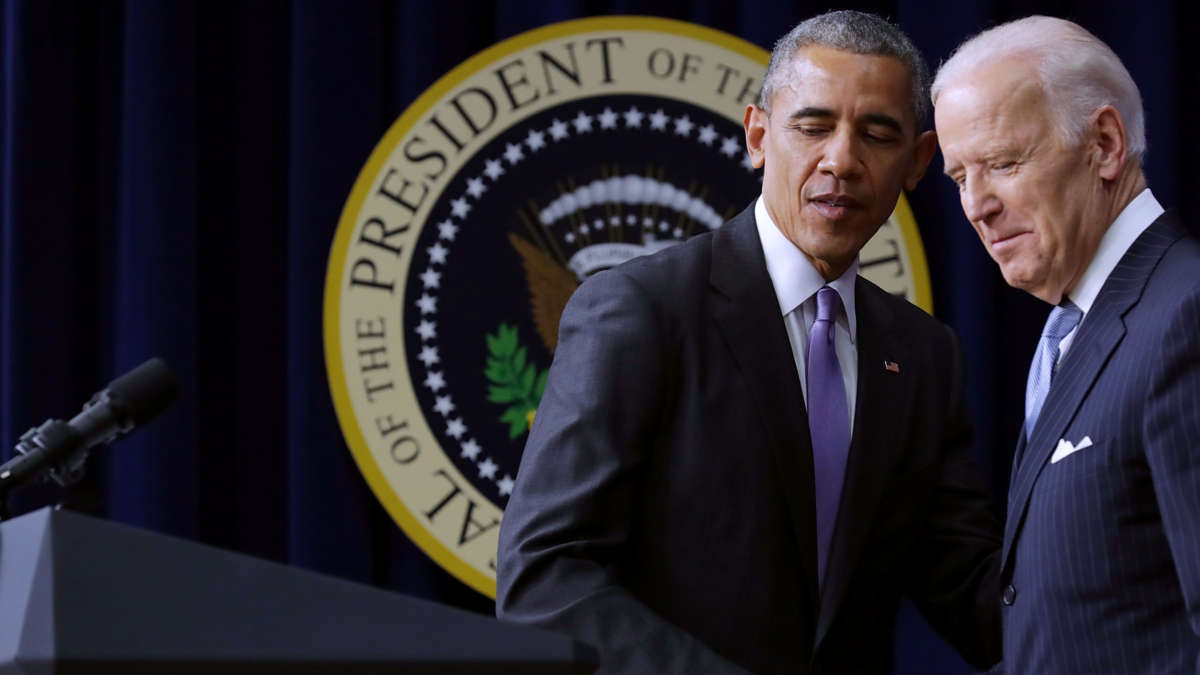 President Obama and then-Vice President Joe Biden appear at a bill signing in Dec. 2016. Late in his term, Obama was using executive actions to advance much of his agenda in the face of congressional opposition. President Trump was unapologetic about taking such actions, which some Democrats think should be Biden's approach.
Image credit: Chip Somodevilla

President-elect Joe Biden won the presidency in large part because he promised to be the anti-Trump on policy, temperament, tone and just about everything else. But two men who helped run the Obama White House are urging him to follow President Trump’s example in a specific way: by unapologetically leaning on executive actions to implement key policies.

The advice from former Obama chiefs of staff Rahm Emanuel and Denis McDonough comes as Biden prepares to enter office with an agenda potentially stalled by a closely divided Congress: a much smaller House majority than expected and a 50-50 Senate, at best.

“There is — as President Trump himself has demonstrated with the consent, quite obvious consent of Republicans in Congress – an enormous amount of leeway for the president to institute executive action on things like immigration and energy and climate policy,” said McDonough, who served as chief of staff for much of Obama’s second term.

Obama himself signed many high-profile executive orders and pushed for broad administrative rules changes on environment, education, immigration, and labor policies, among many other areas. But unlike Trump, most of Obama’s high-profile orders came once his party lost its majorities in Congress and major legislation was no longer an option.

“Trump changes that, and moves aggressively on executive orders – a multitude of them on multiple fronts,” said Emanuel, Obama’s first chief of staff. “Everything on immigration, etc., without any legislation.”

Many orders are already in the works. Speaking to MSNBC on Thursday, incoming Biden chief of staff Ron Klain promised a “sack” of executive orders Biden will sign on his first day in the Oval Office.

Many of those actions will be amount to a redoing of Obama administration policies that Trump has spent four years undoing: “Protecting the DREAMers, for example, starting on day one,” Klain said, referring to the Deferred Action for Childhood Arrivals program Trump tried to end. “Rejoining the Paris Accords for climate change starting on day one, reversing some of the environmental rollbacks we’ve seen from President Trump.”

Large swaths of Biden’s pandemic response will involve executive actions, too, including tapping the Defense Production Act to manufacture more personal protective equipment and setting up a World War II-inspired “Pandemic Testing Board” to coordinate and speed up test distribution across the country.

But the sweeping, New Deal-style agenda Biden promised was premised on the idea of winning control of the Senate, in addition to keeping the big majority that House Democrats won in 2018. That’s not the landscape Biden will face in January.

Still, McDonough, Emanuel and other Democrats are confident Biden can deliver many of the same results through the executive branch.

“There’s no reason that President-elect Biden should not use the authority that’s available to him,” said McDonough, who’s now a professor at Notre Dame’s Keough School of Global Affairs.

Neither man is arguing Biden should ignore the legislative branch where he served as a senator for decades. McDonough said, “There are certain things you just have to do with Congress.”

Biden himself talked frequently during the campaign about his experience working across the aisle and the need for bipartisan cooperation. In his post-election speeches he has repeatedly called for an end to gridlock and constant partisan warfare.

But Emanuel, who ran the White House during Obama’s window of large legislative majorities, knows perhaps more than anyone that political capital can be limited. So, he argued that Biden should pack as much as possible into executive orders. “The fewer things you have to clog up the legislative pipeline with allows you to concentrate your political capital in that legislative front,” he said.

Biden has made it clear he’ll make climate change a top priority. At first glance, his much-discussed $2 trillion plan to wean the economy off fossil fuel and onto clean energy seems dead on arrival if there is a Republican Senate, but Jamal Raad, the co-founder of climate advocacy group Evergreen Action, has flagged more than 40 broad executive actions in the climate policies the Biden campaign has already laid out.

“You don’t have to speculate” on what a Biden climate agenda looks like in divided government, he argued: “His plans were littered with pretty significant executive actions on the climate crisis.”

A Biden administration can impose new energy efficiency rules on buildings, appliances and machinery, it can limit new leases for oil and natural gas drilling on federal property, and it can factor climate impacts into scores of regulatory actions across a broad range of agencies.

Raad pointed to vehicle emissions standards as one enormous area of executive influence. “The executive has incredibly authority over mileage standards for cars and trucks,” he said. “Ramping up production of electric vehicles is an incredible opportunity to lower carbon emissions.”

Most importantly, a Biden Administration could use existing Clean Air Act authority to write new rules to force power plants to shift to renewable energy.

Of course, the Obama Administration tried to do that, and the Supreme Court blocked their regulation from going into effect before Trump overturned it.

The judiciary has gotten much more conservative over the past four years. But McDonough, who lived through all those court fights, still thinks it’s possible to advance a Biden agenda with executive actions.

Still, even if those orders aren’t struck down by the courts, the past four years made it very clear that they could always be undone by the next president.