Obama: Iraq Must Have Legitimate Government To Combat Insurgency 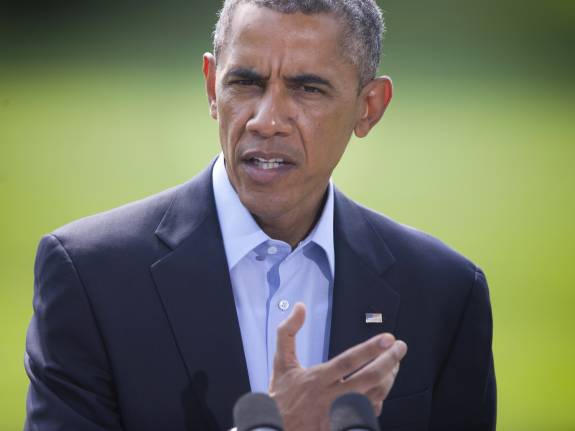 President Obama speaks on the South Lawn of the White House in Washington, on Saturday. He said the situation in Iraq amounts to a "long-term project."
Image credit: Pablo Martinez Monsivais

President Obama says that the U.S. will continue to provide Iraq with humanitarian and military assistance, but he ruled out ground troops and reiterated administration calls for Iraq to form a “legitimate” government in order to face the threat from Islamic militants.

Speaking to reporters in the South Lawn of the White House, he also acknowledged that U.S. intelligence had underestimated the speed with which Islamic State militants have advanced on the ground.

“In the absence of an Iraqi government, it is very difficult to get a unified effort of Iraqis against ISIL,” the president said, referring to the Islamic State of Iraq in the Levant, also known as ISIS or IS.

“The nature of this problem is not one that the U.S. military can solve,” he said. “We can assist … [but] we can’t do it for them,” adding that the situation was “a long-term project.”

Referring to ethnic Yazidis trapped on Sinjar mountain in the country’s northwest, where the U.S. has airdropped food and water, Obama said the they needed a safe corridor or some other mechanism to allow them to escape. He said they reportedly number “in the thousands and moving them is not simple.”

He said he’d spoken to British Prime Minister David Cameron and French President Francois Hollande and that the two leaders had offered their support in ending civilian suffering in Iraq.

Obama declined to offer a timetable for the U.S. operation, but said that for now he did not see needing to ask Congress for additional funding.

The president appeared to bristle at a question about whether he had second thoughts about not leaving U.S. troops in Iraq.

He said he was surprised by the “degree to which this issue keeps coming up.”

“Under the previous administration, we turned over Iraq to a sovereign government,” he said. “We had offered to leave additional troops and they declined.

“That entire analysis is bogus and wrong, but it gets peddled,” he said. It “presupposes that I would have overridden [the decision of a] sovereign Iraqi government.”