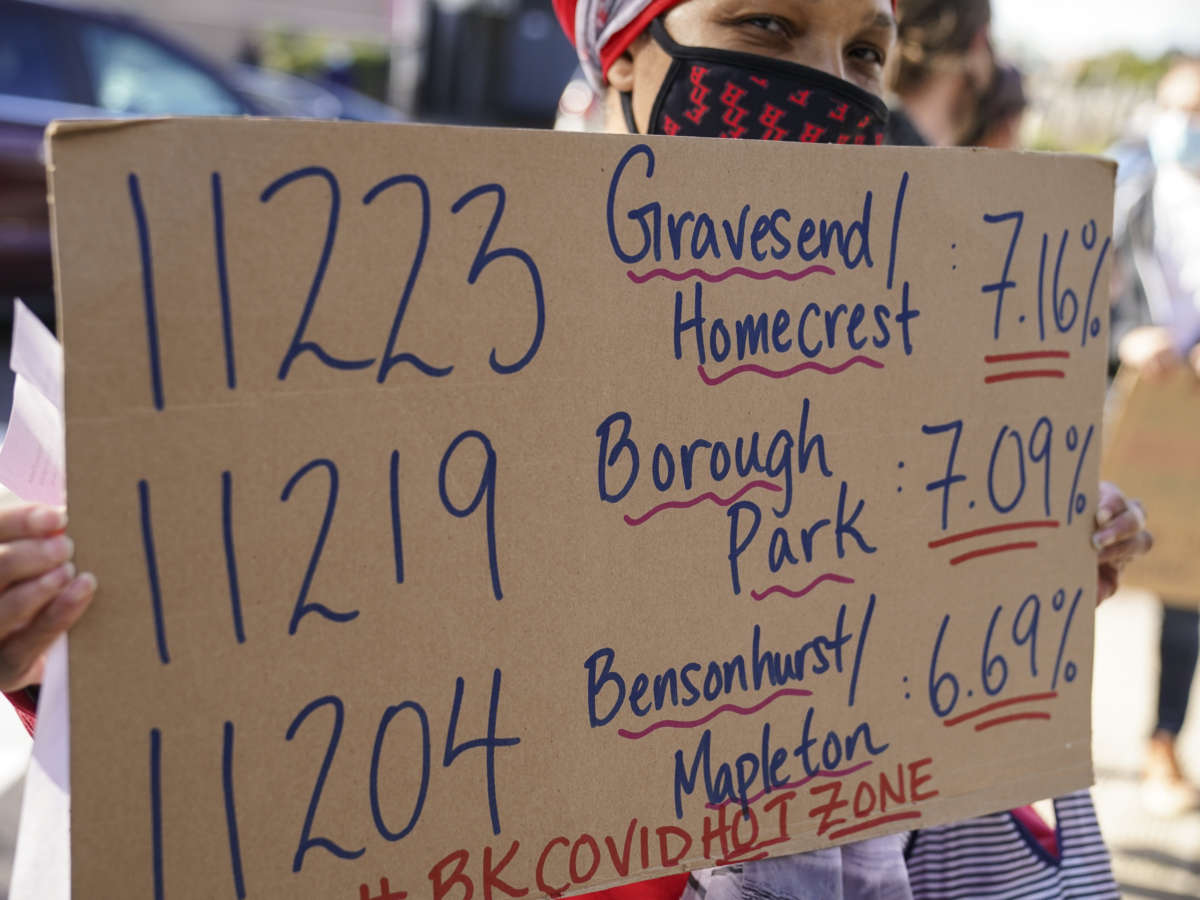 Teachers and staff protest outside Franklin D. Roosevelt High School as they call for more and better COVID-19 testing and precautions on Friday in New York City. The ZIP codes listed on this sign are among those soon to face restrictions by the city.
Image credit: John Minchillo

Facing an increase in coronavirus infections in certain neighborhoods, New York City Mayor Bill de Blasio announced Sunday that he would close all nonessential businesses, public and private schools, and daycares in nine ZIP codes throughout Brooklyn and Queens, to ensure that the virus doesn’t spread further.

Assuming Gov. Andrew Cuomo approves the plan, the closures would begin on Wednesday. Cuomo did not comment on whether he would approve the plan on Sunday, but said in a tweet, “Local governments have not done an effective job of enforcement” in certain “hotspot ZIP codes.”

“It pains me to be putting forward this approach that we’ll need, but in some parts of our city — in Brooklyn and Queens — we are having extraordinary problems,” de Blasio said. “Something we haven’t seen since the spring.”

After initially leading the nation in positive coronavirus tests, New York City was able to get the virus under control earlier this year through strong messaging on the importance of social distancing and the widespread closures of businesses. But in recent weeks, city officials and residents had been watching the numbers tick back up, particularly in Orthodox Jewish areas.

The areas de Blasio mentioned in Brooklyn and Queens have been above a 3% positivity level on testing for seven or more consecutive days. That necessitates additional action, de Blasio said. “It is necessary to stop the spread of the coronavirus in these communities and beyond.”

Indoor and outdoor dining will be suspended in these areas. Pick-up and delivery orders will still be permitted.

The ZIP codes encompass areas in Central Queens, Southern Brooklyn and Far Rockaway. They correspond with areas with a high Hasidic Jewish population. “We are concerned about how Covid-19 may be affecting Orthodox communities — in these neighborhoods and beyond,” Patrick Gallahue, a spokesman for the city’s Health Department, said in late September, The New York Times reported.

Of the nine areas highlighted, seven had experienced a positive test rate above 3% for the past two weeks. And some of those areas, especially in Far Rockaway and Southern Brooklyn, are seeing a 14-day positivity rate as high as 7 or 8%.

There has been very little coronavirus activity within the schools, but de Blasio said they need to be closed “out of an abundance of caution.” If after two weeks the areas drop back below a rolling seven-day 3% positivity rate, the restrictions could be lifted, he said.

An additional 11 ZIP codes are approaching 3% positivity rates as well, and the city plans to watch them very carefully. They include several areas of Williamsburg, and additional areas in Southern Brooklyn and Central Queens. The city will engage in “intensive outreach efforts” to test and enforce guidelines, de Blasio said.

Places of high-risk activity such as indoor dining, gyms and pools will be closed there beginning Wednesday, he said.

“This will not be easy at all,” the mayor said. “But it’s something that we believe is necessary to keep this city from going backwards, towards where we were months ago.”