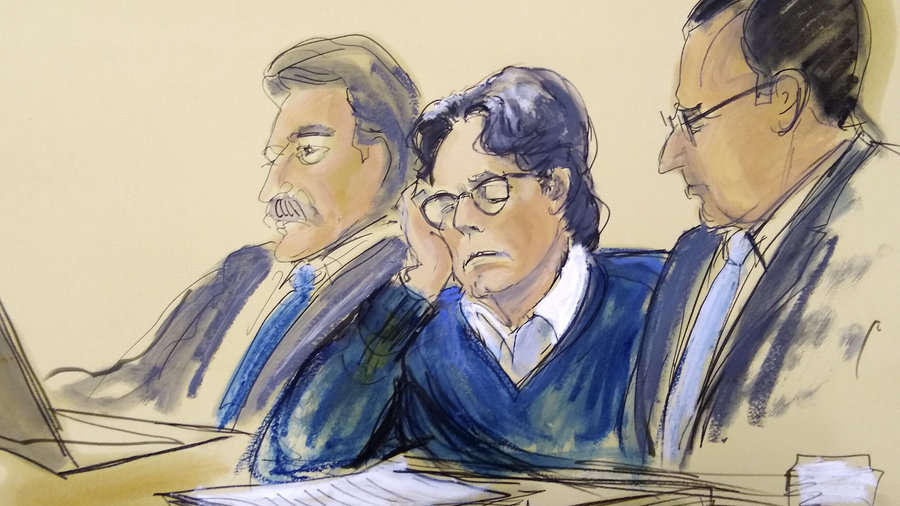 FILE - In this June 18, 2019 courtroom artist's sketch, defendant Keith Raniere, center, sits with attorneys Paul DerOhannesian, left, and Marc Agnifilo during closing arguments at Brooklyn federal court in New York. Raniere and his lawyers filed a motion Monday, March 9, 2020 for a new trial, arguing that two witnesses perjured themselves when they denied they were planning to sue him after the trial. A jury convicted Keith Raniere in June on all counts of sex-trafficking and coercing women into sex. (Elizabeth Williams via AP, File)

“I can still hear his voice in my head,” the woman in her early 30s told the Brooklyn courtroom Tuesday, her voice shaking.

“He robbed me of my youth,” the woman, Camila, told the court, according to the New York Post. “He used my innocence to do whatever he wanted with me.”

At the end of Tuesday’s sentencing hearing, in which victims of NXIVM cult leader Keith Raniere recounted their stories in sometimes painful detail, the 60-year-old Raniere was sentenced to 120 years in prison.

Camila was one of 15 victims scheduled to testify against Raniere on Tuesday, part of an attempt by federal prosecutors to secure a life sentence for the defendant. He has been in prison since jurors found him guilty last year of sex trafficking, forced labor conspiracy, human trafficking and multiple counts of racketeering.

Victims painted a picture of a charismatic self-help guru who lured followers with promises that he would help them take control of their lives. But once ensconced in his orbit, many of the women were indoctrinated by Raniere, who pressured them to have sex with him, and even branded his initials on their skin with a cauterizing pen.

“He screwed with my mind for so long,” said Camila, the first of several victims to speak during the victim-impact section that preceded Raniere’s sentencing in federal court, the New York Post reported. She was 15 years old and a virgin when Raniere raped her, she said. Camila said her sexual relationship with Raniere lasted 12 years.

The abuse went beyond the physical. She said the cult leader, then in his mid-40s, manipulated her psychologically, to the point where she isolated herself from friends and family, so she could be his, alone. The Daily Beast reports she told the court she decided to speak up as a way of getting her voice back and “coming to terms with the trauma and the abuse.”

Former NXIVM member India Oxenberg told the court Raniere was a sexual predator who forced her to lose so much weight that she stopped menstruating. According to the Independent, she lamented that she “may have to spend the rest of my life with Keith Raniere’s initials seared into me.”

Defense attorneys argued that Raniere is innocent and blamed his conviction on a “media campaign” that led to an unfair trial. Multiple documentaries have been produced about NXIVM (pronounced “Nex-ee-um”), which some have also likened to a pyramid scheme. His attorneys had asked U.S. District Judge Nicholas Garaufis for a maximum sentence of 15 years in prison.

NXIVM was publicly advertised as a professional development company that offered seminars attended by an estimated 18,000 people since the 1990s. It offered intensive therapy courses lasting several days and claimed to help people overcome major trauma by “integrating” those experiences into their lives.

But the group also demanded loyalty to Raniere, who was known to followers as the guru named “Vanguard,” believed by some of them to be an “evolved” being.

Prosecutors said Raniere had created a secret group within NXIVM, called DOS — an acronym for “Dominus Obsequious Sororium,” which translates to “Master Over Slave Women.” The women were expected to turn over incriminating photos that could be used against them if they ever tried to leave.

One of Raniere’s co-conspirators, 41-year-old heiress Clare Bronfman, was sentenced this month to nearly seven years in prison for fraud and forced labor as one of the executives of NXIVM.